Dermot O’Leary has expressed his shock over ‘how little notice’ travellers are receiving as Portugal is taken off the green list, saying he ‘couldn’t believe’ the turn of events.

Earlier this week, it was announced that Portugal had been removed off the travel green list, meaning that from Tuesday, British holidaymakers returning from the country will have to quarantine for 10 days.

Speaking about Portugal being moved to the amber list, transport minister Grant Shapps said: ‘We simply don’t want to take the risk as we come up to 21 June and the review of the fourth stage of the unlock.’

On Friday’s edition of This Morning, Dermot and Alison Hammond were joined by travel expert Simon Calder, who emphasised how expensive it can be for travellers to fill out the necessary forms during their journeys.

‘And for the thousands, tens of thousands of people who are waking up in Portugal suddenly to find that two weeks ago, they were told, “Off you go, have a lovely time, send us a postcard,” now they’re being told you have got – well I make it – 90 hours and counting to get back to the UK otherwise you are going to be unfortunately having to self-isolate for 10 days,’ Simon said.

‘This is it Simon,’ Dermot responded. ‘The thing I thought when I saw the story last night was I couldn’t believe how little notice they’re giving people?’ 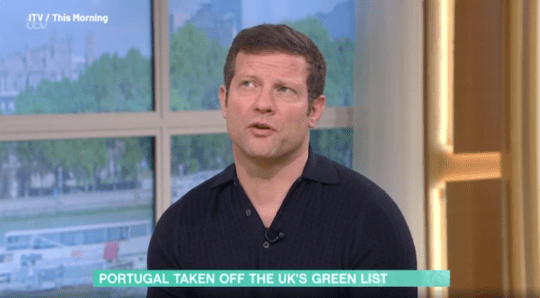 Dermot was shocked by how quickly the announcement was made (Picture: ITV)

Simon stated that the short notice ‘goes against everything we were told two months ago by the transport secretary Grant Shapps’.

The travel expert added that he has spoken to holiday firm TUI, who is ‘working out how to send bigger planes to Portugal this weekend to bring back all the people who, desperately sadly after waiting over a year for an escape, are having to come home early’.

Several This Morning viewers expressed their view that members of the public must accept that they shouldn’t go on holiday, with one person tweeting: ‘I have no sympathy for anyone that books a summer holiday abroad this year and gets caught out! You take the risk.’

‘To the people going on holiday, let me ask you; what’s more important? Your health and potentially not contracting a virus or getting burned in a foreign country for two weeks?’ another remarked.

If you’ve got a celebrity story, video or pictures get in touch with the Metro.co.uk entertainment team by emailing us celebtips[email protected], calling 020 3615 2145 or by visiting our Submit Stuff page – we’d love to hear from you.