THERE are plenty of perils when it comes to skating live in front of ­millions of TV viewers on Dancing On Ice.

But while most people might think falling flat on your bottom would be the worst-case scenario, for ­Myleene Klass it was actually her decision to wear the wrong-sized knickers. 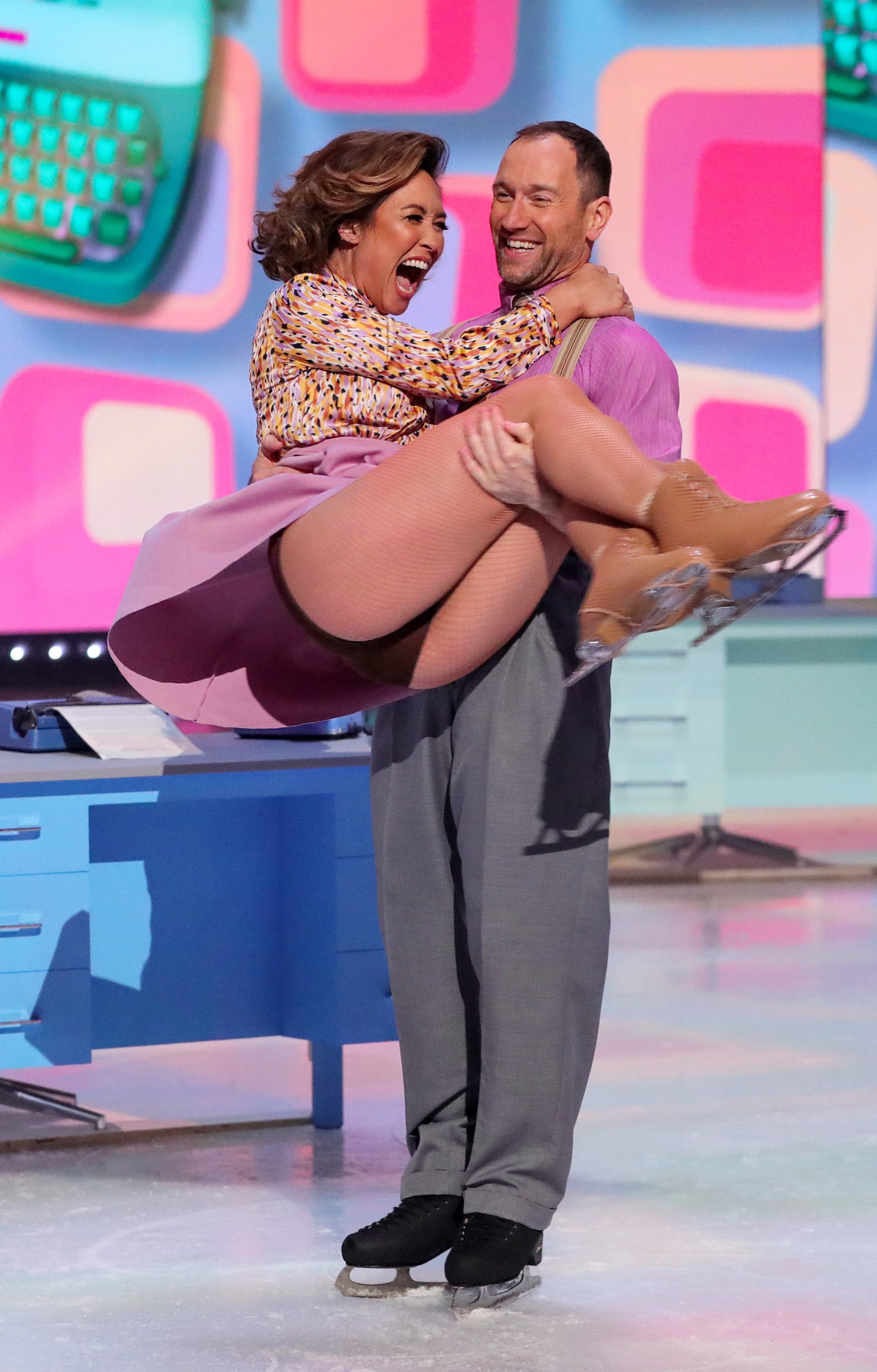 Taking to the ice four days ago for the ITV skating contest’s first ever group dance — to Dolly Parton’s 1980 hit, 9 To 5 — she accidentally flashed her pants.

And speaking ahead of her first solo skate this Sunday, Myleene says she has learnt her lesson when it comes to her choice of smalls.

Recalling the moment her pro ­skating partner Lukasz Rozycki lifted her up, revealing her black briefs, ­Myleene says: “A lot of people were excited it was Dolly Parton’s 9 To 5. A lot of people liked my hair, and a lot of people said I should have worn bigger pants . . .

Despite her very own Bridget Jones moment, Myleene’s first televised spin on the rink was impressive.

The 42-year-old wowed in a mini-skirt and pussy-bow blouse and looked more than at home on the ice. 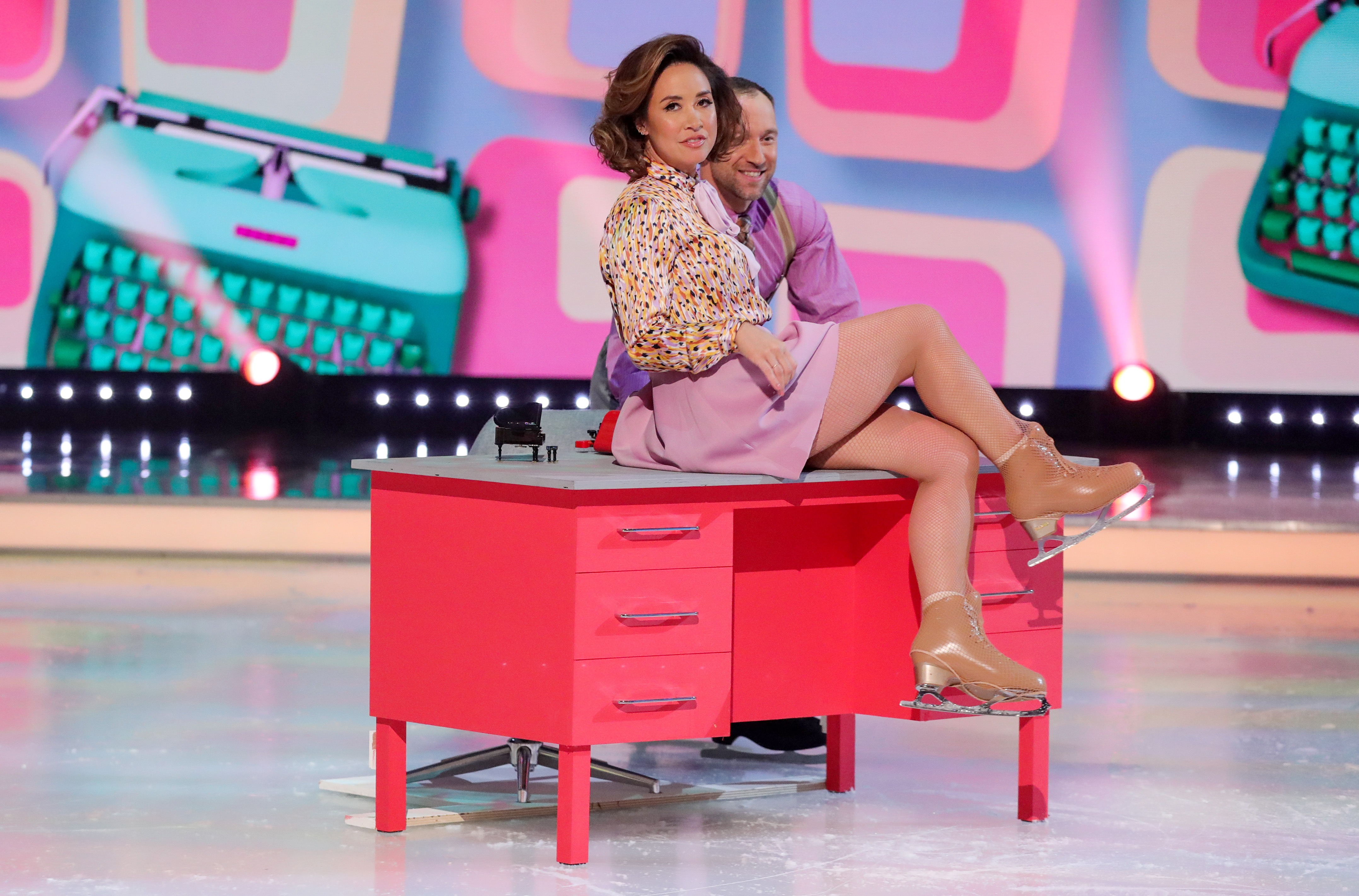 The 42-year-old wowed in a mini-skirt and pussy-bow blouse Credit: Rex Features

But getting to this point has not been easy. Myleene’s training has been blighted by a nasty knee injury which came about as a result of their brutal training regime.

This week doctors confirmed the Classic FM DJ had a torn meniscus — cartilage in her knee. But Myleene is confident she can get past it.

The mum of three says: “It’s not the sexiest injury, is it? I’ve got a nana knee. I was saying earlier — all my dreams have been about skating and now this nana knee injury.

“It is very painful, but it’s just not very sexy when you say your knees have gone. I’m like the Tin Man. Every morning I have to oil, manipulate and move things before I can even think about getting out of bed.

“But it’s all par for the course. I’m just waiting for the skating to make me stronger. I thought it would make me super-fit but it’s quite unforgiving. I want a J-Lo butt, a skater’s butt, but I didn’t consider all the other aches and pains that come with it.

“A lot of the pro girl skaters have said you get the butt but you can’t do too much with it because you’re also covered in bruises. I am moving joints and parts of my body that I didn’t even know I had. It’s all been traumatic.” 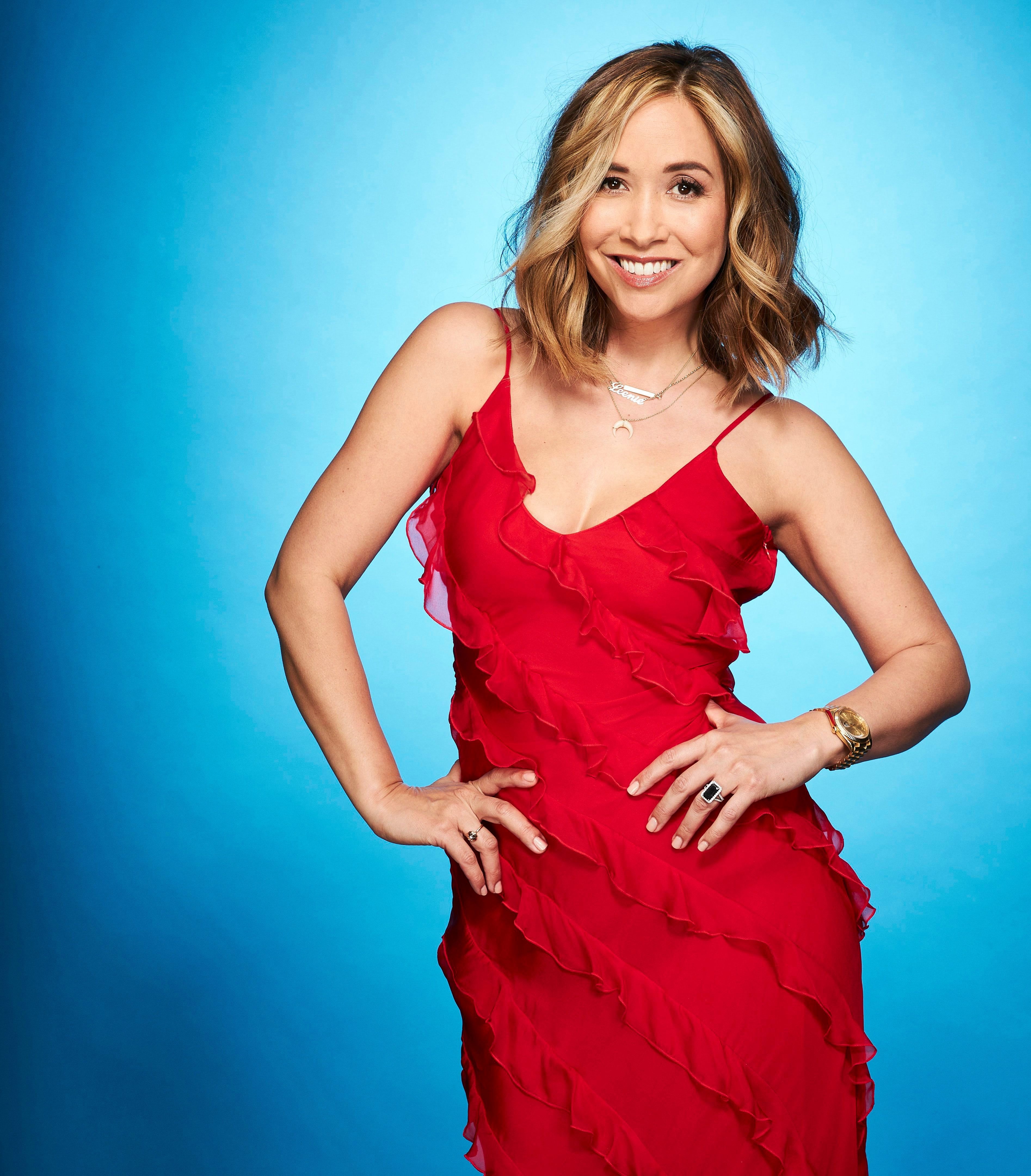 Despite her very own Bridget Jones moment, Myleene’s first televised spin on the rink was impressiveCredit: Rex Features

Alongside picking up the nasty injury in training, Myleene reveals she has also suffered blackouts on the ice because of the fast-paced moves she is learning with Lukasz.

She warned that fans will watch one such incident play out on Sunday night, as cameras caught Myleene ­hitting her head on the ice when she briefly lost consciousness in training.

She explains: “I have banged my head on the ice already. I didn’t realise that when you do the spins, you can have a mini blackout when you get dizzy.

“So we were doing a spin and when I watched the footage back, the next thing you see is a banged head. Wait until you see the footage — you won’t believe it.

“We were doing the rehearsals last week and I didn’t realise it was a blackout, as it’s a very weird feeling. You don’t realise it is happening.

“I hold my breath because I am so scared, but that’s not the right thing to do. I actually did it while I was stationary. Yes, I can fall over from stationary.”

So we were doing a spin and when I watched the footage back, the next thing you see is a banged head. Wait until you see the footage — you won’t believe it.

Myleene is keen to impress the show’s judges. And that’s no easy task considering that alongside Ashley Banjo, 32, and John Barrowman, 53, the panel features aces Jayne ­Torvill, 63, and Christopher Dean, 62, who struck Olympic gold ­skating to classical track Bolero.

But Myleene’s early success on the ice is already being lauded by her family at home.

She has daughters Ava, 13, and Hero, nine, with her ex-husband, former bodyguard Graham Quinn, 46, and in August 2019 welcomed a son, Apollo, with her fiancé, PR expert Simon Motson, 46.

The classical artist, who found fame as part of pop group Hear’Say in 2000, is also a devoted step-mum to Simon’s 13-year-old son and nine-year-old daughter.

During our interview, Hero stops by while on a break from lessons. Myleene reveals she is juggling the demands of the show with home-schooling and is relishing returning to the ice this weekend. 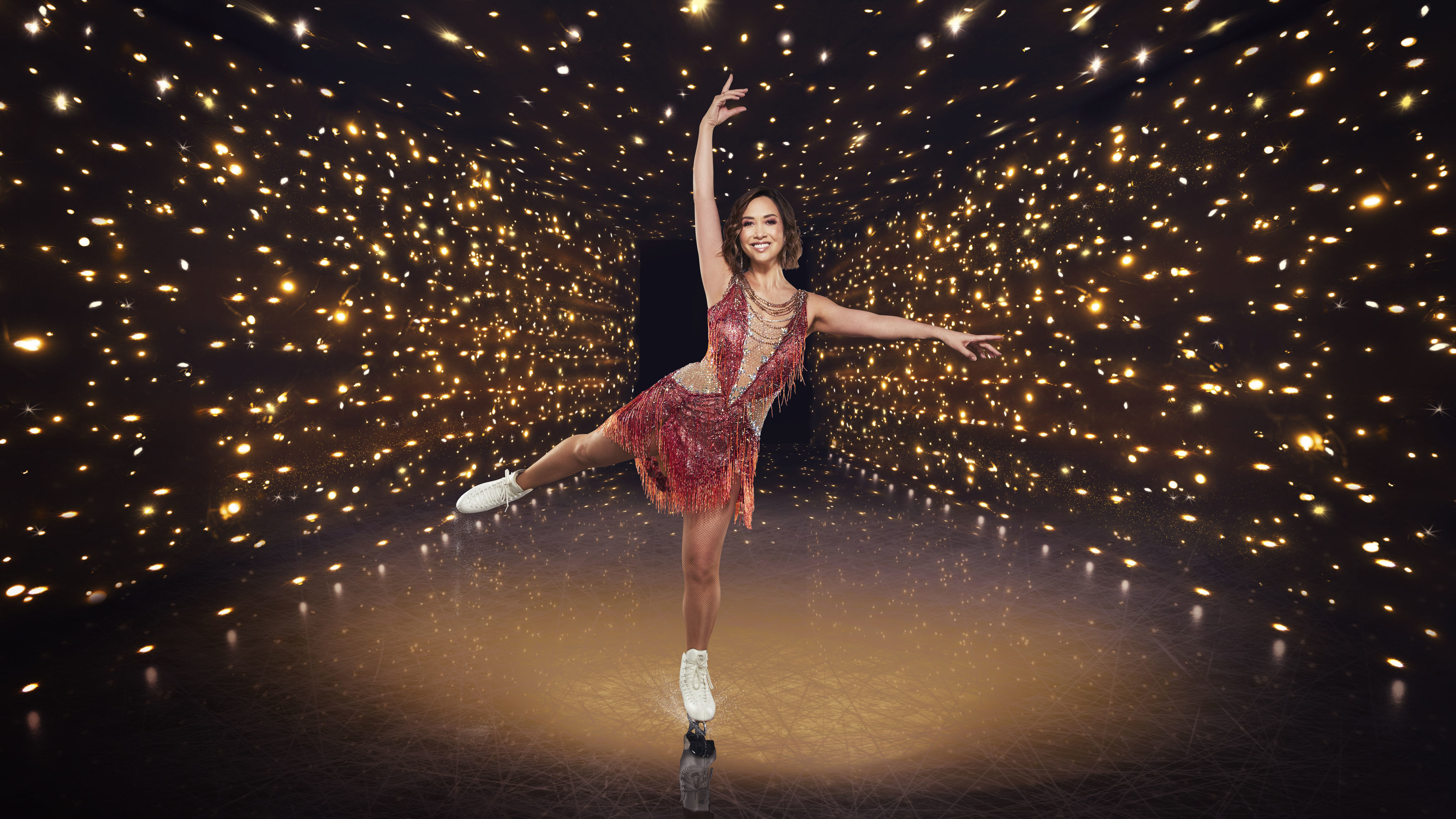 But despite her nerves, she admits she is game to try anything on the show — even the terrifying, and very dangerous, ‘headbanger’Credit: PA:Press Association

She only took part in the group dance during last week’s launch show while the first six celebs competed, but this weekend Myleene will go up against the other five famous faces.

And it comes as no surprise to Myleene that the two former elite sportsmen are the most competitive. She says with a laugh: “It’s ­obviously the Olympians. I’m just representing the mums — the mums that are stuck at home doing home-schooling. That is our power to keep going.

“And it is the kids that are beside themselves with excitement. They get excited about the ­costumes and want to know what everyone else is dancing to.

“I want to get out there now and give it a go. But it is Olympians I am competing against. “Never in a million years did I think I’d be in the same line-up as two Olympians — four with Torvill and Dean on the ice as well. Then it’s poor Myleene coming up behind. It’s like, ‘What am I doing?’” 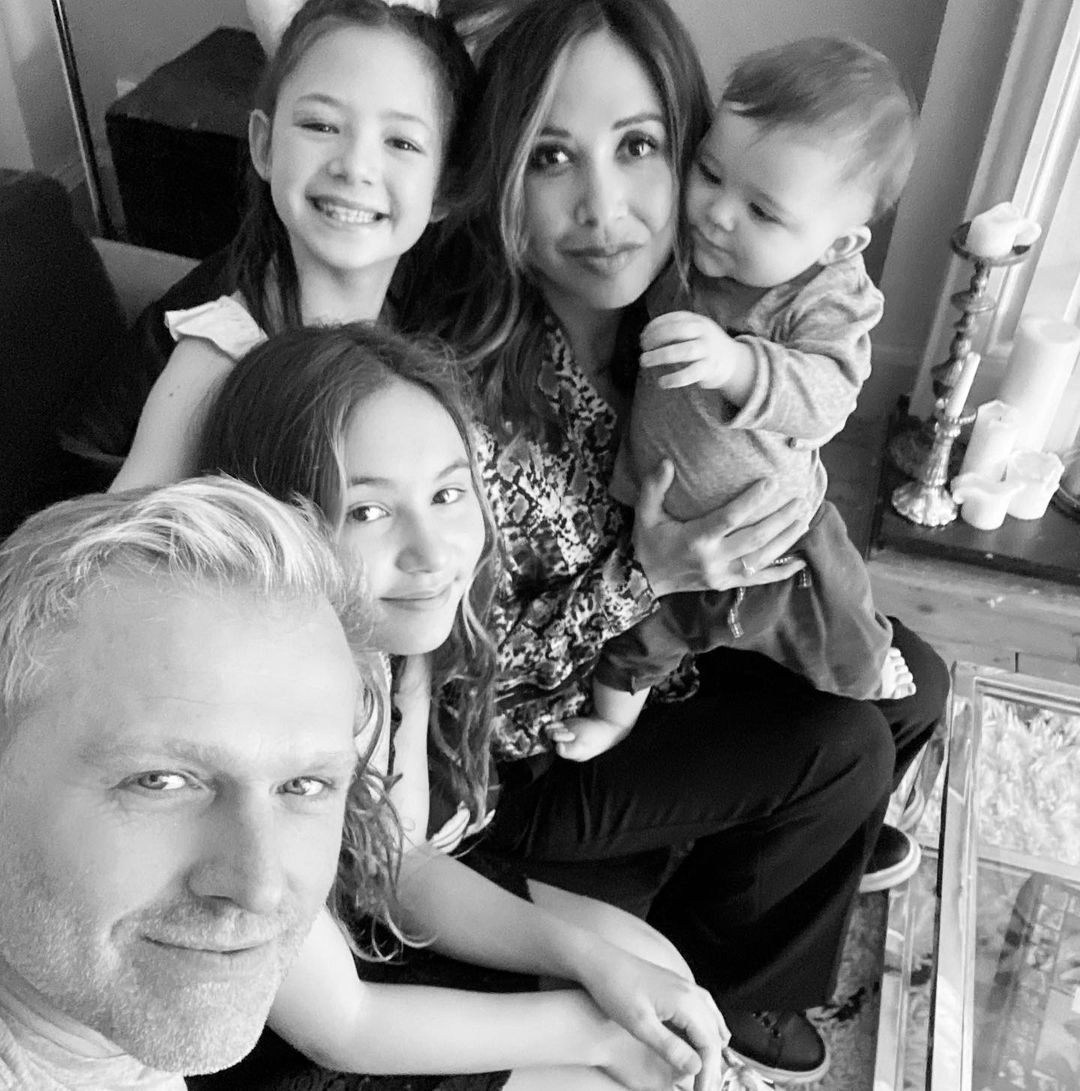 She has daughters Ava, 13, and Hero, nine, with her ex-husband, former bodyguard Graham Quinn, 46, and in August 2019 welcomed a son, Apollo, with her fiancé, PR expert Simon Motson, 46Credit: instagram/myleene klass

But despite her nerves, she admits she is game to try anything on the show — even the terrifying, and very dangerous, “headbanger”.

When quizzed on whether she would give the stunt a go, she jokes: “Ellie — I have already banged my head on the ice. I am in here in for a penny, in for a pound. Whatever Lukasz wants me to do, I will follow him blindly.

“But everybody just needs the pressure turned down a bit, and if that’s what Dancing On Ice does then I will take my one and a half minutes on the ice and make a total tt of myself, no problem.”