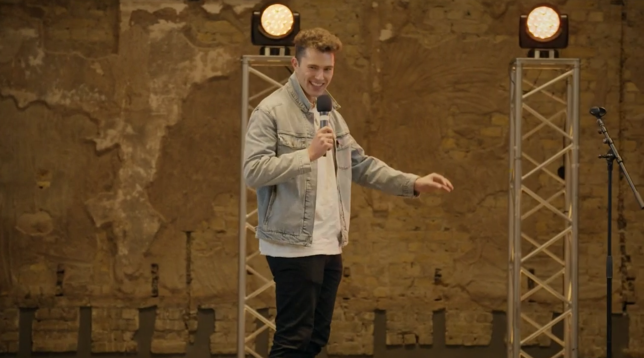 Curtis Pritchard left Stand Up And Deliver viewers ‘cringing’ over his stand-up routine.

The cast have been tasked with delivering a comedy routine in front of a packed out audience – with the winner getting the most laughs from the crows.

Comedians Jason Manford, David Baddiel, Nick Helm, Judi Love and Zoe Lyons were on hand to guide them through the process.

However, Jason covered his face when Curtis got on stage for his initial attempt at comedy.

Going up in front of his new co-stars, the 25-year-old was seen fiddling with his trouser zipper, before stating: ‘I came out of a restaurant, I’ve just been to the toilet, I’ve done exactly the same thing. 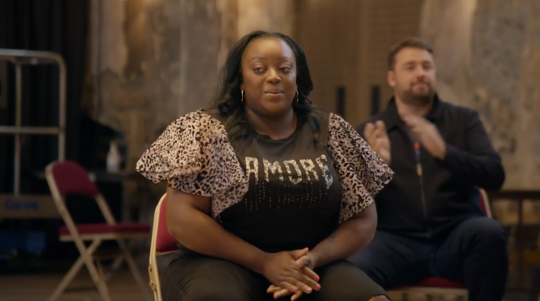 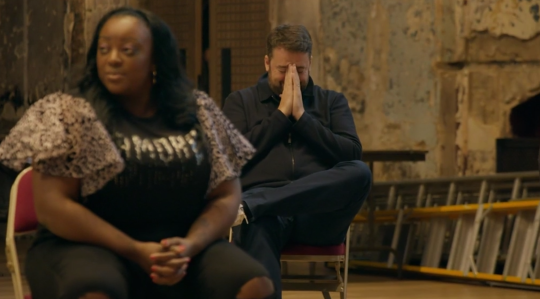 Jason Manford is all of us right now (Picture: Channel 4)

‘And all these women were looking at me right, they were giving me the eye. I was like, “Oh god damn. Mmm you look like KFC don’t you? Finger licking good. Mmmm.”

‘Then I realised that I was just flying low.’

Curtis’ first attempt at humour was met with silence from everyone, so he tried again, telling the stars: ‘I’ve got a joke for you…

And with that, mentor Judi looked baffled as Jason burrowed his head behind his hands.

Fans watching on from home were also left baffled by the whole thing, sharing their embarrassment at the scenes on Twitter.

Flocking to the social platform, a viewer penned: ‘I think we were all feeling embarrassed for Curtis…..it was cringe #StandUpAndDeliver.’

‘Curtis is so cringe. Shaun is hilarious and I’ve always liked the Rev. #standupanddeliver,’ another agreed.

A follower replied: ‘Curtis on #StandUpAndDeliver is killing me with the cringe.’

While one penned: ‘Oh my days. Curtis is painfully unfunny. #StandUpAndDeliver.’

The reality star was recently criticised when he revealed he would be making light of his Love Island stint in some of his routine – going so far as to compare his female co-stars to cars.

‘Love Island is in there, absolutely. There was lots of comedy elements in that,’ he told the Sun.

‘Comedy’s meant to be edgy, pushing the boundaries and at the end of the day, it’s meant to be just good fun and enjoyment for everyone that’s going to listen.

‘You’ve got all these different shapes and sizes in front of you, take it for a spin, take it for a test drive and if you don’t like it, you send it back.’

Stand Up and Deliver continues on Thursday, at 9pm, on Channel 4.