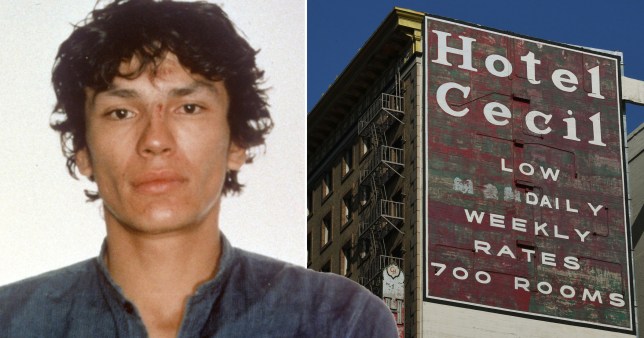 New Netflix documentary Crime Scene: The Vanishing At The Cecil Hotel, lifts the lid on the sordid guest house that allowed serial killer Richard Ramirez go undetected for so long.

The four-part series focuses on the history of the downtown Los Angeles hotel, which in the 80s was so depraved that Ramirez would live there without anyone batting an eye about what he was secretly doing.

Based on the edge of a deprived area of LA known as Skid Row, the Cecil Hotel’s sordid past spanned decades, with dozens dying while staying there either by suicide, murder or accidental overdose.

But among their most infamous lodgers was Ramirez, who would later become known as the Night Stalker, who raped, killed and tortured dozens of people around Los Angeles between 1984 and 1985.

In the new series, which has now launched on Netflix, former residents and historians of the area speak out about what happened at the Cecil, which was dubbed the ‘Suicide’ by locals for the number of deaths that occurred in its walls.

LA historian Kim Cooper explained: ‘It’s one of these hotels that’s well known for this type of crime. The Cecil is a place where serial killers would let their hair down. One was a figure who stayed upstairs on the 14th floor, was paying $14 a night for his room, he liked to scare, torture, torment, kill and rape human beings.’ 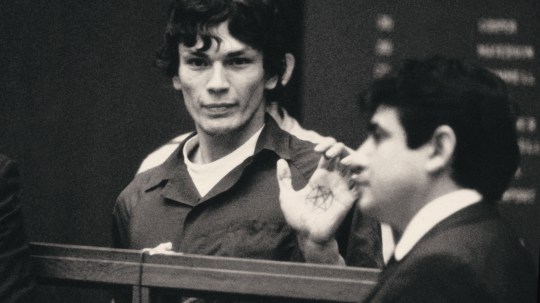 Ramirez was later convicted of more than a dozen murders (Picture: Netflix)

‘After committing some of the most brutal murders that happened in southern California ever, he would come back to the Cecil. In the middle of the night, he would be in the back alley covered in blood, taking off his clothing.’

‘He would walk in his blood-stained underwear, barefoot, up to his floor and into his room. Repeatedly,’ added Richard Schave, another local historian.

‘And that’s cool, and no one’s got a problem with that, because it’s that kind of heavy place,’ Cooper added.

‘The Richard Ramirez presence at the Cecil tells you a lot about the kind of place that it was.’

Kenneth Givens lived at the Cecil in the 80s (Picture: Netflix)

Kim Cooper is a historian of the area (Picture: Netflix)

Kenneth Givens, who was one of the residents of the hotel, described the building as ‘lawless’, and said: ‘Back in the 80s, I would never go further than the sixth floor. Usually, the higher floors of the Cecil, people used to get killed up in there.

‘Once they got a guy in the room, they would rob him, beat him up and threw him out the window. So if you didn’t watch yourself, you would come flying out of there with no wings.’

Ramirez’s time at the Hotel Cecil makes up only a small part of the four-episode series, with the disappearance of 21-year-old Elisa Lam in 2013 – 28 years after his residency – the central focus.

The final video of the young tourist behaving strangely in an elevator turned her disappearance into an internet sensation, with online detectives trying to figure out what happened to her.

Lam’s body was found in the water tank of the hotel on February 19, approximately 17 days after her death, and ever since there’s been speculation over whether she was murdered, or died by suicide.

Her death certificate states she died by accidental drowning.

Crime Scene: The Vanishing at the Cecil Hotel is available now on Netflix.