Stephen Fry has joined this week’s Countdown and viewers want him to become a permanent fixture.

The TV legend, 64, announced today that ‘after a 20 year gap,’ he will be ‘guesting’ on the show all this week.

Stephen has made a handful of appearances on the popular quiz show in the past and now he’s back, much to the delight of fans.

Taking to Twitter to share their joy after seeing him on their screens, fan begged the actor to ‘stay forever’ in Dictionary Corner with Susie Dent.

Stephen warmed viewers’ hearts, especially with his little celebrations after getting sums right during the numbers round.

Rachel Riley saw him punching the air out of the corner of her eye while explaining the answer, to which he explained that he ‘wasn’t very good’ with times tables at school.

‘I love it when I get them, I feel so proud because I don’t expect to,’ he said.

Sharing their love for him on social media, one Twitter user said it was ‘great’ to see the ‘wonderful’ Stephen on their screen.

Another even suggested he take over from Weakest Link host Anne Robinson as the show’s presenter, tweeting: ‘It was lovely to see you – I think you should be in Ms Robinson’s seat, though!’

‘My week is complete,’ tweeted another happy fan.

One wrote: ‘Awesome. Watch Countdown regularly with mother. Looking forward to it.’

‘Could have been great to see you on 8 out of 10 cats does countdown,’ replied another.

Stephen has become a national treasure after rising to prominence in the 1980s as one half of the comic double act Fry and Laurie, alongside Hugh Laurie, with the two starring in A Bit of Fry & Laurie and Jeeves and Wooster.

Most recently, the former QI presenter spoke about homophobic abuse he received while at the FA Cup at Wembley, saying it left him ‘trembling.’

And youâre doing a instant job of reminding us why youâre an absolute bloody national treasure. Please stay forever

Speaking on the Out To Lunch with Jay Rayner podcast, he recalled: ‘I remember once going to the FA Cup in Wembley and, as I was walking in, there was this furious face suddenly loomed right in front of me.

Stephen – who married his husband Elliot Spencer, 34, in 2015 – admitted he thought the person wasn’t being serious, responding to the threat with: ‘That’s right, dear.’ 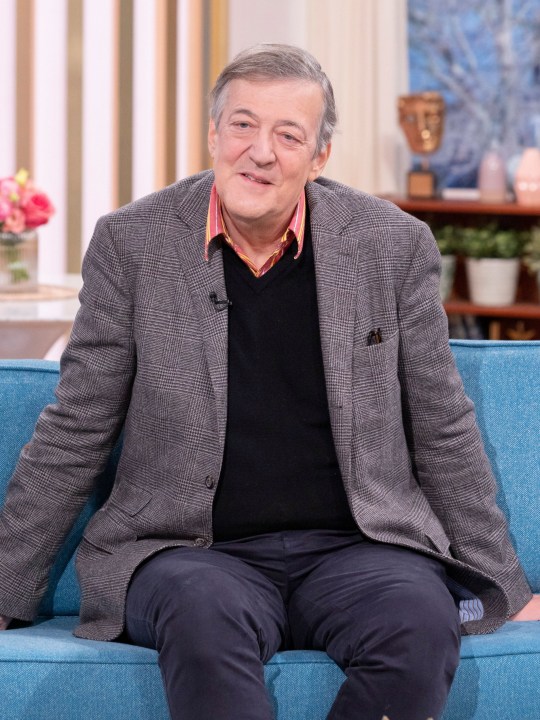 Stephen rose to fame in the 1980s and has become a national treasure (Picture: Ken McKay/ITV/REX/Shutterstock)

‘He went crazy and he was coming towards me and his friend started to pull him back, and then other people said “go away, go away, go”,’ he added.

Stephen said the person’s ‘eyes were genuinely filled with hate,’ admitting the guy ‘would have quite happily nutted me and stamped on my head,’ which left him in a state of ‘shock.’

He said that the attack was distressing and it left him ‘trembling for hours afterwards.’

‘It was innocent and pathetic of me because lots of people live in that fear of physical violence much closer to them all their lives. It’s so rare for me that it really was a shock,’ he shared.

Stephen is currently starring as biochemist Ian Gibbons in The Dropout on Disney Plus, and will soon appear in Neil Gaiman’s The Sandman on Netflix.