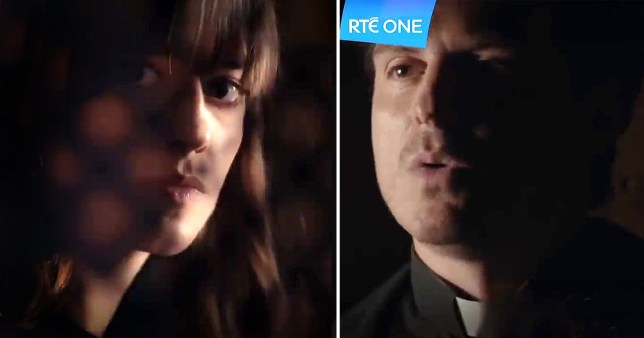 Comic Relief had an extra treat in store for viewers after they were treated to a crossover of Fleabag and Normal People.

The three-hour fundraiser featured the clip, which was originally filmed for Irish Comic Relief on RTE in the summer, and fans got to see Fleabag’s Hot Priest sing with Connell and Marianne from Normal People.

The clip began with Connell (Paul Mescal) in a confession booth telling Andrew Scott’s Hot Priest that he had sinned, before the priest starts confessing about his own relationship with Fleabag right back.

As Connell sits there in confusion, a female voice can be heard from the other side of the confession booth, which proves to be Marianne coming in to confess she had stolen Connell’s iconic silver chain.

After the three of them talk over each other about their feelings, the trio burst into a spirited rendition of Baby Can I Hold You, originally by Tracy Chapman but popularised by Boyzone.

Viewers were over the moon to see the crossover – especially those who hadn’t seen it when it first aired in the summer – and took to Twitter to share their excitement.

#NormalPeople and #Fleabag Comic Relief mash-up was just perfect. Not only terrific actors and sexy people, but they can sing too!

They wrote: ‘I’m sorry, did the Fleabag/Normal People crossover for Comic Relief just break my heart?’

Others added: ‘#NormalPeople and #Fleabag Comic Relief mash-up was just perfect. Not only terrific actors and sexy people, but they can sing too!’ and ‘Hello I thought this was COMIC relief not make me cry about hot priest and fleabag time excuse me’.

While Comic Relief was slightly different to previous years, viewers were still treated to epic sketches and special performances, including Justin Bieber’s first performance on UK television in five years.

Who is Elizabeth Warren’s husband?