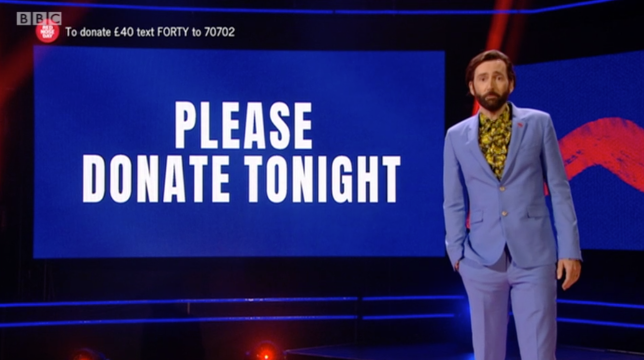 David Tennant was visibly emotional while hosting Comic Relief 2021, as he struggled to regain his composure.

The Doctor Who actor joined Alesha Dixon and Sir Lenny Henry to present the fundraiser on BBC on Friday.

But things became too much for the 49-year-old following a cover of Sunshine On Leith – performed by The Proclaimers and four choirs.

A montage was played out of clips from the last 12 months, mixed in with footage of the iconic group on stage – and Zoom calls of the choirs.

After the performance, the camera panned back to David in the studio, who was visibly emotional by the footage.

Clearing his throat, he said: ‘What can you say? Thank you to the Proclaimers and the four brilliant choirs in that film. 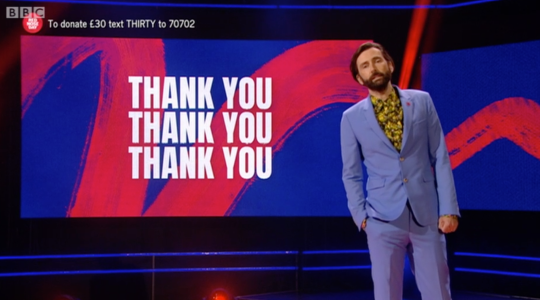 ‘I mean, none of us would’ve seen this year coming. 12 months ago, all the suffering and all the sacrifice. But then, all the kindness and all the love.

‘We can continue that tonight. If you’ve been sitting there all night thinking, “maybe I’ll donate something, maybe I’ll pick up my phone, maybe I’ll see what happens next”. Now is the time.

‘Let’s do it right now. Just pick up your phone, you can ring the number on the screen. Please, it will help so much.

‘We can get it to the people doing the most life-changing work.’

Seeing David Tennant welling up after listening to Sunshine On Leith by @theproclaimers promoted me to pick up my phone, send a text and donate to @rednoseday2021 – what a moving video: really brought home how this pandemic has affected all our lives

Choking up, he added: ‘There has never been a more crucial year for the projects that Comic Relief supports.

‘That makes this a very important night indeed.’

Viewers were left in tears over the scenes, and discussed the performance – and David’s reaction – on Twitter.

‘David Tennant and thousands of us choking up to that rendition of Sunshine on Leith #RedNoseDay,’ one penned.

‘The Sunshine on Leith montage was bad enough, but hearing and seeing David Tennant getting choked up and emotional after it has finished me off!! #davidTennant #RedNoseDay #ComicRelief2021 #proclaimers,’ another agreed.

As a follower added: ‘#RedNoseDay bless you #Davidtennant could hear in your voice how touched you were talking x.’

Comic Relief is available to watch on BBC iPlayer.

What is the AAPI community?