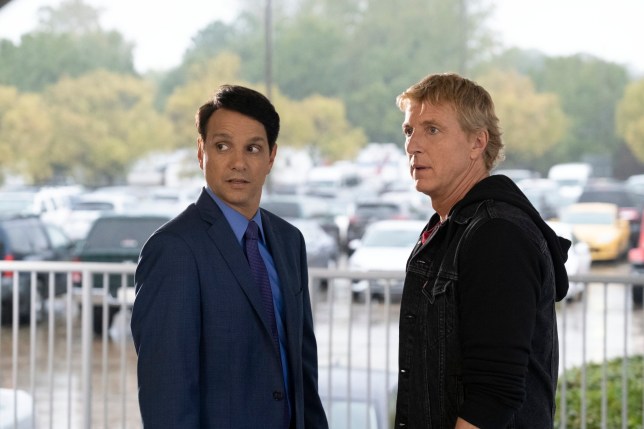 Ralph Macchio and Johnny Lawrence are on the way back for season four (Picture: Netflix)

Season four of Netflix show Cobra Kai has officially started filming, with new members of the cast announced for the Karate Kid spin-off.

On New Year’s Day, the third season of Cobra Kai was released on the streaming platform, with William Zabka returning as Johnny Lawrence and Daniel LaRusso reprising his role as Ralph Macchio.

Less than two months later, the next instalment is already in the works, with Netflix confirming the news on social media.

In a tweet posted by Netflix’s @NXOnNetflix account, it stated: ‘You ready? Let’s begin! Season 4 of Cobra Kai is officially underway!’

The tweet showed a picture of the front cover of the script for season four’s first episode, which is titled ‘Let’s begin’, which has been written by Josh Heald, Jon Hurwitz and Hayden Schlossberg.

In a second tweet, Netflix revealed a couple new additions to the cast, including two stars who are becoming series regulars after previously being recurring characters.

‘A little more news – @veryvness [Vanessa Rubio] and @peytonlist [Peyton List] will be returning as series regulars, and we have some news faces joining us this season, Dallas Dupree Young and Oona O’Brien!’ the tweet read.

Dallas, who previously starred in The Good Place and Ready Player One, will play a character called Kenny, while Oona will depict newcomer Devon.

Cobra Kai is set 34 years after the events of The Karate Kid, which was released in 1984.

In its latest season, the martial arts comedy-drama pays homage to a classic moment from sitcom Friends, when Ross claims to know all about ‘unagi’, which he says is a state of ‘total awareness’.

However, despite feeling extremely passionate about the subject, he is corrected that unagi is a freshwater eel.

In a season three episode of Cobra Kai, Johnny and Miguel are eating sushi together when they point out that they’re eating unagi.

Several Cobra Kai fans admitted that their minds immediately went to the Friends episode, with one stating: ‘Be honest y’all thought of Ross when you watched this bit didn’t you.’

Cobra Kai is available to watch on Netflix.