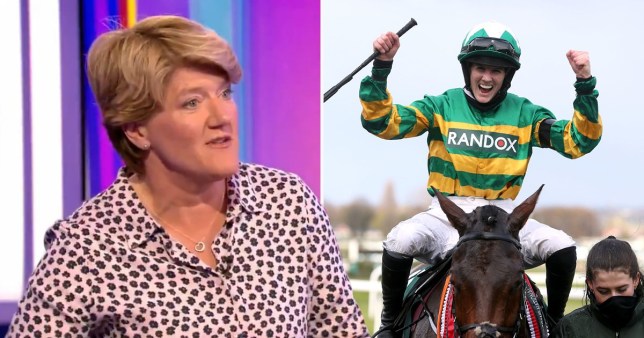 On Saturday April 10, Rachael became the first female jockey to win the Grand National when she rode Minella Times to victory.

Speaking to ITV Racing after the race, the Irish jockey said: ‘I cannot believe it. He was a sensational spin. I’m so lucky to be riding. It is unbelievable.’

On Tuesday evening’s edition of The One Show, broadcaster Clare commended Rachael on her historic win, telling presenters Alex Jones and Rylan Clark-Neal: ‘It’s a game-changer. She really has raised the bar.’

Clare, who is the daughter of retired horse trainer Ian Balding and sister to racehorse trainer Andrew Balding, explained that Rachael was ‘getting the consistency of chances on good horses in big races’, which is ‘what’s changed the conversation’.

The author added that ‘back in the old days’, there were many ‘old trainers’ who wouldn’t have thought a woman could achieve such a feat.

However, as she explained, female jockeys could find themselves at an advantage if they are ‘naturally a stone lighter than the men’, as they can ‘build up muscle without it being a negative’.

‘To have female jockeys riding in the best races on horses that are 11-1 instead of 100-1, that makes a difference. And when the really, really good ones can do it, it gives a whole load of people permission to follow that as a career,’ she said.

‘Because not everyone’s going to be outstanding, there are jobs there and a career there for lots of people. I think it would be fantastic if it was more equally balanced.’

Clare also speculated that in 10 years time ‘there’ll be at least 10 female jockeys’ at The Grand National, after three women competed this year.

‘It is incredible that jockeys like Rachael can go out every day of the week and get the same pay as the men,’ he said.