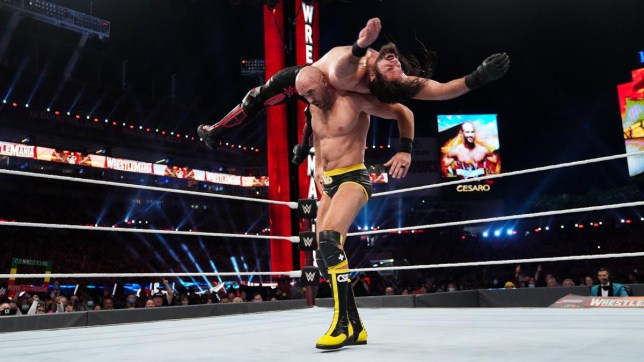 WWE superstar Cesaro blew fans away at WrestleMania 37 as he showed off his strength with an impressive UFO.

The incredible moment saw the Swiss Superman spinning around in the middle of the ring hands-free, with Seth Rollins draped over his shoulders as the crowd roared their approval.

On SmackDown last week, the clip was shown plenty of times throughout the night but when it came to Cesaro’s match against Jey Uso in the main event, he didn’t treat fans to another peak at an Unidentified Flying Opponent.

He exclusively told Metro.co.uk: ‘I mean, I’ve waited nine years to do it. [laughs] I’m not going to do it again and again and again! It’s called UFO for a reason – you don’t see those every day, right?! It has to be special!’

Although the former United States Champion has many strings to his bow, he was still delighted to see that move resonate so well with the crowd in Tampa and around the world.

He said: ‘For me, it was really cool. That was one of those – “I’ll do it, I hope the fans will remember it and still like it”. And they did. It’s very humbling and cool to see, so it made me proud.’

For many watching, the match with Rollins – Cesaro’s first ever singles contest at WrestleMania over an almost decade-long WWE career – was validation years after boss Vince McMahon openly questioned the superstar’s ability to connect with an audience.

Seemingly out of nowhere, the talent and experienced wrestler finally seemed to have the backing of everyone behind the scenes as he found himself thrust into a coveted featured feud at the Show of Shows.

‘To me, it was just my body of work,’ Cesaro said, pondering the reasons for this year being his time to shine. ‘This is how I approach it, right?

‘People say something negative about other people, they come out, they defend themselves. But to me, you have to let your actions do your talking. 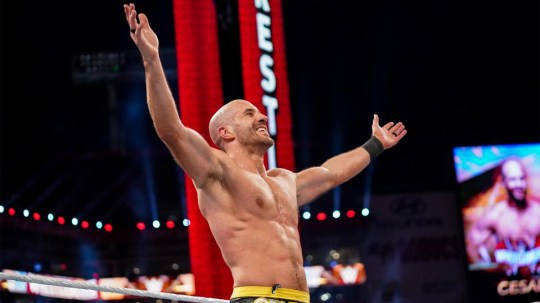 Cesaro did just that over the past decade, and after fans clamoured for this moment for a long time, he hopes his journey can be a source of inspiration.

‘Success doesn’t happen overnight, it takes a lot of work and if I can stand for that and inspire people to follow their dreams no matter what – it may take a while, but you can get there. I would love to be that,’ he smiled.

Now, the star – who seems to be primed for a Universal Title feud with dominating champ Roman Reigns – is back on the grind, focusing on bettering himself and making the most of every opportunity, including the fresh challenge of delivering on the microphone in a main event programme.

‘For me, I learn every day – and here’s the other thing too, I fail every day as well. Everything I do I’m like, “Oh man, I could’ve done that better,” but I did it to the best of my ability,’ he said.

‘I never do something and go, “Oh I’ll do this half-heartedly”. No, I do it to the best I can and then I try to improve on it.

‘Any new chance I get, to do those promo segments or be put in different spots or show a different side – I truly enjoy and try to make the best of it. And then I learn and I’ll try to get better, and I think that’s very important. Don’t be afraid to fail.’

Back to WrestleMania though, and the driven superstar was determined to enjoy every moment in the spotlight after seeing that hard work pay off.

He beamed again: ‘I was like, just enjoy this, because you’ve worked very long, very hard – and you’ll start working again tomorrow, so enjoy this and have a good day.

‘I did just try to have a really good day and have fun in my match, and I hope it showed!’