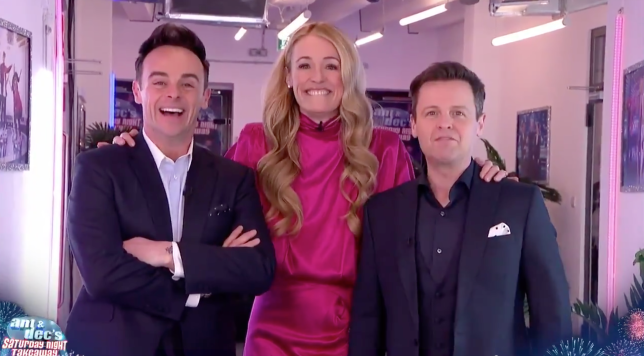 Cat Deeley has been in a bubble with Ant and Dec (Picture: ITV)

Cat Deeley and Ant and Dec were able to stand close to each other and hug due to being in the same cohort together ahead of Saturday Night Takeaway.

Viewers were quick to spot the three share a hug at the start of the show and question why they were not social distancing.

They tweeted: ‘Why did Cat kiss Ant and Dec? What is going on?’ and ‘Surely Cat shouldn’t of kissed @antanddec?! Social distancing?!’ (sic)

Others added: ‘Whoa they kissed Cat?! Hang on one Covid socially distant second!!’ and ‘On every other show the last few weeks : oh we can’t hug you sorry This week : yeah let’s hug Cat’.

While seeing people hug is definitely strange after a year in lockdown due to the coronavirus pandemic, the three pals were able to get closer than two metres to each other due to being in the same bubble.

An ITV spokesperson confirmed to Metro.co.uk that Cat had joined Ant and Dec’s cohort to be able to film this week’s episode of Saturday Night Takeaway, including a special Chums sketch.

Cat had been a special guest on the show to mark 20 years since the end of SM:TV Live which the three of them had hosted until 2001, and her appearance on SNT was giving viewers serious nostalgia.

Many commented about how old it made them feel to know the much-loved children’s TV programme had ended two decades ago, as they reminisced on Wonky Donkey and Chums.

Ant, Dec and Cat also enlisted a host of celebrity friends including Sting, Simon Pegg, Emily Atack and Steps, to catch up on Cat and Dec’s marriage 20 years on.

However, given that Chums never did go smoothly, the pair discovered that Any had never registered their marriage officially, so the pair had to go through the whole ceremony again – and fans will have to wait another two decades to find out how it ended.