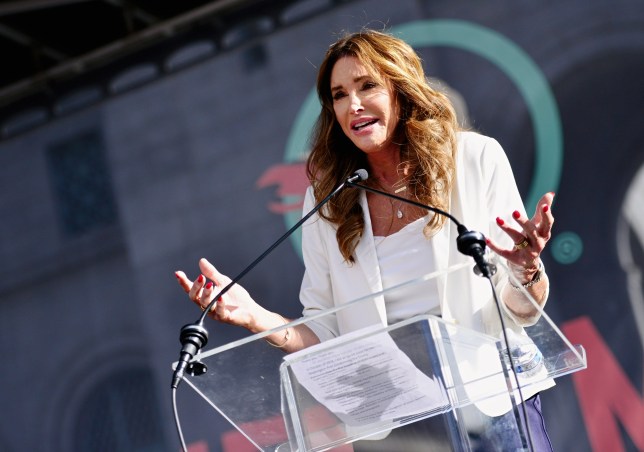 Caitlyn Jenner revealed her pro border patrol stance in a new interview as she continues her campaign to become governor of California (Picture: Chelsea Guglielmino/Getty Images)

Two weeks after beginning her run for governor of California, Caitlyn Jenner has made waves with her first TV interview about the election race.

The 71-year-old reality star spoke openly to Fox’s Sean Hannity on Wednesday in a chat that confirmed her pro border patrol and pro ICE (Immigration and Customs Enforcement) stance.

The former gold medal-winning Olympic athlete – who came out as a transgender woman in April 2015 – claimed she is not a Republican but showed support for former President Donald Trump’s border wall and deporting undocumented immigrants.

Jenner, who has never held political office, surprised the world when she announced on April 23 that she plans to take on Democrat Gavin Newsom.

When asked if she would continue building the border wall should she take office, Jenner replied: ‘I am all for the wall. I would secure the wall. We can’t have a state, we can’t have a country without a secure wall.’

The reality star has never held political office before announcing her run in April (Picture: Caitlyn for California)

‘I am for securing this state. I am pro-law enforcement. I am pro-border protection, OK? ICE, pro-ICE We need these people, and they do a wonderful job.’

Despite saying she planned deport undocumented immigrants, Jenner revealed that she is trying to help a longtime acquaintance who is in the country illegally.

The former Keeping Up With The Kardashian star – who described herself as ‘a thoughtful disrupter’ – argued that the man has been trying to gain legal status for 17 years and claimed it was time to modernize the immigration system.

The sporting star also spoke about being seen as a role model as she stated: ‘For me as a transwoman, I think role models are extremely important for young people. Trans issues, people struggle with big time, our suicide rate is nine times higher than the general public.

‘And for me to be a role model, for them, to be out there. ‘I am running for governor of the state of California, who would ever thunk that? We’ve never even had a woman governor.’

When confronted with the fact that many are mad about her recent comments about transgirls competing in female sports, Jenner replied: ‘I move on, I want to be a role model. I think to be a leader, and I think the most important thing as a leader that you can do is your compassion [and] your honesty.’