Bridgerton star Adjoa Andoh revealed she was moved by the number of young Black girls sending her pictures of themselves dressed as her notable character Lady Danbury.

The 59-year-old actress starred as Simon Basset’s (Regé-Jean Page) mentor in season one of the Netflix drama, which took the world by storm following its debut on Christmas Day 2020.

Critics and fans have praised the show’s diverse cast, and Adjoa was overwhelmed by the programme’s impact on young boys and girls.

Speaking to the Mirror, she said: ‘I can’t tell you how touched I have been to see the little Black girls posting photos of themselves in a Regency dress, dressed up like princesses.’

‘You kind of go, “oh these children are going to grow up feeling like they have a place” – not like they are being tolerated,’ she added.

In the highly-anticipated second series, Lady Danbury welcomes the Sharma family – sisters Kate (Simone Ashley) and Edwina (Charithra Chandran), along with their mother Lady Mary (Shelley Conn) – who travel to London from India to take part in the social festivities. 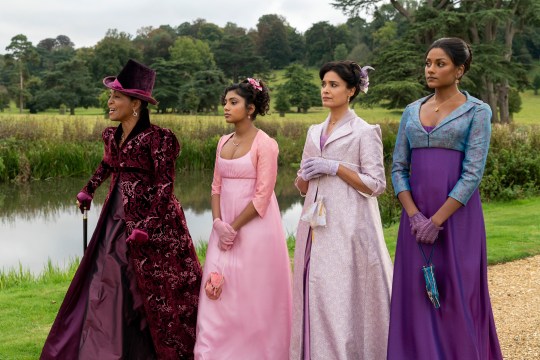 Adjoa (left) revealed she gets so many pictures of young Black girls dressing up as Lady Danbury (Picture: Netflix)

However, things take a turn for the scandalous as both siblings have their eye on the dashing Lord Anthony Bridgerton (Jonathan Bailey).

Charithra (Edwina) recently shared that in her experience ‘minorities are often alluded to as being there to tick boxes, to fill a quota’.

‘I cannot tell you how unbelievably invalidating that is,’ she told Radio Times.

‘It penetrates our minds and makes us feel like we’re not worthy of success.’

She added: ‘I had people at university tell me, “You only got the lead in that show because they needed to have a person of colour in it.” It makes you doubt everything.’

While Regé is unfortunately not reprising his role in the series, Phoebe Dynevor (Daphne Bridgerton) will be back to join the rest of the clan as the focus shifts to Anthony’s love life.

Season one of Bridgerton is available to stream on Netflix, and season two premieres on March 25.