Britain’s Got Talent judge Amanda Holden ran away screaming after the spooky Witches brought out a live rat on the panel.

In Monday’s semi-final, the mysterious performer – whose identity is yet to be revealed – upped the ante tonight and asked the judges to state what frightens them the most.

‘I have the power to conjure your deepest, darkest fear,’ they began.

The act asked judges Simon Cowell, David Walliams, Alesha Dixon and Amanda to ‘reach into the box and take what’s inside’.

Amanda, who was visibly scared at this point, reluctantly agreed and pulled out a piece of paper which had the word ‘rodents’ written in bold.

It didn’t take long before Alesha and Amanda figured out what was going to happen next, as Amanda yelled: ‘Is there a rat in there?’

Once the lid was lifted, a rat was seen on the panel and that was enough for Amanda and Alesha to run from their seats.

When it came to delivering their feedback, only David and Simon were able to comment as Alesha and Amanda stayed away.

When hosts Ant and Dec asked Amanda how she was feeling, she replied: ‘It was the most terrifying thing that’s happened to me in 16 years.’ 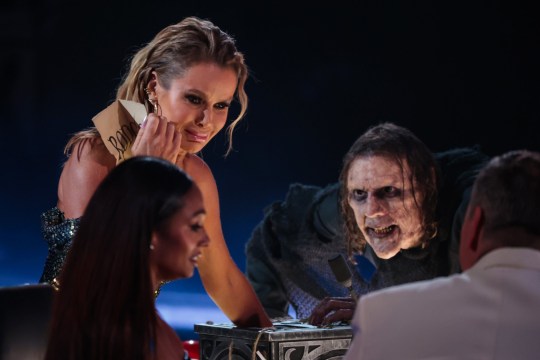 Safe to say Amanda might be having nightmares tonight (Picture: REX) 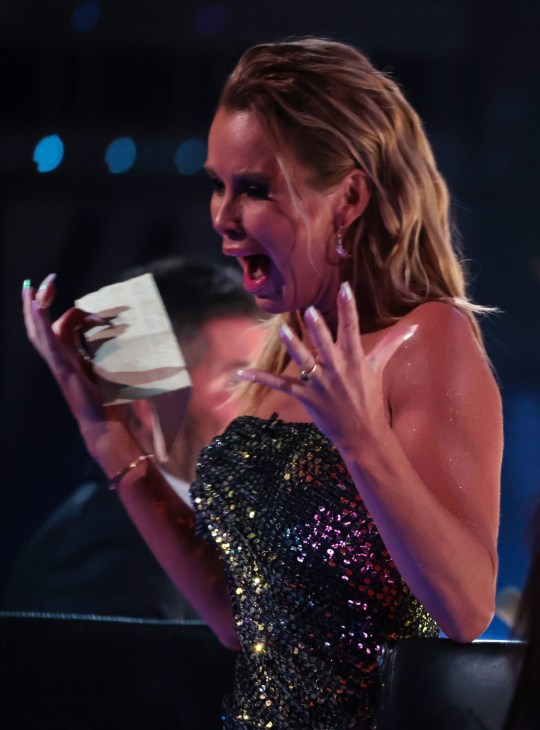 However will she recover from the fright? (Picture: Rex Features)

Although The Witches intended to scare, viewers couldn’t help but see the funny side of their act.

‘Crying laughing at Amanda with the rat #BGT,’ one person tweeted.

‘I would actually watch hours of The Witch chasing Amanda with that rat!’ another added.

Elsewhere during tonight’s action-packed show, David’s Golden Buzzer act delivered an energetic performance, however, the funnyman jokingly threatened to quit the show if fans don’t vote for them.

Singer Mel Day kickstarted the live show with a medley of soul classics, while comedian Suzi Wild had the judges in stitches with her spot-on impressions.

Sheffield busker Maxwell Thorpe earned another standing ovation from the judges as he closed the show.