Clive Myrie has been flooded with support from BBC viewers after sharing photos alongside Lyse Doucet from two different war zones, over two decades apart.

The BBC News journalist has been reporting on-camera in Ukraine alongside Doucet, who is the broadcaster’s chief international correspondent.

They’ve been bravely keeping viewers up to date with the ongoing Russian invasion as those watching at home remain concerned for their safety.

Myrie received support on Twitter after members of the BBC News at 10 audience thought they saw him shed a tear while presenting on the Ukraine crisis from its capital.

But the presenter has also been sharing more positive moments with those who are worried about him and his BBC colleagues in Ukraine, as they try to keep their spirits up.

In the early hours of Saturday, Myrie posted a couple of photos on his Twitter page next to Doucet – one from Kabul in 2001 and one from this week in Ukraine. 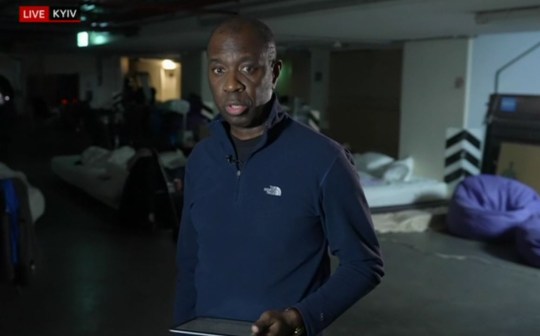 Clive has been reporting from Ukraine since the end of February (Picture: BBC)

‘I’m proud [to] know you young lady ⁦@bbclysedoucet,’ he added.

Doucet has also made sure to highlight those working behind the cameras in the warzone.

On Thursday night, she shared a photo of some of her colleagues in the Ukrainian capital as she praised them for making ‘all the difference’ and drew attention to the importance of their roles. 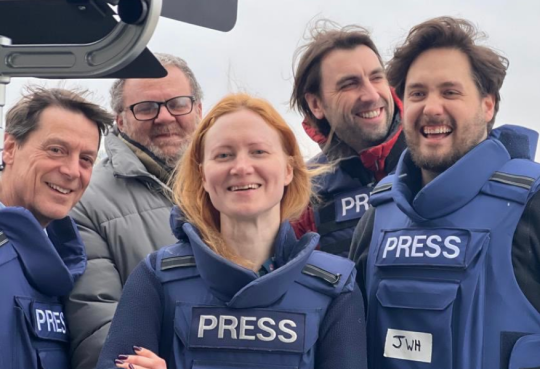 Lyse praised the team as she offered a rare glimpse behind the camera (Picture: Twitter/bbclysedoucet)

Fans soon responded to Myrie’s post, with one sharing: ‘All doing an excellent job reporting on Ukraine – thank you.’

‘Please keep going. Please keep telling the world what is happening in Ukraine. And please keep safe,’ another wrote.

Someone else added: ‘You two are doing incredible work: frank, fearless journalism in the most challenging of conditions. You are a credit to the BBC. Stay safe.’

‘You are both doing brilliantly amidst what must be ever-challenging broadcasts. We really do appreciate you both, the crew, runners, camera people and everyone involved getting this truth out to the world. The truth will prevail,’ commented a viewer.

Myrie took time for another light-hearted moment last weekend as he spotted himself on Mastermind while taking shelter in Kyiv amid the Russian invasion.

Much to the delight of fans, he tweeted alongside a photo: ‘I’m in Kyiv, Russian troops have encircled the city and are advancing, and guess what’s in the telly!! @MastermindQuiz #kyiv.’

Inside Prince Charles’ Plans to ‘Slim Down’ the Royal Family