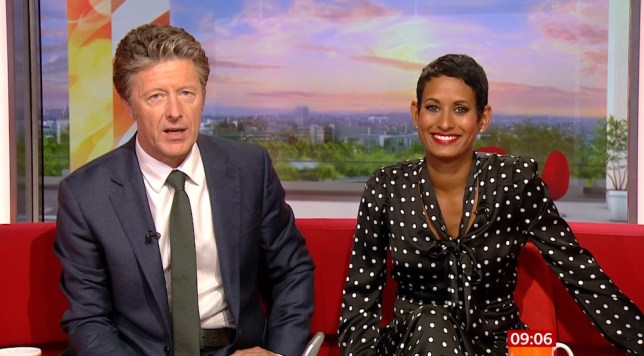 The BBC has said that Naga Munchetty and Charlie Stayt have been ‘reminded of their responsibilities’ following a joke about a flag visible during an interview with Housing Secretary Robert Jenrick on BBC Breakfast.

Charlie poked fun at the MP’s flag as being ‘not up to standard size government interview measurements’ last week.

‘I think it’s just a little small, but that’s your department, really,’ Charlie added as the interview came to an end. Robert did not respond.

Naga was left in stitches, but later apologised for liking tweets that were ‘offensive in nature’ after the interview.

The broadcaster has now said it had received complaints from viewers ‘unhappy’ about the initial comments and later activity of social media.

A statement from the BBC on the complaints section of its website said: ‘At the end of a long, serious interview with the Housing, Communities and Local Government Secretary Robert Jenrick, Charlie Stayt made an off the cuff remark about the size of the flag behind Mr Jenrick.

‘It was meant as a light-hearted, off the cuff comment and no offence or disrespect was intended. Naga and Charlie have been spoken to and reminded of their responsibilities, including the BBC’s impartiality and social media guidelines.’

Apologising on Twitter, Naga previously said: ‘I “liked” tweets today that were offensive in nature about the use of the British flag as a backdrop in a government interview this morning.

‘I have since removed these ‘likes’. This does not represent the views of me or the BBC. I apologise for any offence taken. Naga.’

Huw Edwards also had to delete a tweet after he mocked the BBC Breakfast Union Flag row by joking that he’ll be presenting BBC News in front of a massive Welsh flag.

BBC Breakfast airs on weekdays at 6am on BBC One.