The BBC has responded to more than 100 viewers who complained over what they felt were ‘over-sexualised performances’ during their Big New Year’s Eve Party on December 31.

The broadcaster ended 2021 in style, with a celebratory concert involving Years & Years, Kylie Minogue and The Pet Shop Boys put on to see out the year.

The spectacle sandwiched the New Year with fun both before and after the midnight gong, with the proceedings being led by Years and Years singer Olly Alexander.

However, some of those tuning in expressed concerns over the coverage, with 179 complaints received by the BBC.

The complaints were ‘from viewers unhappy with some of the content in the broadcast as live concert.’

The BBC has since responded to those who got in touch, saying: ‘The event and the staging of this late-night show is intended to be a celebration for all. 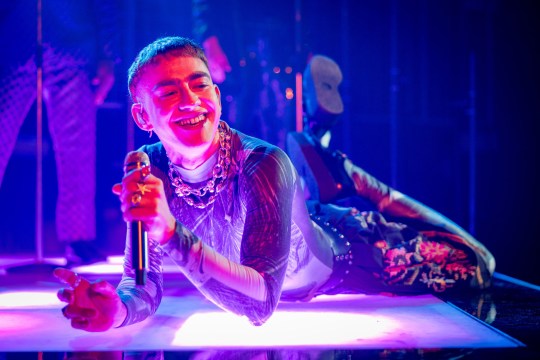 ‘We hope that for the majority of viewers watching, the tone of the overall concert remained within general audience expectations.’

The programme – which was pre-recorded – didn’t kick off until 11.25pm, so well past the watershed time of 9pm.

It paused for 10 minutes at midnight, in order for people at home to chime in the New Year with the help of Big Ben, before resuming for more party hits.

It’s A Sin star Olly is currently promoting his new album Night Call, which is set to be released on January 21.

At the time, he told fans ahead of the show: ’You can expect not-at-all camp performances of old songs, new songs from my upcoming album Night Call, multiple scandalous outfits, choreography and many more surprises!!

Most viewers were delighted to see the hitmaker joined by Kylie and The Pet Shop Boys where they all performed some of their most iconic tracks, and channelled the magic of 80s music for an evening.

Elsewhere, Olly told fans he was suffering from Covid earlier this month, which saw him have to pull out a recent performance on The Graham Norton Show.

Luckily, he has since recovered and in a post on Tuesday, expressed his excitement over his upcoming record.

He shared on Instagram: I’m Covid free! yayyyyy! I got out of isolation and it felt good 🙂 this is actually a selfie from my room but oh well.

‘My album Night Call comes out next Friday! it’s the third album from Years & Years but the first as my solo project, it’s literally taken years but it’s finally coming out !’

The Big New Year’s Eve Party can be streamed in full on BBC iPlayer now.

Mum horrified to find KNIFE inside toy doll box she bought for daughter, 2, from Aldi