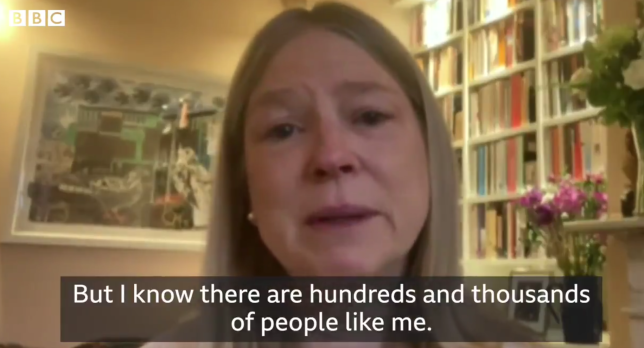 Cathy Killick opened up in the emotional report (Picture: BBC)

BBC presenter Cathy Killick broke down in tears while sharing her experience of losing both of her parents to coronavirus in the space of six weeks.

Cathy, who reports for BBC Look North, shared her story on air, with viewers left heartbroken at the tragedy.

‘The music you’re hearing is something my brother found to play to our mother when she was dying,’ she began. ‘It happened six weeks after the death of my dad. They both died from Covid-19.

‘Their names were Ted and Elizabeth. Dad was in the army, a gunner, and my mum was a primary school teacher. They were such lovely parents. They took us camping and helped us out whenever they could. There were four of in all, I’m the third.

‘I’m doing this in their memory. And also because I know as a reporter, it’s really hard to give a voice to the bereaved. It’s easy to find people affected financially by the lockdown. But I know there are hundreds and thousands of people like me.’

Cathy explained that her father had dementia and died in his care home after months of limited visits, and praised the carers and health workers who she says ‘risked their own health to take care of him.’

Our reporter Cathy Killick lost both her parents within six weeks to Covid-19.

We recognise this story is one of many, but as the number of people in Yorkshire who’ve died with the virus reaches 10,000, Cathy wanted to share this with you.

‘I won’t have a word said against them, they were unflagging and dedicated,’ she continued.

Her mother tested positive for coronavirus in hospital after having a stroke.

Cathy looked after her mum from home, with ‘fantastic help’ from the district nursing team, who she says she is ‘so grateful’ to.

‘I want to say that when we talk about protecting the NHS, it’s not an institution or a building, it’s people – it’s those young girls,’ she said.

She praised the carers who looked after her parents (Picture: BBC)

‘This virus exploits us. It exploits our selfishness and it exploits the love we feel for people and how we want to be with them and I can’t wait for it to be over, but that’s only going to happen with kindness and support for the people around us, because that truly is the best of us. The best of what makes us human.’

After the video was shared on Twitter, Cathy wrote: ‘I have been overwhelmed with love and support from Twitter users – that’s not a sentence I ever thought I’d write – but it’s true.

I have been overwhelmed with love and support from Twitter users – thatâs not a sentence I ever thought Iâd write – but itâs true. Thank you everyone for your kindness, empathy and humanity. Itâs what will get us all through this. https://t.co/SJLVCXzHcw

‘Thank you everyone for your kindness, empathy and humanity. It’s what will get us all through this.’

Cathy’s story was shared as the number of people who have died of coronavirus in Yorkshire reaches 10,000.

The coronavirus vaccine is currently being rolled out across the country, with the elderly and vulnerable being prioritised.

The Government has now hit its target of offering everyone in the top four priority groups across the country the Covid-19 vaccine by February 15.

The next aim outlined by ministers is to offer a vaccine to the estimated 17 million people in the next five groups by the end of April.

Will GDPR affect your Email Campaigns?

The most stunning views in Britain have been revealed