Both presenters were back on the BBC Breakfast sofa this morning after being absent from Thursdays show.

They started with the big headlines of the day and interesting items from the national newspapers, before Naga asked Charlie: “How flexible are you?”

Clearly reluctant to answer, Charlie repeated his question about the nature of the story.

But Naga was giving nothing away and said: “It’s a very simple question, Charlie. 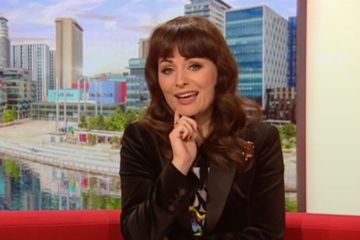 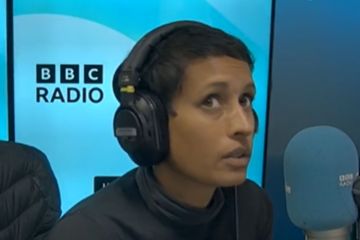 “It’s not like going into anything too personal. Are you flexible?”

Charlie replied: “Let’s see the picture,” and with a giggle Naga showed him the photograph she had for the story.

The snap was of 14-year-old Liberty Barros – better known as the “world’s most flexible girl.”

Liberty, from Peterborough, set a world record for the most number of repetitions of the most flexible backbend movement in the world.

Naga said: “In that position she walked 20 meters, so bent backwards holding her knees and she did it in 22.53 seconds and she set a new Guinness World Record.”

Examining the photo, Charlie said: “It takes you a little while to kind of work out the picture doesn’t it? As in what’s facing each direction.”

Charlie congratulated Liberty before turning back to the cameras and advising viewers not to try it at home.

BBC Breakfast airs daily from 6am on BBC One.