The Great Celebrity Bake Off for Stand Up To Cancer has crowned its newest champion after some stiff competition in the tent.

After some impressive vegetable cake slices, some soupy Queen of Puddings and a biscuit self-portrait, Reece was named the winner.

A delighted Reece said: ‘Can you believe it? Who have thought that when we started this so many years ago I would have arrived standing here with this prize? I won it! I cannot believe it. I am genuinely thrilled.’

The League of Extraordinary Gentlemen star triumphed early on, getting a handshake from judge Paul Hollywood for his signature bake.

He finished second in the technical challenge and impressed with his showstopper, a biscuity version of himself performing Hamlet on stage. 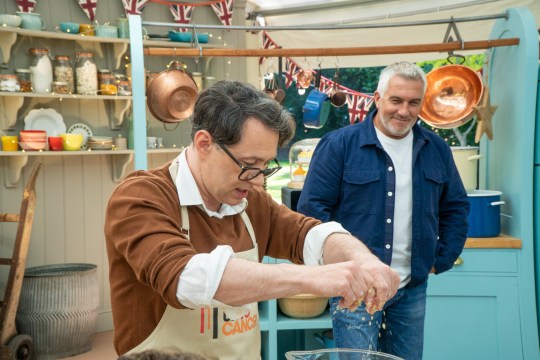 After getting a Hollywood handshake, Reece said: ‘I don’t think he dishes them out willy-nilly, all round good result. I’m floating on air.’

Dizzee proved to be a highlight on the episode, impressing judges Paul and Prue Leith with his skills, despite having never baked before.

The Fix Up, Look Sharp rapper struggled to get his head around what ‘stiff peaks’ were and was initially confused by a vanilla pod, but the flavour of his carrot cake – complete with Toots the Rasta carrot on top – went down well. 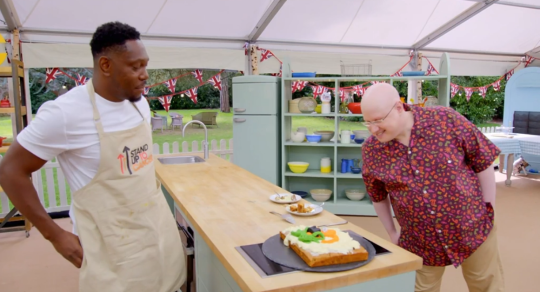 Dizzee Rascal showed promise despite not baking before (Picture: Channel 4)

For his showstopper the musician recreated the cover of his first album Boy In Da Corner on a bed of chocolate biscuits with a ganache centre.

Changing the title to Bake In Da Corner, Paul joked that he looked like a ‘chicken’ sitting in the corner.

Prue meanwhile criticised the thickness of the biscuit, saying it was difficult to eat.

The Great Celebrity Bake Off for Stand Up To Cancer continues Tuesday at 8pm on Channel 4.