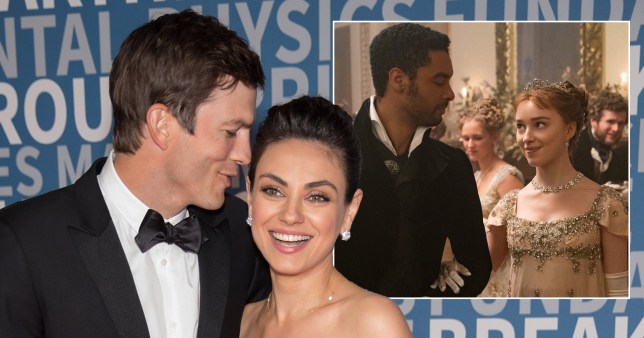 The couple have been spending lockdown together with their kids Wyatt, six, and Dimitri, four, and like many of us, Mila, 37, has become obsessed with racy Regency-era drama Bridgerton.

However, some of the show’s raunchier sex scenes – and there are many to choose from – left her husband Ashton, 42, rather confused.

Speaking to Hoda Kotb and Jenna Bush Hager on Today, Mila fangirled over the show, saying: ‘So, I’m on episode five for anyone who’s seen it, y’all are aware what happens in episode five.’

Explaining that she usually is fast asleep at 9.30pm, the That ‘70s Show star said: ‘Last night, I clearly stayed up until midnight. I was like, “What’s happening in this show”. 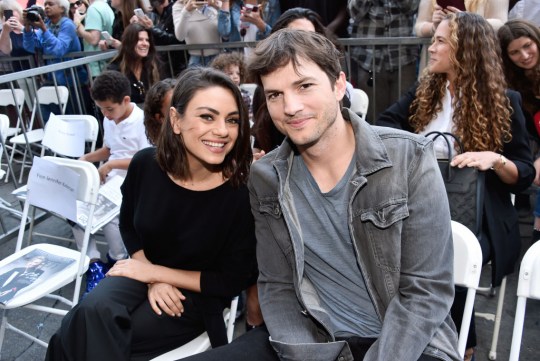 Ashton was confused when he woke up (Picture: Alberto E. Rodriguez/Getty Images for Disney)

Ashton said: ‘She’s watching in the middle of the night, and I didn’t know what was going on. I was like, “Is there someone else in the bed?”’

Mila, Hoda and Jenna then excitedly discussed how the show just gets better as it goes on, with Ashton saying: ‘You’re cheating on me with this show.’

We doubt Ashton is in a unique position, as Netflix announced the series, starring Phoebe Dynevor, Rege-Jean Page and Nicola Coughlan, has become its biggest show ever, with 82 million households tuning in.

Bridgerton has already been commissioned for a second series, so fans can look forward to even more sexy scenes in corsets and top and tails.

While Ashton mistook the show for something far more adult, star Nicola Coughlan knew what was coming – making Bridgerton a very awkward watch with her mother. 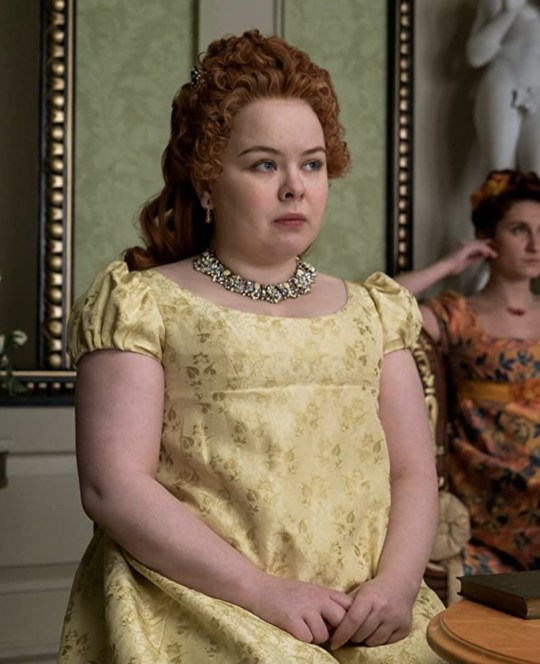 Nicola fast-forwarded through the ‘sexy bits’ when watching with her mum (Picture: Netflix)

The Derry Girls star said on the Make It Reign podcast: ‘I knew pretty well how the episodes went and the amount of sexiness in them. When I showed her the first episode and Johnny Bailey’s bum appeared very quickly into episode one, she was like “what’s going on?”

‘I had to say, “It’s not my fault, I didn’t write it, it’s romance novels and it’s a really important part of the story”, but I was still in trouble.

‘Then with episode six I thought, “Oh my god, what am I going to do? It’s non-stop sh**ging, I am going to be in so much trouble!” What I ended up doing was just fast-forwarding through all the sexy bits.’