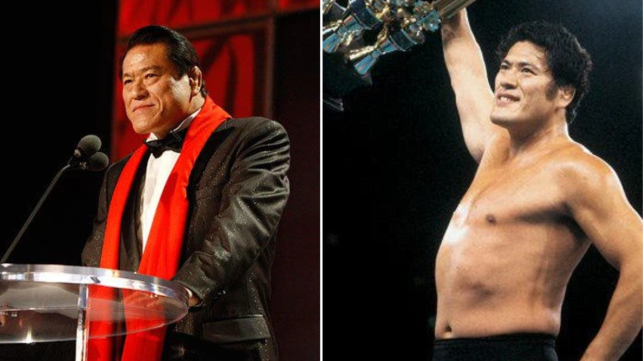 The Japanese pioneer and icon, who founded New Japan Pro Wrestling in 1972 and fought Muhammad Ali in a rare wrestler vs. boxer fight four years later before a career as a lawmaker, leaves being an incredible legacy, including a WWE Hall of Fame induction in 2010.

Although a cause of death has not been confirmed, in July 2020 he was diagnosed with a heart disease and he was seen in a wheelchair in recent years while battling systemic amyloidosis.

As well as running NJPW, Inoki as a top star in the company, winning multiple world titles and battling huge names like Hulk Hogan, Stan Hansen and Tiger Jeet Singh.

In his most significant and famous bout, he fought boxer Ali in a hybrid match, which is seen as paving the way for the creation of Mixed Martial Arts.

In 1989, he moved into politics and was elected to the Japanese House of Councillors, where he served until 1996 before another run from 2013 to 2019, when he retired from politics.

WWE said in a simple statement alongside an obituary for the late legend: ‘WWE is saddened to learn of the passing of WWE Hall of Famer Antonio Inoki.’

The company’s boss Paul ‘Triple H’ Levesque added: ‘One of the most important figures in the history of our business, and a man who embodied the term “fighting spirit.” The legacy of WWE Hall of Famer Antonio Inoki will live on forever.’

All Elite Wrestling (AEW) boss Tony Khan commented: ‘RIP Antonio Inoki, a pioneer in the pro wrestling industry. Inoki’s influence and his achievements will live on forever in the wrestling world; he’s an inspiration to all of the dreamers. Thank you sir.’

WWE NXT star Meiko Satomura wrote, in a message translated from Japanese: ‘It feels like the end of an era.’

And New Japan, the company he founded, paid their own tribute, writing: ‘New Japan Pro-Wrestling is deeply saddened at the passing of our founder, Antonio Inoki.

‘His achievements, both in professional wrestling and the global community are without parallel and will never be forgotten. Our thoughts are with Inoki’s family, friends and fans.’