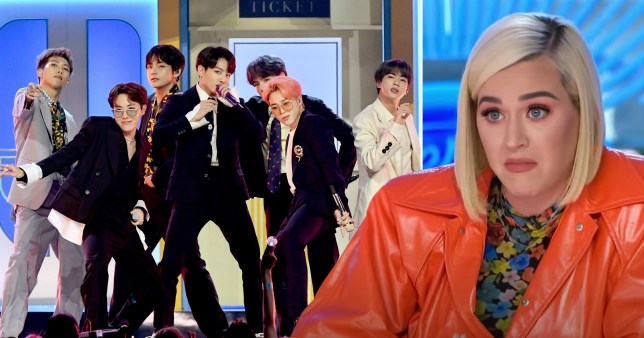 BTS fans are not happy with Katy Perry for giving the band a shout-out on American Idol after she previously ‘dissed’ their fans during a 2019 concert (Picture: Getty/ABC)

Katy Perry has been slammed by the BTS Army for using one of the band’s phrases on last night’s American Idol.

The singer landed in hot water with the K-pop super group’s fan base after they claimed she had previously ‘dissed’ them during a 2019 concert and so she wasn’t allowed to use a phrase that is dear to the fandom.

Due to the fact his dance moves were stronger than his voice, he didn’t make it through to the next round.

Before eliminating him, Katy saluted him and said with a smile: ‘I purple heart you.’

The phrase is a reference to BTS members saying, ‘I purple you’ which means ‘I trust and love you for a long time.’

The issue BTS fans have with Katy using the phrase links back to a comment she made during the 2019 Jingle Rock concert in which she and the band were performers.

In a video clip from Katy’s performance, the singer stated: ‘Most of you get to stay late past your bedtime.’

The comment immediately angered the Army who chose not to react to her show, while others left the arena.

The star was called out by BTS fans who claim she had insulted the Army in 2019 (Picture: Twitter)

Sunday night saw the BTS Army take to Twitter to call Katy out as one wrote: ‘Not her who called BTS Army a bunch of kids.’

Another wrote: ‘How dare you use the color purple when you so blatantly fail to acknowledge the work of the artist for whom purple means so much. Shame on you.’ 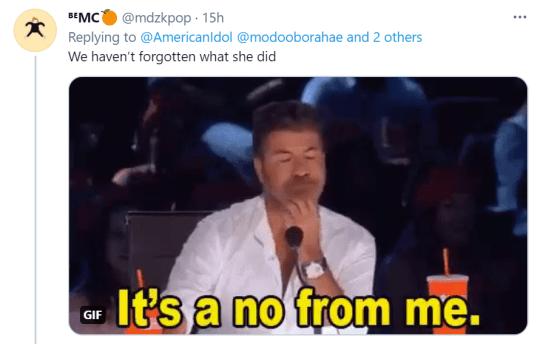 The singer had allegedly made a joke about BTS fans being ‘kids’ which clearly did not go down well (Picture: Twitter)

One fan added: ‘No. No thank you, Katy Perry. This is going to be a hard pass. Not after how you treated BTS’ fans at that concert. Total clout chaser!’

Another fan stated: ‘I purple you is a BTS term that a BTS member came up with. No one else but armies and BTS use it, it’s a sanctuary word for us and means a lot.

‘Katy Perry called us all children and made a joke that it’s past our bedtime. We’re not dumb, okay.’

Elsewhere, other members of the Army stood up for Katy as one wrote: ‘To all the ARMYs (specially the immatures) First of all, you have no rights to attack Katy Perry because shes not doing anything wrong (obviously)

‘Second, can y’all grow up and be matured. Stop being a crybaby+ (sic)’

Meghan Markle Held Back While Talking About the Queen, Expert Says