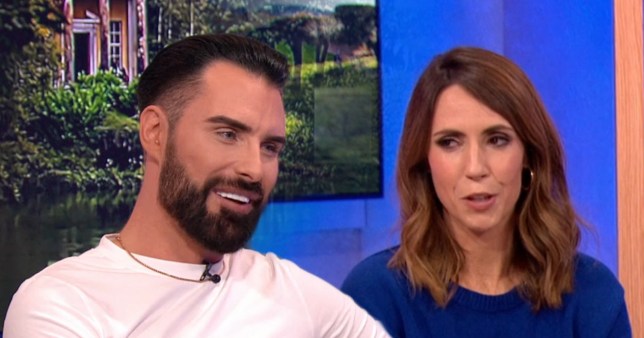 Viewers of The One Show spotted a touching interaction between host Alex Jones and guest Rylan Clark following an interview on the darkest times in his life.

Rylan, 33, appeared on the show to discuss his memoir, Ten: The Decade That Changed My Future, and the difficult times he has faced recently following the break-up of his marriage.

Addressing the breakdown of his marriage last year and his attempt to take his own life, Rylan told Alex: ‘Just to get it out of the way. Obviously last year was awful and we were speaking a lot and One Show actually, hosting, was one of the first thing that I properly got back into with you after I got quite ill last year.’

He admitted that reliving the rough time in his life was more difficult when it came to sharing it in his book than it had felt at the time.

‘It was harder writing about it than actually living in it which is quite strange,’ he admitted. ‘Because I started writing the book before my marriage ended and then all of a sudden I am writing the book and the book becomes a different book because it’s a massive part of my life.’

Rylan added: ‘There was things that I were going to put in the book that I ended up didn’t from a legal point of view.

‘Not that it was anything salacious, just things like I would receive a text saying x, y, z and the legal team would be like “can you just show us that text so we can prove it if ever” and I was like “sure” and just scrolling back, “I can’t do this”, so I took it out because I didn’t want to live it. I got so ill last year that I don’t need to do that.’

Following Rylan’s candid chat, viewers spotted Rylan mouth ‘I love you’ to Alex, before she mouthed ‘I love you’ back silently.

Not one for celebrities but a lovely moment there between Rylan and Alex Jones on #TheOneShow. He really does seem like one of the most genuine people on the telebox.

They tweeted: ‘Not one for celebrities but a lovely moment there between Rylan and Alex Jones on #TheOneShow. He really does seem like one of the most genuine people on the telebox.’

Another added: ‘@Rylan and Alex Jones mouthing “I love you” on #TheOneShow just broke me.’

Everything to Know About Theme and More