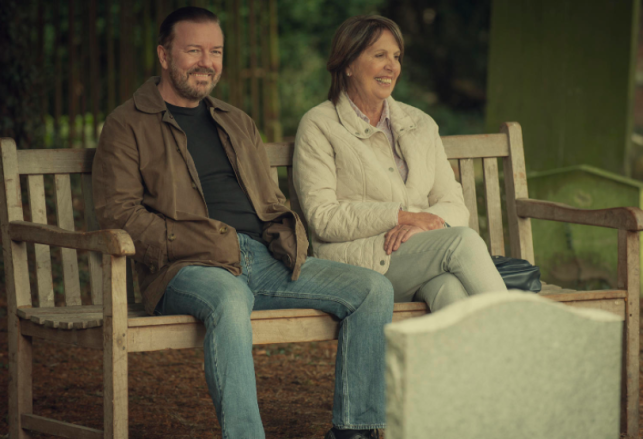 Ricky Gervais looked over the moon as filming for After Life series 3 began this morning.

The comedian announced over the weekend that production on the Netflix show’s final season would begin this week, and he delighted fans with a first-look pic on Monday.

Dressed in his character Tony Johnson’s signature green jacket and proudly holding the clapperboard ahead of the first take, Ricky flashed a huge smile at the camera.

Ricky confirmed that After Life would be returning for a third and final season last May.

Breaking the news on Twitter, he said: ‘Because so many of you watched #AfterLife2 so quickly and made it Number 1 again, the nice people at @Netflix have suggested that I get off my fat a**e and do another season. This is all your fault.’

He later added in a live chat that the upcoming chapter will definitely be the last season of the show, joking that he’ll ‘take Tambury out with a meteor’ to make sure he can’t come back.

Originally premiering in 2019, After Life follows a man called Tony (played by Ricky) who is struggling to cope in the aftermath of the death of his wife Lisa (Kerry Godliman).

Ricky previously opened up on the ‘daunting’ task of producing another season.

‘You put everything into everything you do and you burn bridges and you work yourself into corners because it was right at the time,’ he told Metro.co.uk.

‘So it’s really got to be wanted.’

He also said that he wrote season two to prove that ‘no-one just snaps back from depression.’

‘My agent got 300 letters,’ he told Dermot O’Leary on Radio 2. ‘They saw something they identified with.

‘You feel a bit of responsibility so I put it into the second series, he couldn’t get better, you don’t snap back from depression.’

After Life is available to stream on Netflix.