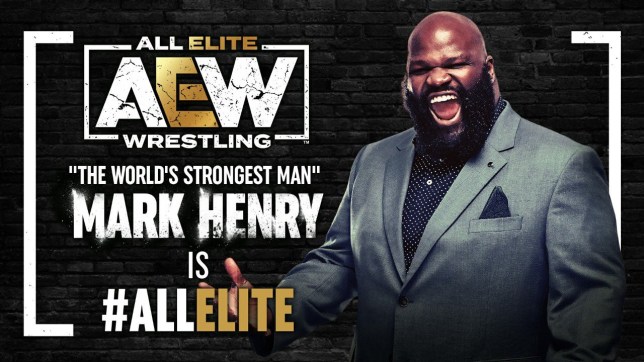 Business is picking up! (Photo: AEW)

Mark Henry is All Elite – the World’s Strongest Man has signed with AEW.

The WWE Hall of Famer is the latest big name to make the jump to the wrestling giant and he made his debut at Double Or Nothing on Sunday night.

His arrival was announced by Tony Schiavone, who confirmed Henry will be an analyst on AEW Rampage as well as working as a coach to help craft the next generation of stars.

There’s no word yet on whether or not the former Olympian will step back in the ring, but given his recent comments, it could certainly be on the cards.

Henry – who still holds the WDFPF world records in the squat, deadlift and total – looks to be in incredible shape as he posed for the camera with a huge smile on his face earlier this month.

Revealing his current target, he tweeted: ’20 pounds to go.’

Henry – whose most recent in-ring appearance came in the Andre the Giant Memorial Battle Royal at WrestleMania 33 in 2017 – got plenty of messages of support from friends and fans alike.

Natalya – one half of the Women’s Tag Team Champions with Tamina – added: ‘Proud of you!’

The 49-year-old Hall of Famer retired from the business in 2017, but earlier this month he revealed he’s keen to get back in the ring for one more run.

Appearing on Booker T’s podcast, he said: ‘There’s a lot of kids that didn’t get to see me wrestle. They only saw me on YouTube. It’s been enough time that has passed.

‘Also, I quit before I had a last match, before I waved at everybody and said, “Ok. I had the pink jacket on. I’m sorry I lied to you all that I was leaving and retiring. I own it”.

‘But, I did not get that match where you go and pay tribute to the fans and you go and you wrestle somebody that’s up and coming that’s talented and you give them, what we call, the rub.

To get himself back in shape, the former world champion had already dropped almost six stone before revealing his latest milestone.

‘Listen, I’m going to go out there in really good shape. I’m already 80 pounds lighter than I was when I had my last match,’ he added.

‘I’m going to be in really good shape. It’s going to take a good man to beat me, but it might not take him long.

‘At 50, they don’t expect me to go out there and have a 20 minute, five-star match, just to be honest. I’m telling you that right now.’