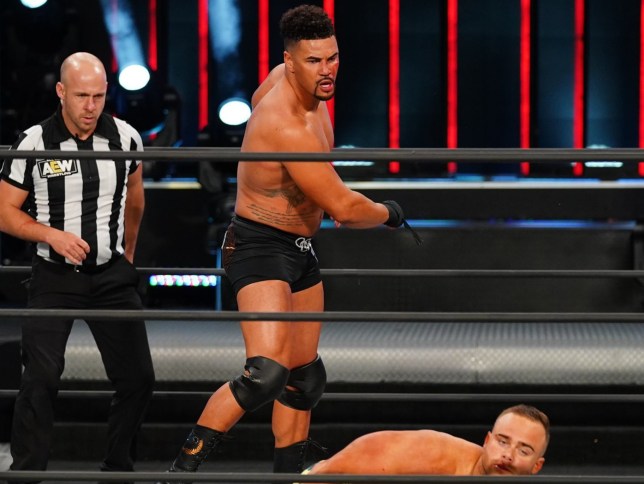 Ogogo is committed to being the best (Photo: AEW)

Anthony Ogogo is sacrificing everything for his All Elite Wrestling journey.

The 32-year-old star makes his AEW pay-per-view debut tonight against Cody Rhodes at Double Or Nothing, and it’s poised to be a breakout moment for a man who’s already done so much in the world of boxing.

The proud Brit will be defending his country’s honour against the American Nightmare – taking on his late dad Dusty’s Dream nickname for one night only – and he’s opened up on how tough the last six months have been preparing for this weekend.

He exclusively told Metro.co.uk: ‘I haven’t seen my wife in six months, because I’ve moved myself here to do this. My wife is beautiful – I haven’t had sex in six months, and she’s a stunner!

‘I’ve done that to myself for this! I’m sacrificing so much for this. I’m so committed to this – I will give this my all.’

For the wrestling world, there will always be some level of scepticism for someone coming from the outside world .

Make no mistake about it though – Ogogo lives and breathes this, ever since he first saw Kurt Angle and Taz lock horns at the Royal Rumble 21 years ago.

‘I’ve always loved this, it’s genuinely been a love for me – I wanna do this. I’m gonna give this the next 10 years of my life, give it my all and give it my absolute best,’ he said.

You’d be a fool to best against the former Olympic and pro boxer, whose career was cruelly cut short after an injury which left him with 78% blindness in his left eye.

He’s more determined than ever to make the most of his newfound career in the wrestling ring, particularly while he’s still at his peak as an athlete.

‘I had to retire at 30 years old because of my eye injury. I’ve now got 10 years – that backend of my career, I still want it to be the same,’ he explained. 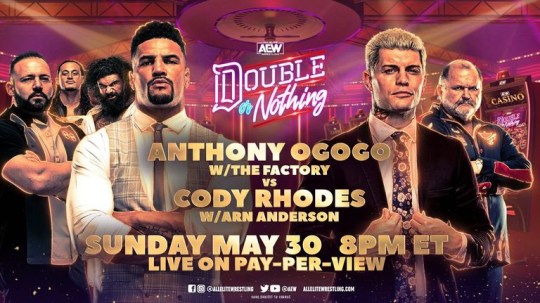 Ogogo faces Rhodes live at Double or Nothing (Photo: AEW)

‘I’ve now got 10 years to do something, to have some fun! At 30, I was then coming into my prime physical condition. I didn’t wanna waste it. At 45, you can’t do things you can do at 30, your body doesn’t recover enough.’

Despite the severity of the eye injury and the risk around his vision, it’s not something Anthony gives much consideration to.

‘There’s a busy road there and there’s a local wine shop,’ he pointed during our Zoom chat before his big match. ‘When I’ve pured myself during the week training hard, I enjoy a class of whiskey and a cigar on a Friday night, that’s my little vice.’

Ogogo noted that thanks to what he sees as terrible driving in the United States – ‘it’s as simple as that’ – he could get knocked down crossing the round for his weekly tipple.

‘Yeah, I’m 78% blind in my left eye and I could go fully blind but I don’t go in there and worry about it.

Looking towards tonight’s clash, Ogogo – who won bronze on home turf at the Olympic Games in 2012 – is as calm and collected as he has been throughout his sporting career.

‘I’m really chilled out, I’m really relaxed, I’m really calm. Even when I was boxing in the Olympic games and professionally at the MGM Grand or the O2,’ he said.

‘I’m quite good at being in the moment and enjoying it. So I’m relaxed – as far as I see it, the pressure’s on Cody. In the wrestling world, who am I?’

He smiled: ‘I’m really happy, the pressure’s on him. I’m gonna go in there and do what I do, and smash his head in. I’m cool.’

*See Anthony Ogogo vs. Cody Rhodes tonight (May 30) at AEW Double or Nothing live on Fite TV.

I had to quit my job after ditching eczema steroids