Adrian Dunbar reacted to Line of Duty being dragged into this week’s Prime Minister’s Questions session, during his debut stint on Have I Got News For You.

Earlier this week, Prime Minister Boris Johnson and Sir Keir Starmer referenced AC-12 and their hunt for bent coppers during a sparring session in parliament.

‘The more I listen to the Prime Minister the more I think that Ted Hastings and AC-12 are needed to get to the bottom of this one,’ the Labour leader announced, suggesting the BBC drama cast should be introduced to ‘get to the bottom’ of ‘government sleaze’.

Picked up on the BBC reference, Mr Johnson took to the microphone to share his rebuttal, telling the MP: ‘That why we’re putting in an independent review, that’s why we have tougher laws on lobbying…

‘Yes we are getting on with rooting out bent coppers.’

A spin-off no one knew we needed, least of all Adrian – who plays Ted Hastings in the drama, alongside Vicky McClure as Kate Fleming, and Martin Compston as Steve Arnott. 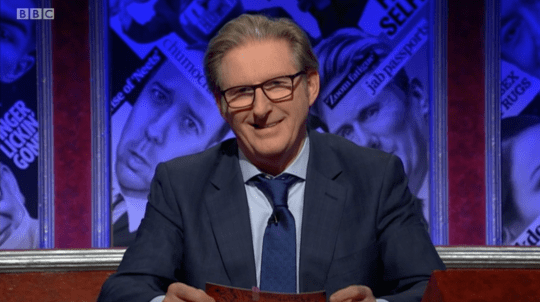 Responding to a clip of the parliament scenes on Friday’s episode of HIGNFY, the actor remained deadpan as he said: ‘Very good there, Boris…

‘Well done for picking up the torch there…’

Adrian made his debut on the BBC show panel, appearing beside comedian Katherine Ryan and The Sunday Times’s Political Editor Tim Shipman and team captains Ian Hislop and Paul Merton.

Fans were totally living for the episode – as well as the Line of Duty-isms he sprinkled in for us.

Flocking to Twitter, many begged for the actor to be made a permanent member of the panel.

‘Can Adrian Dunbar please host Have I Got News for You more often? He’s fantastic #HIGNFY #AdrianDunbar,’ one said.

‘Absolutley loving Adrian Dunbar on #HIGNFY I could listen to him all day. Mother of God fella [sic],’ a Twitter user commented.

‘#HIGNFY since Ted is being forced to step down from AC12, I guess a permanent presenting job could be the way forward…….Adrian Dunbar, that was a masterclass,’ another posted.

We totally agree, but until then there are some bent coppers to be investigated on Sunday’s Line of Duty…

Have I Got News For You continues on Fridays, at 9pm, on BBC One.