Adele Roberts is set to have a scan in six weeks that will determine whether or not she’s cancer free, having recently finished her gruelling bout of chemotherapy.

In October last year, the BBC Radio 1 presenter shared that she had been diagnosed with bowel cancer, saying that it had ‘happened so quickly’ as she underwent surgery to have her tumour removed.

Having recently revealed that her bowel cancer had been growing inside her for 10 years before her diagnosis, the 43-year-old recently opened up about the impact her treatment had been having on her skin, admitting that she has suffered from skin insecurities ‘for most of my life’.

On Wednesday’s Loose Women, Adele joined the panel as a guest to talk about her treatment, having completed chemo earlier this week.

She said that it had been an ‘amazing week’, saying: ‘It feels wonderful to be here with you ladies. On Monday I had my final batch of chemotherapy.’


Adele was beamed as she explained how happy she was her chemo had ended (Picture: ITV) 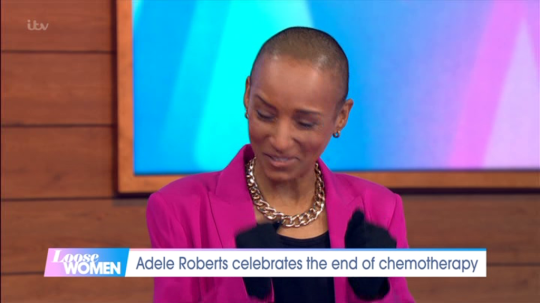 After Coleen Nolan remarked that the end of her treatment ‘must have felt so far away’ when she first started, Adele recalled how it began in December, having lasted over the past five months.

‘It felt like it was never going to end and every cycle I had it built and built and got sorer and sorer, but we’re there now. We’ve done it. I’m so excited,’ she said.

Next on the horizon for the former I’m A Celebrity… Get Me Out Of Here! star is a scan in six weeks’ time, which will inform her whether or not the cancer has cleared in her body. 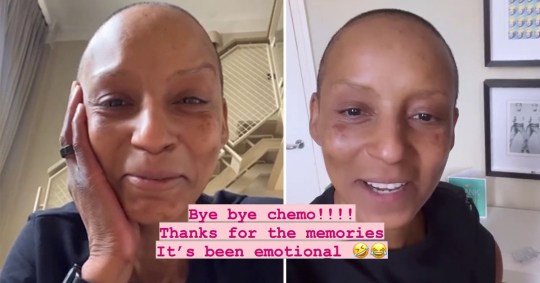 Adele celebrated the end of her chemo on Instagram (Picture: Adele Roberts/Instagram)

‘In six weeks I’ll have a scan, and then hopefully I’m cancer free. So that’s when I’ll get the final ok, hopefully. Fingers crossed,’ she said.

During her interview on Loose Women, Adele also opened up about the stoma she uses, as well the way in which her cancer treatment has affected the skin on her hands and feet, which is why she was wearing gloves in the ITV studio.

Several viewers praised her on the interview, with one tweeting: ‘Love seeing @AdeleRoberts on Loose Women looking so well and talking bowel cancer, chemo and stomas,’ alongside a heart emoji.

‘You are a Warrior Princess,’ someone else wrote, while another said: ‘If any one is the queen of raising stoma awareness its the amazing @AdeleRoberts you are an inspiration to all the people living with a stoma.’

Three of the main symptoms of bowel cancer, the NHS outlines, are ‘persistent blood in your poo, a persistent change in your bowel habit and persistent lower abdominal (tummy) pain, bloating or discomfort’.

It’s recommended that patients should seek advice from their GP if their symptoms last for at least three weeks.

On the website for Bowel Cancer UK, it explains that a stoma is when a section of a person’s bowel ‘is brought out through an opening on your stomach area (abdomen)’.

Their excrement is collected in a pouch or a bag that’s been attached to their skin around their stoma, with Adele sharing that she’s named hers Audrey.

I’m so curvy that I have to warn men on dating apps beforehand, otherwise they accuse me of catfishing them