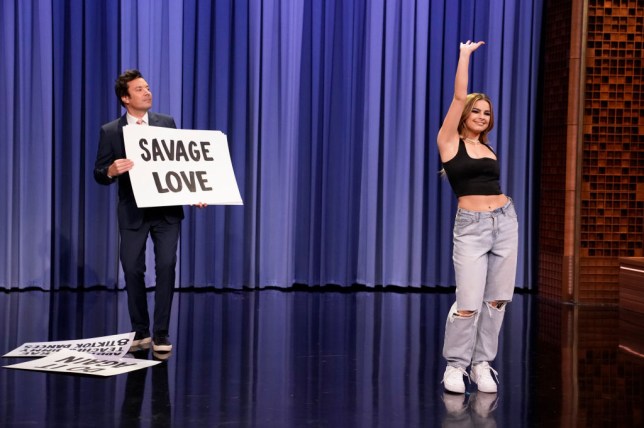 Addison Rae has addressed the criticism of her appearance on The Tonight Show Starring Jimmy Fallon (Picture: Getty)

Addison Rae has given her response to the backlash following her appearance on The Tonight Show Starring Jimmy Fallon.

The TikTok star was invited to appear on Jimmy’s talk show where she performed a series of popular viral dances as the host held up the title of each move in the background.

However the segment was heavily criticised on social media as most of the dances were made by Black creators and were not credited.

Many also felt that the creators should have been allowed on the programme instead to get recognition.

Addison has addressed the reaction when speaking to TMZ highlighting that they were given credit on the show’s YouTube channel.

She added that she hopes to get together with the original creators when they are able to and dance together.

Addison said: ‘I think they were all credited in the original YouTube posting, but it’s kinda hard to credit during the show.

She added that she had ‘so much fun’ on Jimmy’s show and she was ‘very grateful and thankful’ for the opportunity to appear.

‘I think ever since the beginning, I’ve been talking with most of them [Black creators]. I definitely want to collab with a lot of them,’ Addison said.

‘So hopefully once the world opens up, we can all meet up and do something together because it’d be so much fun!’

Some of the criticism came from The View’s Sunny Hostin who called it ‘a miss’, and writer Roxane Gay who tweeted: ‘None of Addison Rae’s lil friends told her to maybe not go on national TV to do Tik Tok dances created by [black] women.’

What time does the Co-op open today? Lockdown opening hours and delivery options