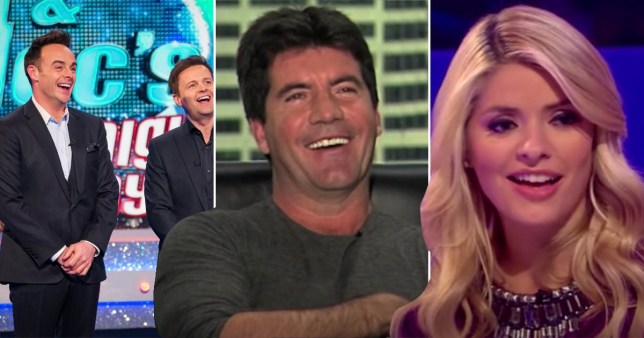 Their pranks have been legendary (Picture: Rex /YouTube/Saturday Night Takeaway)

On Ant and Dec’s Saturday Night Takeaway, the presenting duo are known for their mischievous pranks.

Over the years, they’ve managed to entangle some of the biggest names in showbiz in their pranking schemes, from music mogul Simon Cowell to This Morning presenter Holly Willoughby.

Whether they’re getting the celebs to follow ridiculous orders on Get Out Of Me Ear or pranking the A-Listers themselves, Ant McPartlin and Declan Donnelly have had the nation in hysterics with their antics.

Looking back over the years, there were some pranks that stood out above the rest as being particularly memorable… and just absolutely plain bonkers.

Here are seven of the funniest pranks ever executed on Ant and Dec’s Saturday Night Takeaway.

In 2016, Ant and Dec made a special appearance on James Corden’s The Late Late Show in LA to wreak a bit of havoc on the US talk show.

First, they held James up on his way to work, making the TV host increasingly irritable as he tried to get to the studio on time.

Later on, they pretended to be the fiancés of two audience members, making James cringe with their embarrassing answers on a game of Face Your Fiancé and shocking the TV personality as Ant’s character appeared to suffer an agonising fall while performing a head spin.

James was astounded beyond belief when the truth was revealed!

Simon Cowell has seen his fair share of musicians lacking talent through his work as a judge on TV shows such as The X Factor and American Idol.

But he was in for one of the most memorable auditions of his career when Ant and Dec turned up at American Idol as hopeful rapping stars.

The judging panel couldn’t contain their laughter as the supposed rappers performed, with Dec even trying his best to do some breakdancing.

Eventually, Simon cracked a massive smile as he realised what was going on.

When One Direction met some of their biggest fans

Even though they’re now following solo careers, One Direction continue to have one of the most dedicated fan bases in the world.

Back in their heyday in 2014, the band were taken aback while being interviewed by TV presenters from New Zealand (one of whom was Ant) when they met two of their biggest ever superfans (one of whom was Dec).

Dec pretended to be so overwhelmed by meeting the boy band that he required a ventilator to help with his breathing, with Harry Styles even stepping in to assist.

The group were fooled right until the very end.

When Holly Willoughby was tricked by a proposal gone wrong

In 2014, This Morning star Holly Willoughby was at a loss of what to do when she thought she was witnessing a proposal go very wrong.

The presenter was hosting what she believed to be an episode of Surprise Surprise, with a charity worker named Annabel being reunited with her boyfriend Richard, being played by Ant.

After boy band blue emerged to serenade Annabel, Richard got down on one knee… only for Annabel to reject his proposal and profess her love for Richard’s boss, who was being played by Dec.

When Holly found out what was really going on, she revealed she almost ‘threw up’.

It’s a complicated business being measured for a waxwork at Madame Tussauds.

But it gets even more complicated when Ant and Dec are behind the scenes pulling the strings.

When Olly Murs went for what he believed was a Madame Tussauds measuring, he ended up getting locked in the measuring mechanism and covered all over with a gloop-like substance.

The pop star was absolutely unimpressed by what went down – until Ant and Dec revealed their true selves, resulting in him bursting into laughter.

When Louis Walsh played it up as the ‘King of Pop’

With Ant and Dec in his ear, Louis was game for messing with people’s heads during a 2014 episode of Get Out Of Me Ear.

The former X Factor judge welcomed workmen into his home, showing them a room he had in his home covered with photographs of himself and bigging himself up as the ‘King of Pop’.

At one point in the segment, Louis even pretended to speak to Danni Minogue on the phone… but with a banana instead of a handset.

No matter how silly it became, Louis never failed to follow Ant and Dec’s instructions, to hilarious effect.

When Bradley Walsh was fooled for a second time

As if one time wasn’t enough, in March last year Ant and Dec managed to prank The Chase’s Bradley Walsh for a second time on Saturday Night Takeaway.

Roping in Chaser Jenny Ryan, aka The Vixen, and fake contestants on the quiz show to help out with the stunt, Bradley started to become visibly annoyed as the show didn’t go according to plan.

The Doctor Who actor was absolutely stunned as one of the contestants went for a whopping £200,000 against the Chaser, swearing as things became more peculiar by the minute.

When Ant and Dec ran into the studio from behind the scenes, Bradley looked defeated as he flopped over his podium. Third time lucky Bradley!

When do the clocks go forward in 2021 and will my phone update automatically? – The Sun