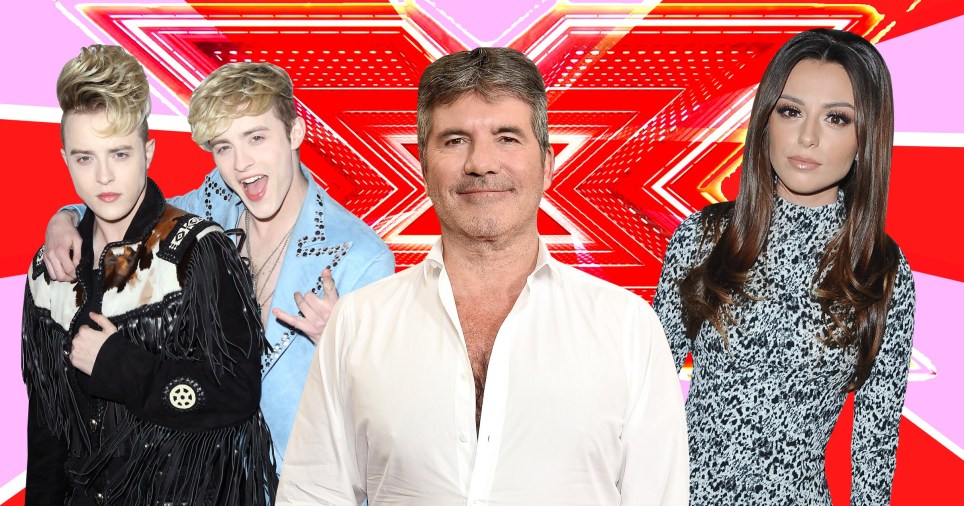 Jedward and Cher Lloyd have spoken out against Simon Cowell (Picture: Getty)

Simon Cowell has long been revered as the mastermind behind The X Factor and for his music mogul status, helping stars like One Direction and Little Mix skyrocket to fame.

But recently, a handful of former X Factor stars and artists managed under his record label, SyCo, have spoken out against him.

Jedward – Irish twins John and Edward Grimes who made it to the finals of The X Factor in 2009 – have been the most outspoken, branding the 61-year-old ‘nothing but a bad facelift.’

They claim to have seen One Direction and Little Mix’s contracts, describing the bands as ‘legally f**ked’.

Meanwhile, Cher Lloyd, who appeared in the 2010 series, has made reference to being ‘exploited’ after leaving SyCo in 2016.

Elsewhere, Rebecca Ferguson, another 2010 contestant, has been fighting for an overhaul of the music industry and its culture after her experiences.

Steve, the first ever winner of X Factor, has been open about his dislike for Simon.

He has often spoken out against Simon and The X Factor in the years following his win, even writing a book about the whole affair, with the official synopsis reading: ‘It was the stuff dreams were made of. It became the ultimate nightmare.’

Simon later hit back at Steve, and is quoted as saying: ‘He was horrible, ungrateful and totally selfish. He just wouldn’t listen.’

Speaking to Larry King on his US chat show, she said: ‘We all have a specific thing in life that we want to get to and I don’t deal very well with people having [control].

‘I think he found me – I wouldn’t say disobedient – but a little bit [difficult].’

Following One Direction’s split, and after embarking on his solo career, Harry left SyCo.

Niall left Syco in 2017, but there seemed to be no bad blood between them.

He told The Sun at the time that he hoped Simon ‘didn’t hate him’ for the move, and that he needed a ‘fresh start’.

Although Simon had a huge role in launching One Direction, Liam chose not to sign with him for his solo career.

He said he was ‘grateful’ for Simon’s guidance, adding to The Sun: ‘There was never even a deal that crossed the table from [Simon], so it wasn’t even like it was ever open for business in my head.

‘But then all of a sudden he was very upset and scorned by what had happened but I just had to separate myself properly.

‘I really wanted to get away from everything that I did.’

Although he said he’s moved on from the drama, Steve still insisted he wanted an apology from Simon.

‘If he could just accept that he made a mistake and could apologise for screwing me over, unleashing Max Clifford on me, if he could just say yes, Steve was a great singer, he had potential but certain things happened,’ he told the Daily Star.

Leigh-Anne Pinnock told Metro.co.uk of the split: ‘It was definitely strange because we’d been with SyCo for so long and a bit of a shock to the system.’

Ashley Fongho later told The Sun: ‘How was it last year? Frustrating, confusing, mostly  because it affected us putting out music.

‘When we came off The X Factor there were suddenly a lot of cooks in the kitchen. It has taken us a while to get back to where we were before.’

‘Years later, I do have some anger towards people for doing that to me. I definitely don’t say hello and shake hands with certain people.’

Louis was one of the last One Direction stars to leave SyCo, tweeting at the time: ‘Hope everyone is doing ok! Just wanted to let you know that Syco Music and I have agreed to part ways.

‘I’m really excited for the future and to be back in the studio writing the next album. Can’t wait to finally see you all on tour!!’

Little Mix insisted they have ‘no personal vendetta’ against Simon.

‘I think with Simon it’s all fun and games. We’ve got no personal vendetta against him,’ Perrie Edwards told Radio Times.

She added: ‘We moved on and, to be fair, over the years we didn’t actually see him that much. We’re not ones to hold grudges.’

With the release of their album Confetti, many fans noticed what seemed like a dig at Simon Cowell on Little Mix’s hit Not A Pop Song.

They sang: ‘I don’t do what Simon says/Get the message ’cause it’s read.

‘Be a puppet on a string/Works for you, but that isn’t me.’

After speaking out on her experience, Rebecca Ferguson launched a petition to debate reality stars’ welfare in parliament.

The Glitter & Gold singer suggested she was exposing herself to being blacklisted by the music industry but did not mention specifically who she was referring to.

In a TikTok duet, Cher sang about being ‘exploited’. She didn’t mention SyCo or Simon by name.

She sang: ‘How could I be so naive, they sold me the dream just to exploit me.

‘Said “Darling, darling, you’ll go far if you shake that ass and date a star, and if the record’s taking off, we’ll take the money.”‘

In a tirade on Twitter, Jedward slammed Simon and his alleged treatment of former X Factor stars.

They dubbed One Direction and Little Mix ‘survivors’ and claimed to have seen their contracts, due to being under the same management.

Jedward tweeted a screenshot of what appears to be a message from Louis following their tirade about Simon.

It simply read: ‘You guys have lost the plot hahahahahaha you must be high.’

April 6, 2021Ginny Lemon says they have ‘shocking’ stories about the x factor

Following Jedward’s string of tweets, Drag Race UK star Ginny, who previously auditioned for The X Factor, tweeted: ‘Does this mean I should start spillin about some backstage xfactor crap that went down?

Just as Jedward criticised The X Factor and Simon Cowell in their own Twitter tirade, Rebecca published an open letter calling for the Government to put policies in place to protect artists.

It has been confirmed that Rebecca will meet with Secretary of State, Oliver Dowden, from the department of Digital, Culture, Media and Sport at the beginning of May to debate musicians’ welfare and treatment.

Despite some stars speaking out against Simon and SyCo, others have defended him.

With the future of The X Factor looking uncertain, James Arthur, who re-joined SyCo in 2016, told Metro.co.uk: ‘Simon’s a real innovator and has great ideas and I’m sure he’s probably working on ways to make it a huge success again.’

The ITV talent show, which started in 2004, has been off-air for almost three years.

While the broadcaster hasn’t entirely scrapped plans for it, host Dermot O’Leary admitted he’s unsure if it will return.

‘I think when we had a rest, we thought that was probably the right decision. What shape it comes back in, I don’t know,’ he told Radio Times.

‘I’m in two minds, because half of me thinks there’s a reason why we rested it, because we were doing the same thing but then again, there is a real sense of simplicity to that show I love, which is great singers and great characters. It’s a celebration of British eccentricity! Let’s just get them out there and see where we end up.’

Metro.co.uk has contacted reps for Simon Cowell and SyCo for comment.

Harry and Meghan Markle: Police called to home nine times in as many months