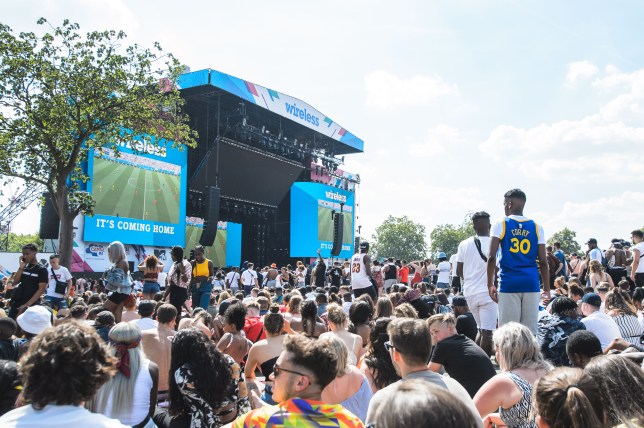 Wireless Festival will be taking place in Crystal Palace this September (Picture: WireImage)

Wireless Festival will look and feel a little different these days as it has moved to South London for the first time.

London’s homegrown music festival was held virtually last year due to the coronavirus pandemic but hopes to invite crowds physically later this year.

For the first time, Wireless will be held in Crystal Palace after relocating from Finsbury Park where it has been held for the last few years.

Announcing the drastic changes in a statement, the Wireless team said: ‘Early July was too much of a worry for us in the government’s timing out of lockdown and we really wanted to ensure Wireless could happen this year.

Unfortunately we couldn’t make it work in Finsbury Park in September but we can in the beautiful Crystal Palace Park.

The only missing piece of information is the line-up which hasn’t been announced. Artists such as Skepta, A$AP Rocky and Meek Mill were among those scheduled to perform at the cancelled 2020 festival.

Reactions to the new changes have been mixed with some fans happy the event will take place in their local South London, while others aren’t convinced it will happen in September if another lockdown is put in place.

‘Oh noooo wireless festival has moved from finsbury park to crystal palace. What about Hype Park you all forgot about the OG!’ one said of the new location.

Thrilled that it’s heading to Crystal Palace, one said: ‘At least Wireless knows south is an elite location to host a music festival.’

One joked: ‘Wireless festival at Crystal Palace park?? I might just pop in on my lunch break.’

However, one sceptical critic said: ‘Why are they even allowing festivals to pretend they will be on this summer, 5k fine to leave the UK but please buy your wireless ticket.’

Struggling to choose between all the other music events taking place in September, one chimed in: ‘Having Wireless festival and Parklife both on the same dates is a major L.’

Wireless launched in 2005 at West London’s Hyde Park where it was held until 2012. It was hosted at East London’s Olympic Park in 2013 for one year only before finding a more long-term home at Finsbury Park in North London.