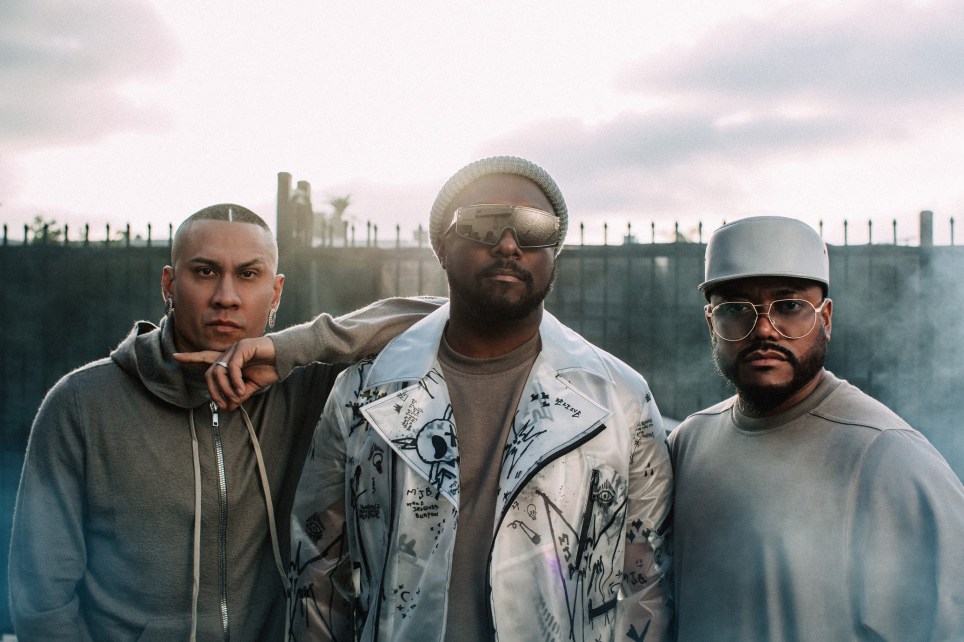 Will.i.am has recalled the ‘scary time’ when Black Eyed Peas’ hit singles, such as Where Is The Love?, were originally rejected by their record label, sparking fears that the group would be dropped.

Black Eyed Peas pretty much dominated the charts in the early noughties with Where Is The Love?, My Humps and Shut Up among their string of chart-topping and top five singles.

However, it all could have been so different as executives at their record label were convinced that their bangers would flop.

Of course, they couldn’t have been more wrong.

Will.i.am, 45, revealed the challenges the group faced as they embarked on a tour just one day after the September 11 terror attacks.

‘That was really frightening… Travelling and touring was scary,’ the singer told Metro.co.uk exclusively.

‘We wrote Where Is The Love? four days after the tour was finished. Then we turned in the record to the record company and they didn’t think it was a hit.

‘Where Is The Love?, Let’s Get It Started, Hey Mama and Shut Up, those were the songs that we turned in to the label and they didn’t think they were hits. That was scary because we were like, oh shucks we’re getting dropped,’ he said.

The problem was that executives weren’t passing on the Peas’ records to then Interscope label boss Jimmy Iovine.

He explained: ‘It was hard lessons. There was a lesson that happened of playing politics right where I was doing all this work.’

Will.i.am recalled how he secured a huge Coca-Cola deal but was kicked off the project because the Peas had done another brand deal with rivals Dr Pepper.

‘My manager threatened to sue Interscope, so Jimmy Iovine’s like, “What’s going on here? How much money are you looking for? My bad, I didn’t know this was happening”,’ Will.i.am revealed. 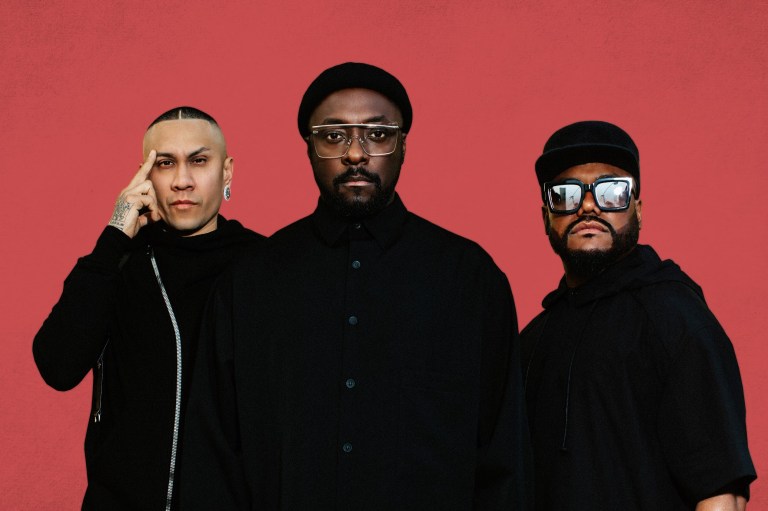 will.i.am (centre) admits it wasn’t easy for Black Eyed Peas to return from their eight-year hiatus

The situation taught Will.i.am one of the biggest lessons he’s learnt from the music industry: ‘Not everything should be handled with a lawsuit or lawyers when you can sit down with people and work things out. Jimmy’s like family to me.’

He went on: ‘So 2001 to 2003 was a very tough two years. The result that came out of that was when he heard Where Is The Love?, he was like we need to put this out right now. There’s always the middleman or woman that handles the relationship between the band and the president or CEO, and from that point on it was just Jimmy and I and no middleman.’

Of Where Is The Love? and its near-miss, Will.i.am said: ‘Had I listened to my manager and attorneys and sued, those lyrics wouldn’t have been all over the radio and inspired people’s hearts and minds.’

Black Eyed Peas are still going strong, albeit without Fergie. Will.i.am, apl.de.ap and Taboo still know how to turn a song into a chart hit – their most recent album Translation has spawned the bangers Mamacita, Feel The Beat and Girls Like Me featuring Shakira.

They’ve also teamed up with Israeli duo Static and Ben El for the infectious TikTok hit Shake Ya Boom Boom.

Will.i.am doesn’t take their longevity for granted as their comeback in 2018 could easily have gone south.

‘I would say this era we’re in is the most exciting one because this one was the hardest to have success,’ the Voice UK judge admitted.

‘Just getting on was hard, don’t get me wrong, then when we found success with Where Is The Love? That was difficult.

‘Sustaining success with Don’t Phunk With My Heart, Don’t Lie and My Humps, that was scary sustaining it. Then exploding it when we decided to switch up genres for the third time with electronic dance music and I Got A Feeling and Boom Boom Pow, that was like what? No one expected us to do that but we went to Mars and beyond on that one.’

He continued: ‘But this one, after an eight-year hiatus, this one was the hardest one to resurface.

‘You’re in your 40s, you’ve been gone for eight years and you’re a trio so automatically the cards are against you because people are going to think, “Oh, the Black Eyed Peas as a trio? Were they a trio when they had success and they were successful as a quartet? I think their time is up”. 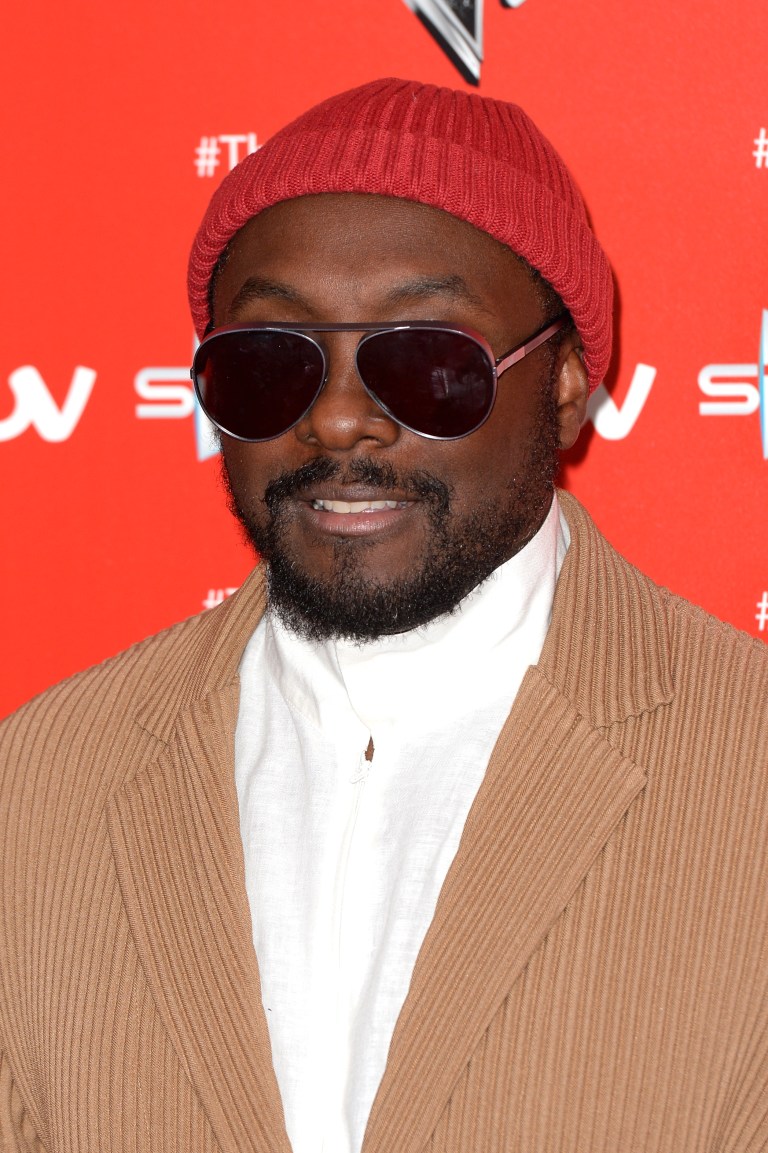 ‘If that was the case, boy was that an amazing run from 1995 when we started the group to 1998 when we put out our first album to when we decided to take a hiatus in 2011.

‘That was a well-blessed run but that wasn’t it for us, the founding members. So to having success now, now seeing our fourth number one with A Girl Like Me with Shakira and all the others…

‘I learned how do you come back from a hiatus and everyone’s counted you out? Here we are eight years later with four number ones, in our 40s, signed to a new label.’

‘Man, I love this new era,’ he concluded with pure satisfaction.