Thomas Quasthoff has been retired from classical music for nearly a decade now. The German bass-baritone was in his early 50s when he made the shock announcement – an age when singers of his type are still in their prime. His elder brother Michael had been diagnosed with lung cancer in 2010, and that diagnosis and his brother’s subsequent death had left Quasthoff temporarily physically incapable of singing.

“Three days after being told that my brother would not live longer than nine months I lost my voice,” he recalls. “Doctors looked at my throat and said: ‘Everything is fine.’ But my heart was broken, and if the heart is broken …” he pauses. “The voice is the mirror of the soul.”

Ill health was cited as the reason for his retirement in 2012, but he had been voicing disquiet with the sterility and formality of the classical world for some time, and though his brother’s death was the trigger it may be that such a move was already brewing.

“I always wanted to belong to the group of singers who retired early enough,” he tells me over video call from his home in Berlin. “I never wanted to hear people say of me: ‘Oh, you should have heard him three years ago.’” But his decision was a blow to audiences – Quasthoff was one of the world’s finest lieder singers, acclaimed for the range and colours of his voice, for his attention to detail and exceptional directness as a performer. In 2009, the Royal Philharmonic Society awarded him the gold medal, its highest honour. Previous recipients have included Brahms, Elgar, Stravinsky, Bernstein, Barenboim, Jessye Norman and Sir Simon Rattle.

‘I preferred to play kings and ministers’ … Quasthoff as Amfortas in Wagner’s opera Parsifal in Vienna in 2004. Photograph: Herwig Prammer/Reuters

That Quasthoff had any career as a classical singer, let alone one this successful, was little short of amazing. While she was pregnant with him in 1959, his mother had taken the anti-morning sickness drug thalidomide and he developed phocomelia, which left him with stunted limbs. He is just over 4ft tall and life has been a constant physical struggle, yet he is not just completely without self-pity but is a force of nature – exuberant, loud, uncompromising.

He turned down offers to sing the hunchback Rigoletto. ‘I prefer to play kings’

During his classical career, he wanted no allowances made for his disability. “It’s a fact, not a problem,” he says. “I reached everything in my life that I wished. I was successful as a singer; I got a [music] professorship; I have been married for 15 years and have a wonderful, incredible, smart stepdaughter; we live in a beautiful house in Berlin. What shall I say? I know a lot of colleagues who are much less satisfied than I am.”

Quasthoff was determined never to allow his disability to define him. “I was educated like this,” he explains. “My parents and my brother never treated me like a disabled person. My brother’s friends were my friends. I was always part of a normal family life.” He likes to quote a line from his wife, Claudia Stelzig: “Tommy, for me you are not disabled, you are only smaller. That’s all.” 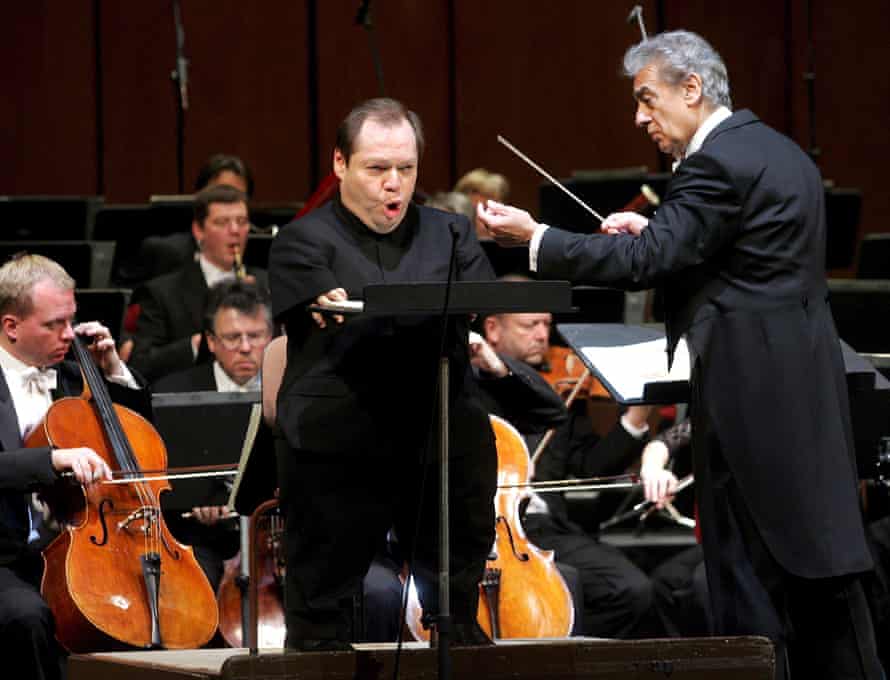 Placido Domingo conducts as Quasthoff sings during dress rehearsals of the inauguration concert to mark the opening of the Theater an der Wien in Vienna in 2005. Photograph: Robert Newald/EPA

He accepts that some of his audience may have come because they were intrigued by his personal story, but believes they were a small minority. “Most came to hear me,” he says, “because they were entertained in a high-quality way. I wanted to be accepted as an artist who was disabled, not seen as a disabled person who was an artist.” He realised audiences would never be blind to his disability – “If I come on stage, one metre 35 [tall], with short legs, short arms and seven fingers, who shall ignore it?” he says with his deep, resonant laugh – but hoped that once he opened his mouth in a lieder recital they would forget about it.

Quasthoff exudes self-confidence and resilience, but says this wasn’t always the case. “In the first 18 years there were more dark than positive sides,” he says, “especially during puberty when boys get girlfriends; I was standing [on the sidelines]. I wanted to study music, but the university said I was not allowed because I could not play an instrument.” He studied singing privately instead. The key, he says, is “not that these negative things are happening but how do you deal with them and what are you taking out of the situation?” He treated every obstacle, every setback, every dull job he had to do to pay for his singing tuition as a challenge and something from which to learn.

There was one overriding motivation driving him as he studied for more than a decade and a half and built a career. “I never wanted my mother feeling guilty,” he says, “and she did – from the moment I was born she felt guilty [for having taken thalidomide]. Even if I said 100 times that she should not, she still did, so I tried to show her that I had made the best out of my life and talent.” 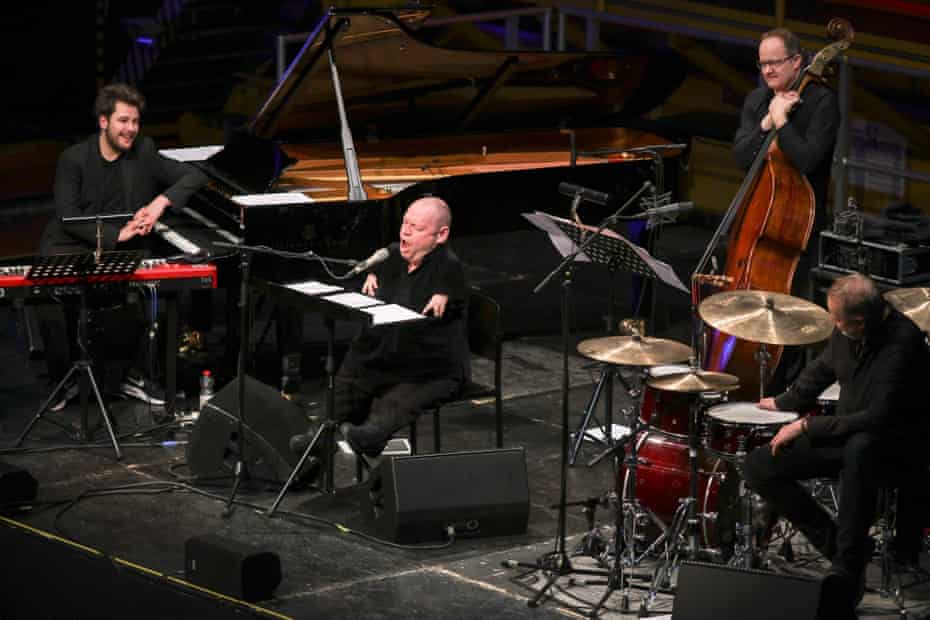 Since leaving the classical world and the return of his voice, Quasthoff has switched to jazz, which he had always enjoyed, and had dipped into even in his classical days: he had made a well-received jazz album in 2007. “I had done it very rarely in my classical time because it’s a different kind of singing, but I have now learned a new instrument – the microphone – and I love it.” He finds singing jazz and being part of a quartet a wonderfully relaxed form of music-making – intimate, pressure-free, music produced by a group of friends.

This month’s Edinburgh festival will showcase Quasthoff in three guises: singing jazz with his quartet, as a teacher, and performing in a semi-staging of Richard Strauss’s opera Ariadne auf Naxos. The latter does not, though, constitute a fully fledged return to the classical stage – he will play the spoken role of the pompous major-domo.

At the first meeting, the director asked what can I do. I told her everything that you want except making myself naked

Although he was to be found mainly in the concert hall as a recitalist, Quasthoff did sing some opera during his classical career, but his roles were restricted by his disability. In part, the restrictions were self-imposed – he rejected Daniel Barenboim’s liberating notion that he should sing Leporello in Don Giovanni, worrying about the moment in the opera when he would have to swap clothes with the Don, who was being played by the hulking Bryn Terfel. He turned down offers to sing the hunchback Rigoletto and the evil dwarf Alberich in Wagner’s Ring – casting that he thought a little too obvious. But he did play Don Fernando, the minister who secures Fidelio’s release from prison, and had a considerable success as Amfortas in Parsifal at the Vienna State Opera. “I preferred to play kings and ministers,” he says with another deep-hued laugh.

Quasthoff denies that he found opera unduly physically taxing. “I was in good condition,” he says. “At the first meeting, the director [of Parsifal] asked what can I do. I told her everything that you want except making myself naked. This is not going to happen, for two reasons. I do not want it, and I do not want that the audience is leaving in seconds!”

But his first love was always singing lieder. In opera, he says, he worried that his disability would become the focal point of the audience’s attention; in recitals, he was able to get audiences to suspend their disbelief. “As a lied singer, you have to be a very good actor,” he says. “I think that is missing at the moment”: he worries that singers today put beauty of tone above characterisation. “You have these mini-scenes that you have to fill with expression and colours. In opera, you can hide behind your clothes and the scenery.”

What about the classical world he has left behind? Does he have any qualms about resisting his agents’ blandishments to return? “I loved what I did, but the business is very superficial. You have a number of stars that I can count on my right hand – and my right hand is not very big! I had my time and was in a wonderful situation where I was able to have a world career. As a concert singer, to win six Echos and three Grammys is very rare.”

But he insists he doesn’t miss it. “I have nothing to prove any more.”

The Thomas Quasthoff Quartet is at the Edinburgh international festival on 24 August. Quasthoff gives masterclasses on 29 August, and performs in Ariadne auf Naxos, 25 to 29 August, available online 29 August to 27 February.