ACCORDING to the singular Wayne Coyne, “being in The Flaming Lips is like a never ending Spinal Tap moment”.

The Tap, as aficionados of the cult Eighties movie like to call them, were a mock rock band whose hapless antics were embarrassingly close to reality. 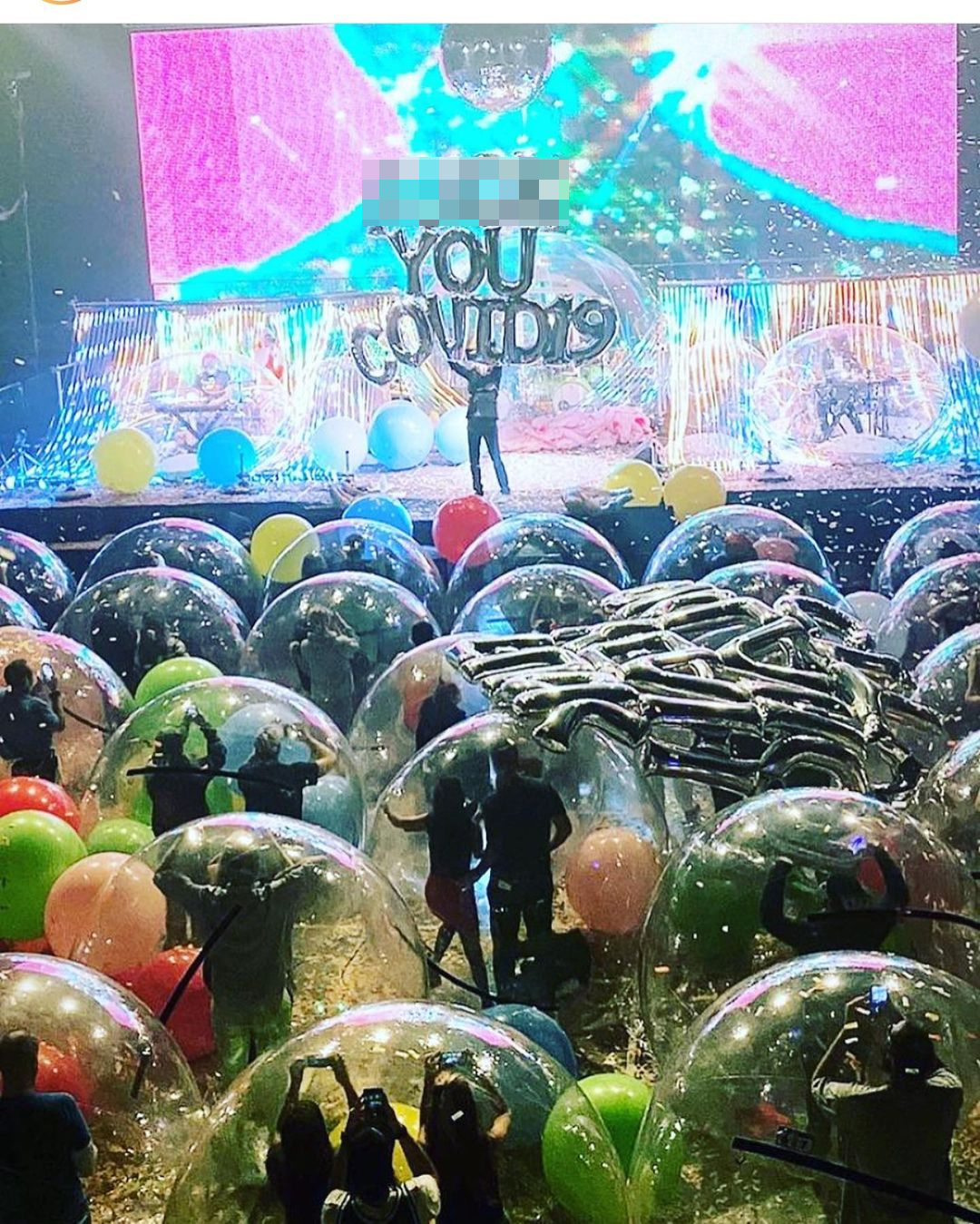 It probably comes as no surprise, therefore, that Coyne and co have given us the pandemic’s most absurdly brilliant musical spectacle.

At a time when live shows seem like a distant dream, The Flaming Lips are staging a series of concerts in their home town of Oklahoma City with each band member in their own inflatable “space bubble”.

The audience comprises a further 100 bubbles, occupied by either one, two or three people, for a fully immersive yet responsible, socially distanced event. 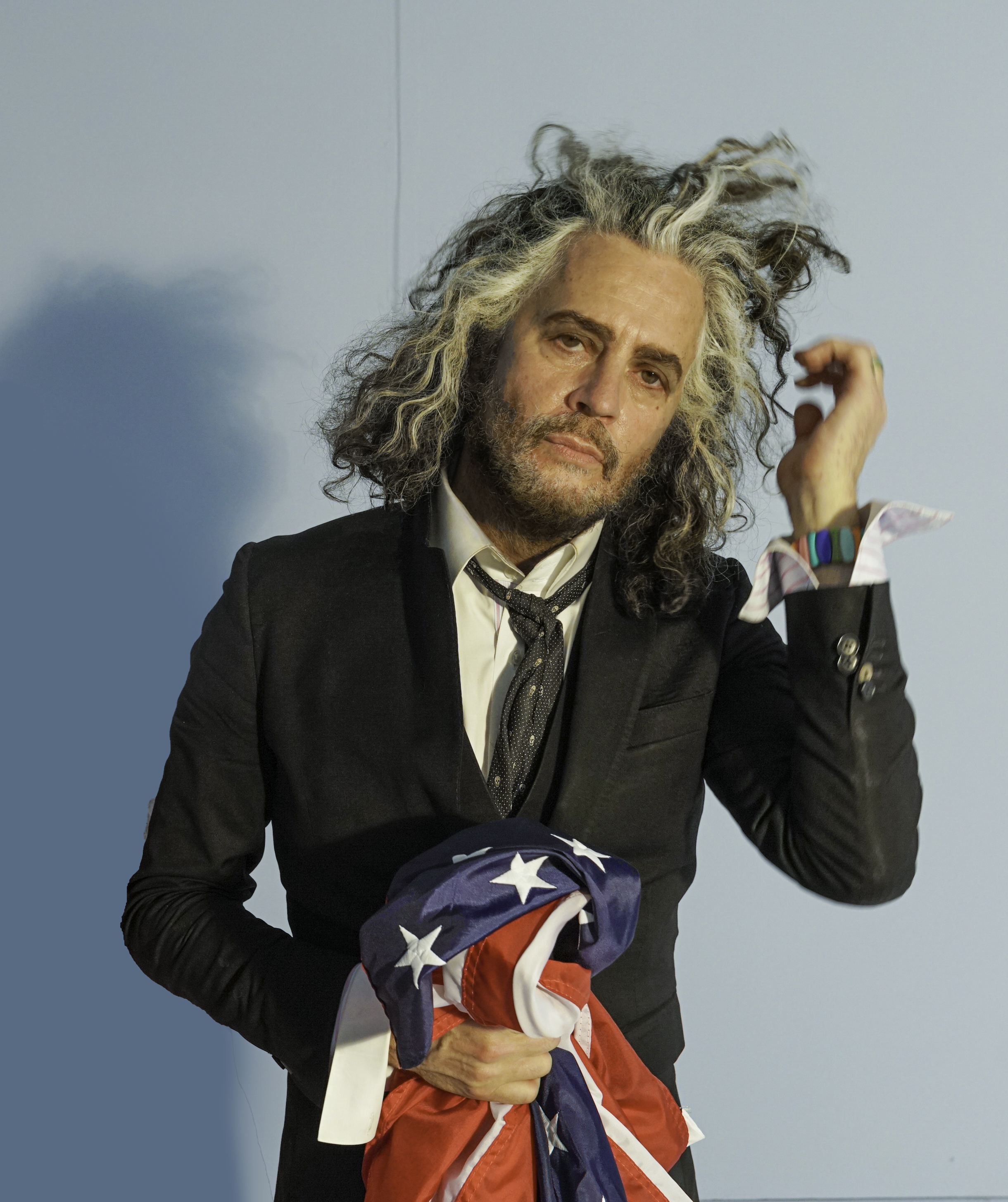 It probably comes as no surprise, therefore, that Wayne Coyne and co have given us the pandemic’s most absurdly brilliant musical spectacle

Coyne, who became a dad for the first time in 2019 and turned 60 last month, has been using the see-through spheres at Lips gigs since 2004. So why not extend the experience to everyone in the room?

He’s in the middle of “10,000 interviews” because the shows have captured the imagination of people across the globe, a testament to an enduring artist who thinks outside the box.

The long-time SFTW favourite still seems happy to chat for an hour via FaceTime, his preferred option during these straitened times . . . albeit from the side of Turner Turnpike, otherwise known as Interstate 44.

The moment we’re connected, I can’t help smiling at his ultra-expressive face framed by wild grey hair which is filling my screen.

“I’m driving at the moment. I miscalculated how far away the exit was on this turnpike,” he shouts above the traffic noise.

“I’m between Oklahoma City and Tulsa. I think I see a space so I’m going to pull over,” he continues. 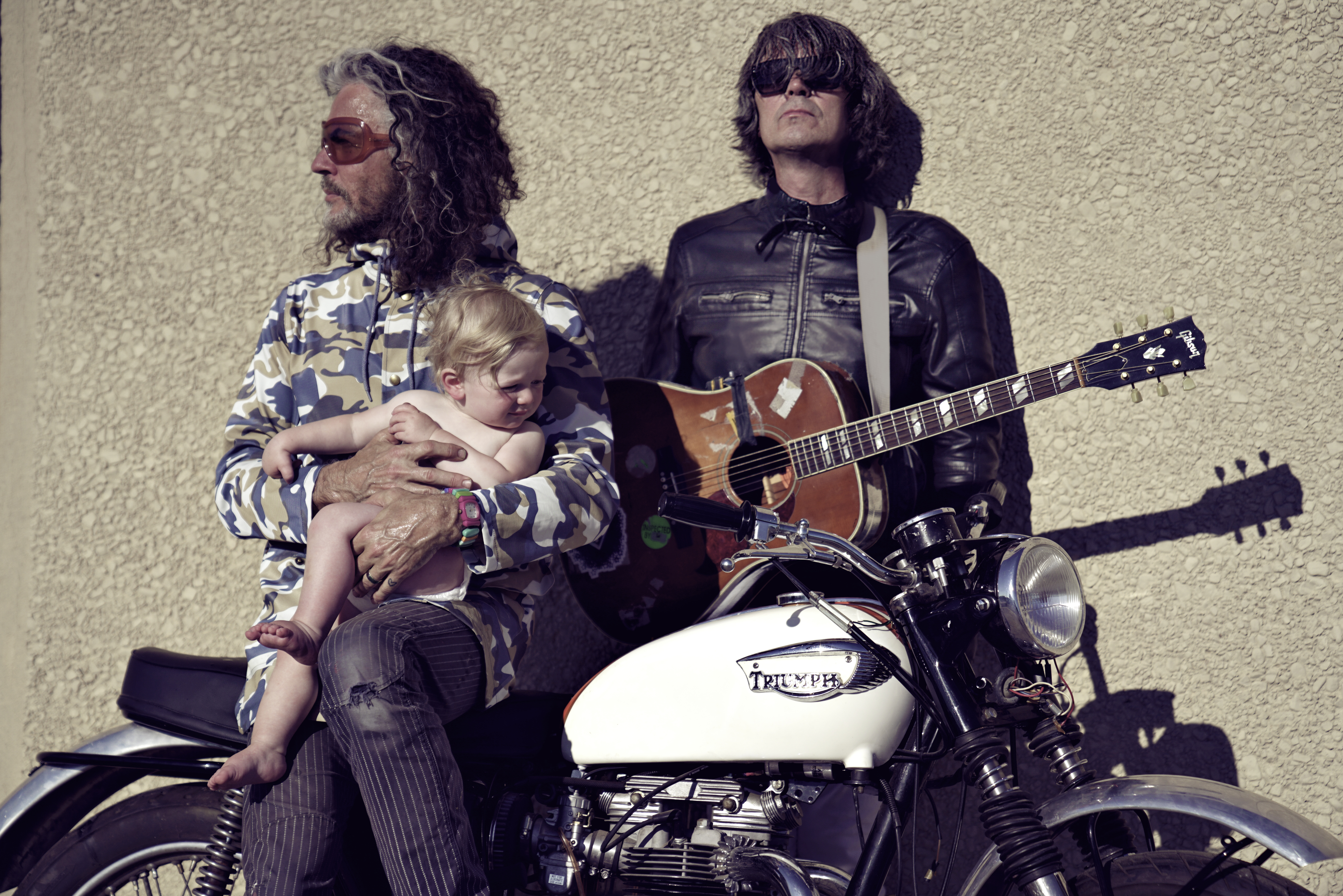 Wayne Coyne with his son and chief collaborator Steven Drozd

When he’s safely parked, I tell him I’m in freezing cold London, looking out over the Thames at night. I raise my phone to the office window so he can see.

“What a cool view!” He exclaims. “I’ve always loved London and we do miss it. I don’t miss sitting in airports though.”

Turning swiftly to the reason why we’re talking, The Flaming Lips bubble concerts, he says he’s thrilled that they’re giving everyone a lift.

“I get so involved that I don’t always realise people might think, ‘Oh my gosh, this is magic’. Sometimes I need to stand back.”

He accepts the “symbolic importance” of the gigs but stresses: “I always wait cautiously for what actually happens on the night. You don’t want to hear, ‘Oh somebody had a heart attack’. We’ve tried to think of everything that could possibly go wrong and accommodate any worries.”

Over two nights in January, the Lips performed songs like Race For The Prize and Do You Realize?? as well as tracks from the new American Head. Four more dates are planned next month. 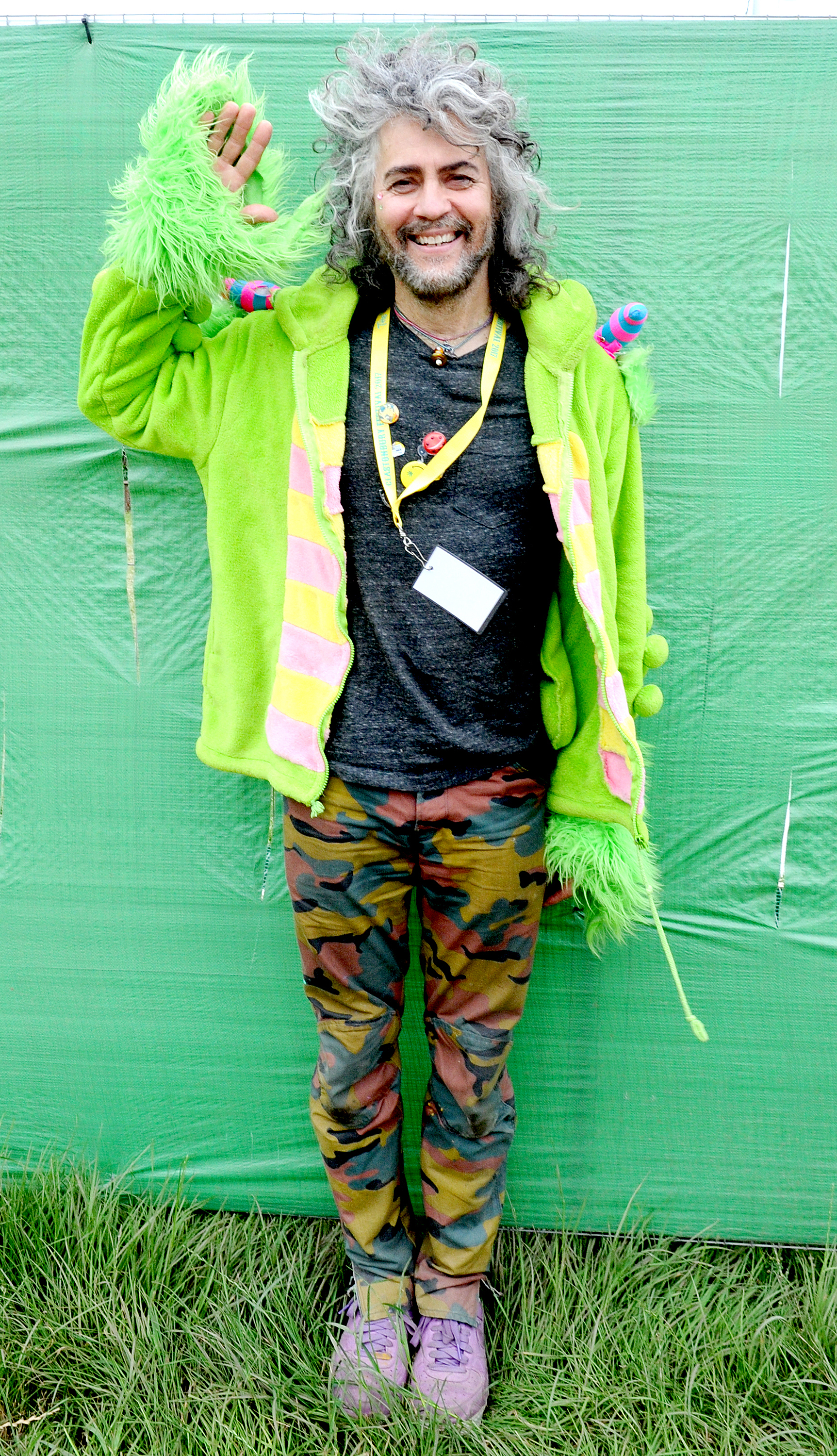 Coyne believes fatherhood has given him a sense of priority that had been missingCredit: Getty Images

The organisers have taken great care to keep everyone safe from the dreaded virus but, in a gesture of defiance, letter-shaped silver balloons can been seen floating above the band, spelling out the words “F*** off Covid”.

“We just thought it was appropriate,” says Coyne. “We’re going to attack this thing head on. There’s no point being polite about Covid. We know people whose grandparents and uncles have died from it.

“My wife Katy had it before Christmas, luckily not severely, but you can see how it can change the dynamic of a family.

“Because it can be really brutal and horrible, we in the band don’t take it lightly. I’m up there, I’ve got my mask on and everybody’s in a bubble.”

Coyne agrees with me that there’s a very un-Spinal Tap method in the madness.

“These Flaming Lips shows are safer than anywhere, once you leave the house,” he says. “I wish attendants were so attentive at the grocery store. If you show up without a mask, I don’t care if you bought a ticket, you have to leave. We’re very strict.” 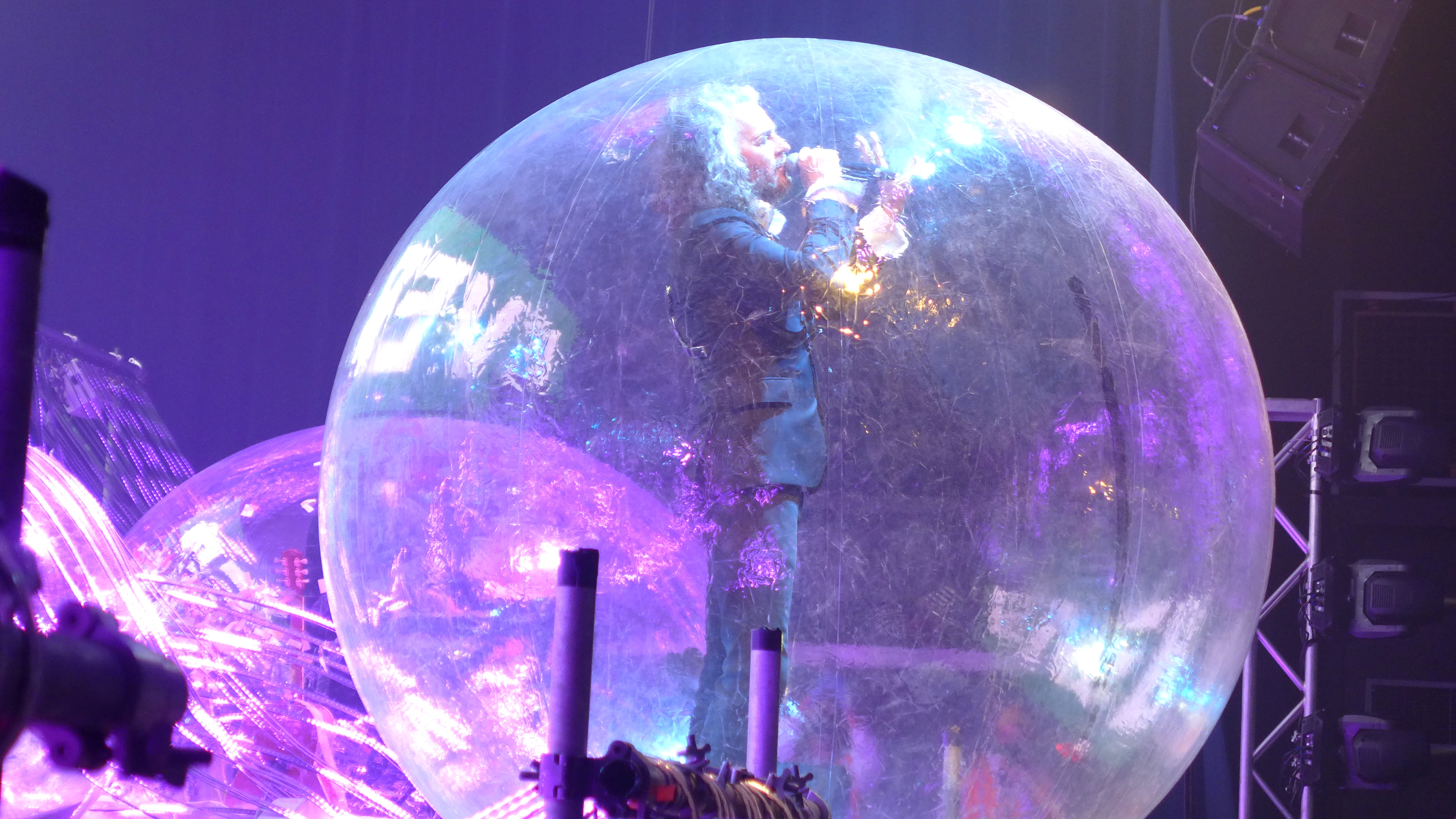 Coyne likes to sing in a giant inflatable bubble straight out of a Sixties sci-fi B-movieCredit: Reuters

The comedy returns, however, when Coyne enthuses about a power tool that most self-respecting Americans own, the leaf-blower, crucial to his space bubble ambitions.

“I don’t know what calibre of leaf blowing machine people are used to in England but in America, keeping your mown grass free of leaves is a full-time, manly job,” he explains with a knowing laugh.

“The space bubbles are pretty big and they’re packed pretty tight with air, so we had ten very powerful blowers. The good ones blow at 250 miles an hour. Each row of bubbles takes about 22 minutes. We are already on stage waiting for that last one to get blown up, so we can say, ‘OK, everybody’s in, we’re starting the show’.”

Big question . . . what if an audience member needs a loo break?

“We’re giving them these signs that say, ‘I have to pee’. The other side says, ‘It’s hot in here’. All the ushers are watching to make sure everybody’s OK.

“Knowing that if you have to pee, you can get out, alleviates a lot of stress about having to pee!”

And how did he source 100 of the 7ft spheres? “We scoured the internet to find some,” Coyne replies. “Even though I think I had more than anybody in the world at the time!

“On eBay, you think you’re buying them from someone living down the street but they’re just getting them from China,” he adds, noting the irony of bringing stuff from the country where coronavirus started. 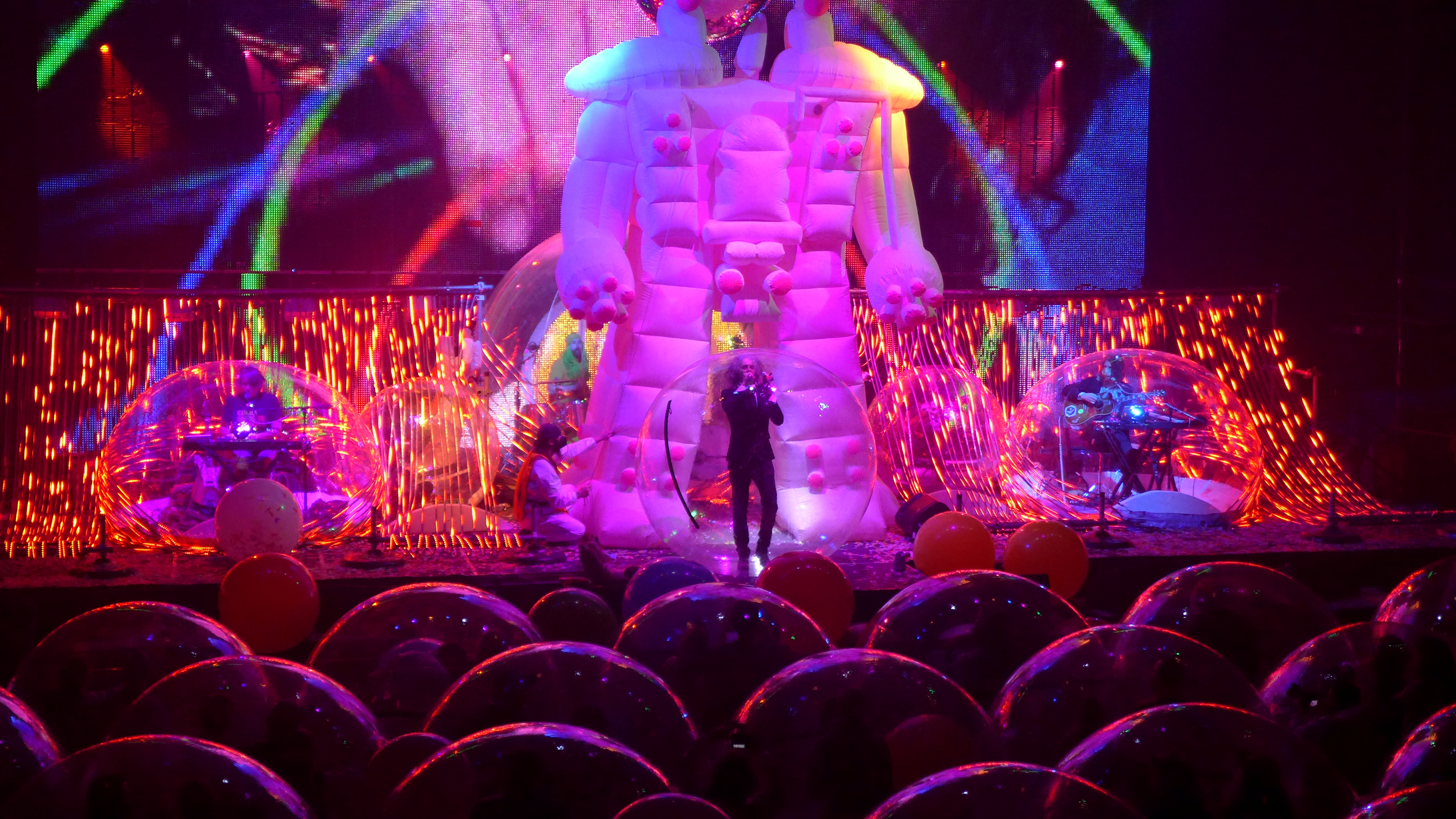 The Flaming Lips are staging a series of concerts in their home town of Oklahoma City with each band member in their own inflatable ‘space bubble’Credit: Reuters

“I also had some left over from videos — some had holes in them but we could patch them up  —  and, funnily enough, the Stephen Colbert Show had two. We had done the show back in 2012 when Colbert got into a bubble and so did I.”

If The Flaming Lips music can be ethereal, profound and emotional, the band’s stage shows have long been among the wackiest in the business, defined by animal costumes, psychedelic light shows and giant inflatables.

“So, we’re uniquely qualified to be doing this space bubble thing, even during the pandemic,” says Coyne.

As for his personal experience, he adds: “Luckily, I’m not claustrophobic. I’ve never really felt trapped in there, except maybe for the first time at Coachella.”

A painter at heart

Aside from planning the gigs and releasing the sublime American Head, Coyne has been fully occupied during lockdown in other ways. 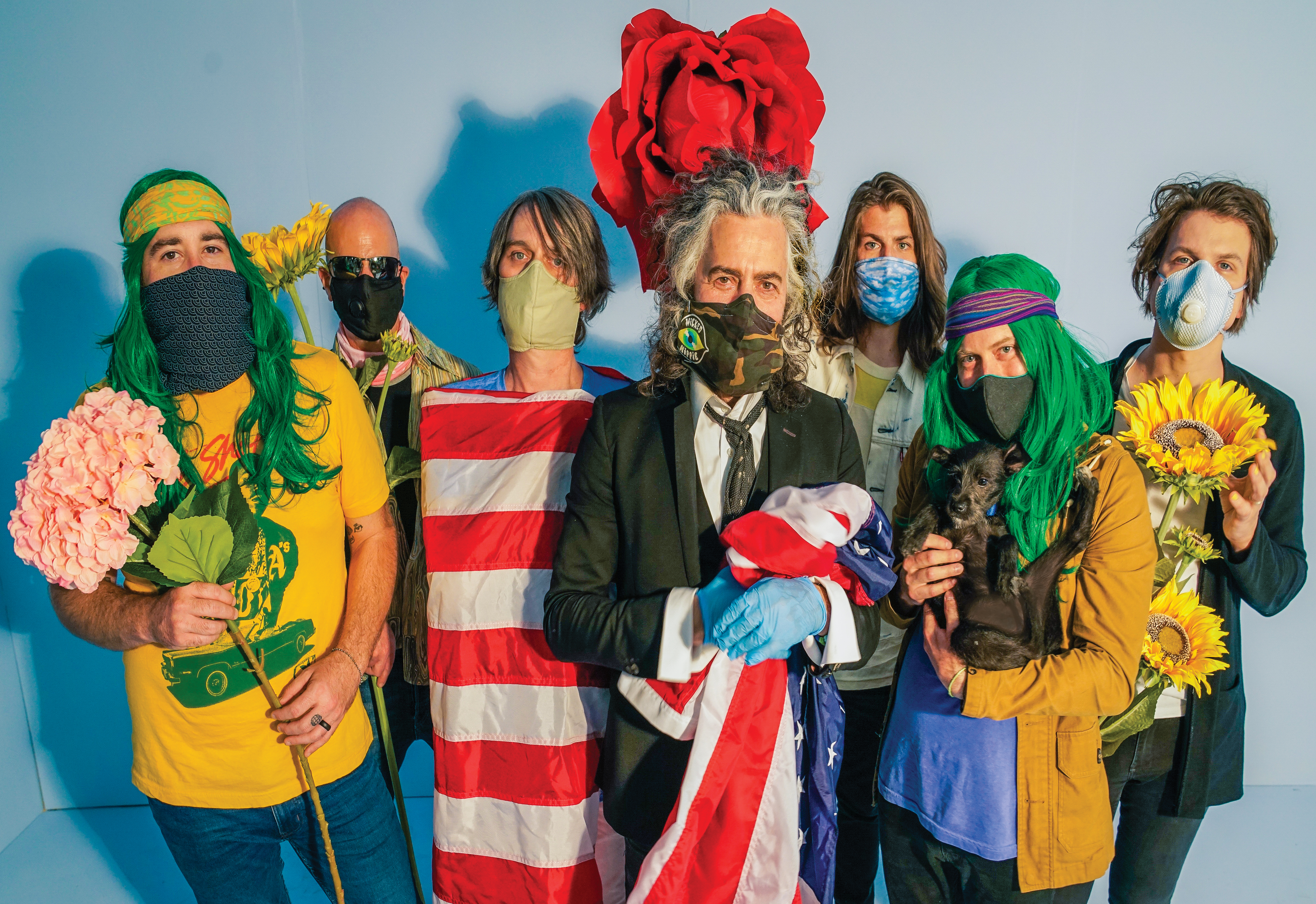 In June, 2019, his second wife Katy gave birth to their first child, a little boy they named Bloom Bobby Coyne.

He says: “I’m so lucky. I’m 60 so I can’t speak for the way someone in their twenties or thirties would feel, but he (Bloom) is just the greatest thing that could ever happen to me.

“He really is a beautiful, fun little entity, so wonderful, and his mother is the best there could ever be.”

Coyne believes fatherhood has given him a sense of priority that had been missing.

“Suddenly you can say this is important and this isn’t . . . and that has come at such a great time for me,” he affirms. 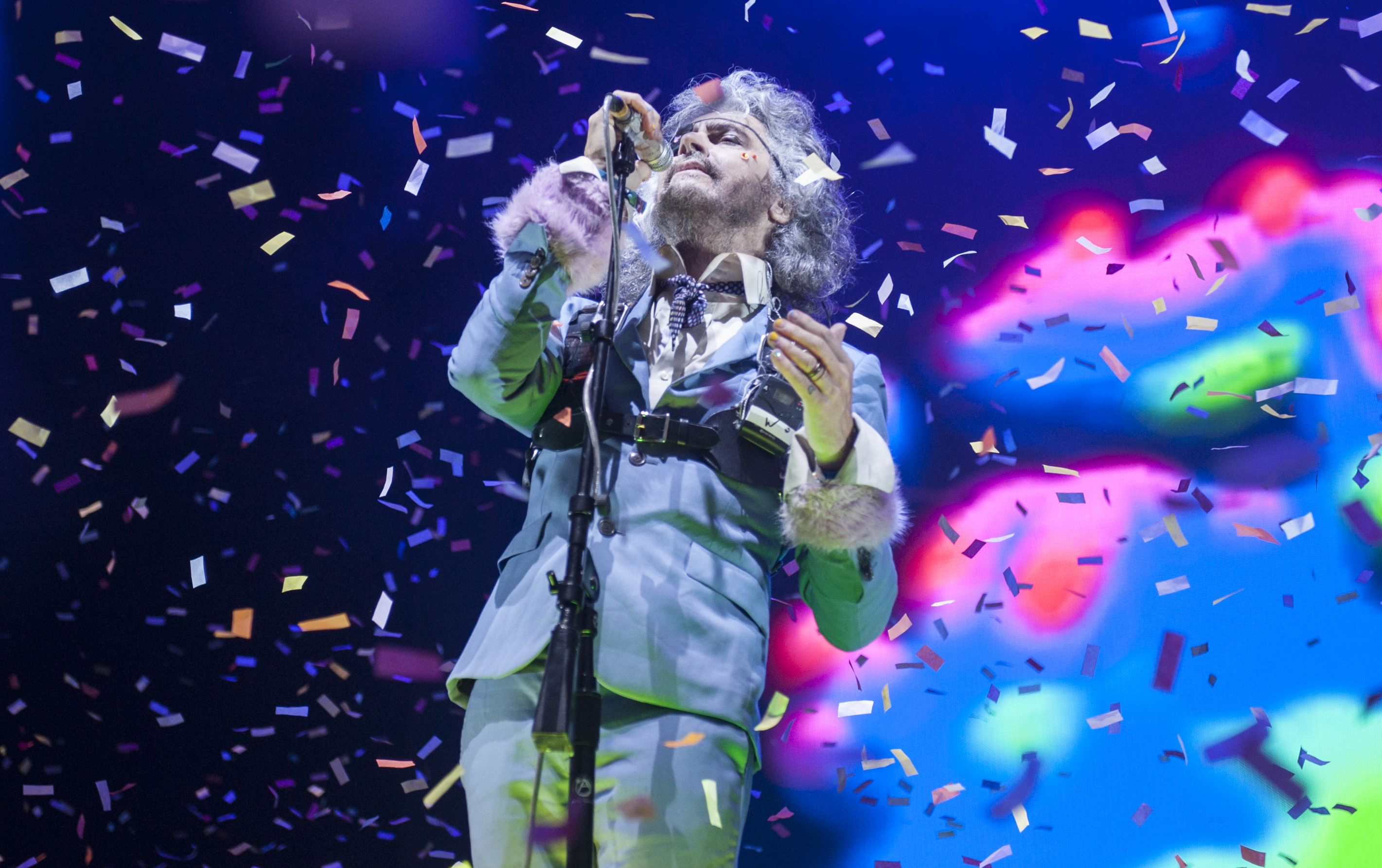 The Flaming Lips on day 1 of Bluedot Festival at Jodrell Bank – in a time before the need for ‘space bubbles’Credit: Getty – Contributor

He casts his mind back to when The Flaming Lips conceived their seminal opus, The Soft Bulletin, just before the turn of the millennium.

“Even back then, I had this desire to be normal. We’d spent a lot of our existence being freaks but I really wanted to know what ordinary people were going through.”

“There have been times in my life when I didn’t wake up until nine at night and be like, ‘Well that’s the way I’m living today’.”

Lockdown has also given Coyne the opportunity to do other home-based activities, not usually possible for rock bands who spend a lot of time on the road.

“At the very beginning of the pandemic, my wife and I were so relieved that no one was coming to our house,” he says. “We finally got to clean it up and do things we were trying to do for ten years.” 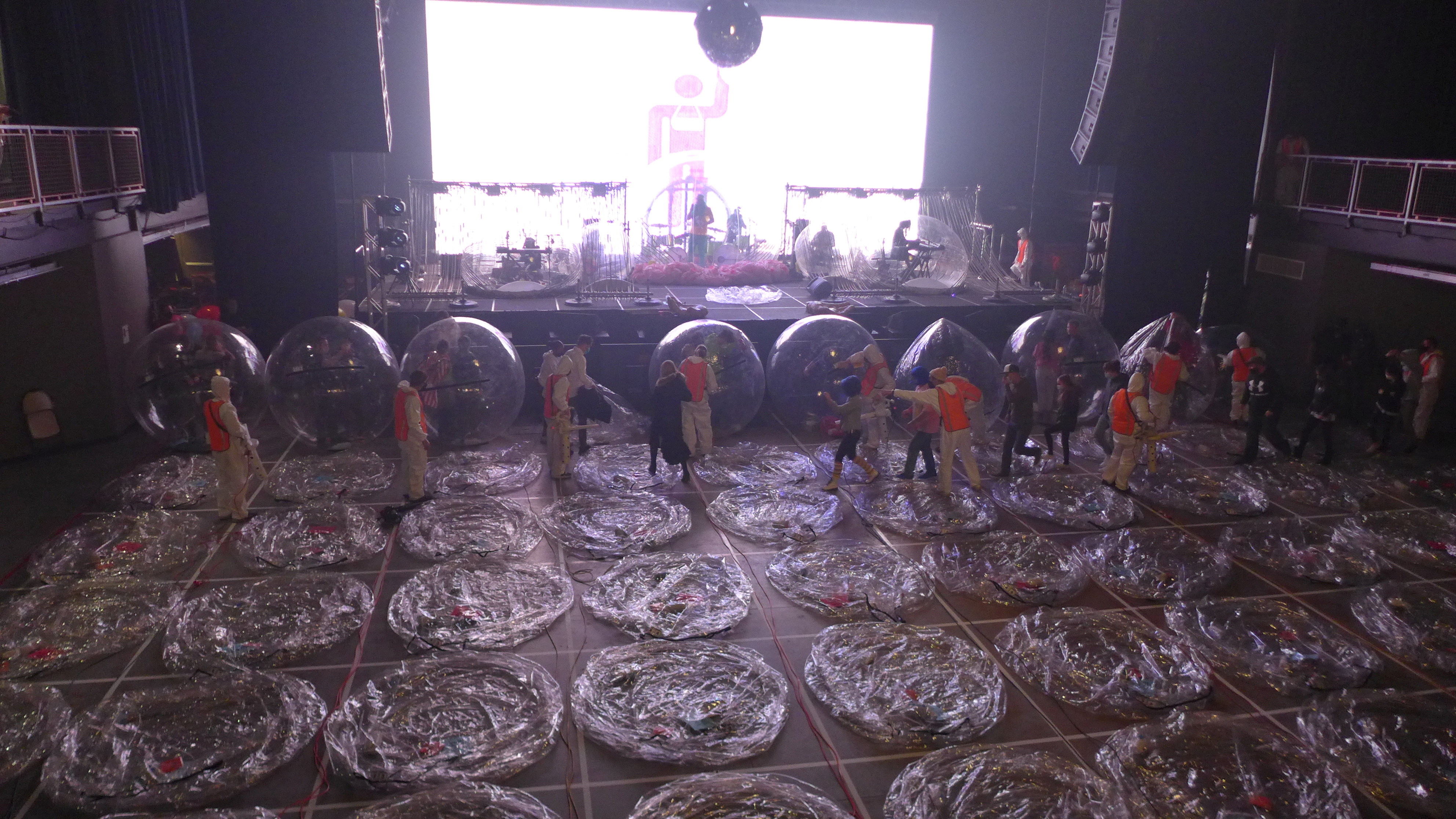 The audience comprises a further 100 bubbles, occupied by either one, two or three people, for a fully immersive yet responsible, socially distanced eventCredit: Reuters

They created a studio in the front room so he could explore his love of painting, even equipping it with a mini easel for his son to join in.

Anyone who has seen Coyne’s cover paintings for albums such as Yoshimi Battles The Pink Robots will appreciate the vivid colour palette and surreal, otherworldly style of his work.

“I think I’m probably a painter at heart and maybe I’m just using music to paint with as well,” he decides.

“Someone walks in at the end of your painting and says, ‘I can’t believe you painted that’ and I say, ‘If you’d been in my mind, you’d have believed I could!’ ”

Next we turn to the latest Flaming Lips musical brushstrokes, which resulted in last autumn’s American Head, an album evoking the rich melodic qualities and the thought-provoking lyrics of The Soft Bulletin and Yoshimi.

A telling example is Mother I’ve Taken LSD, of which Coyne says: “On the surface, it might sound like a freaky, funny druggy song.

“We’ve done plenty of those but it’s really about the exaggerated sadness you get when you’re young.

“For Steven, his brother committed suicide, and my young life was full of motorcycle accidents and my brothers being addicted to drugs.

“You can’t consciously know when you’re going to sing about those things.

“We were lucky that Dave (Fridmann) was in the same mind zone.”

Finally, before Coyne resumes his trip to Tulsa, he talks about America’s political landscape during one of its most turbulent periods. 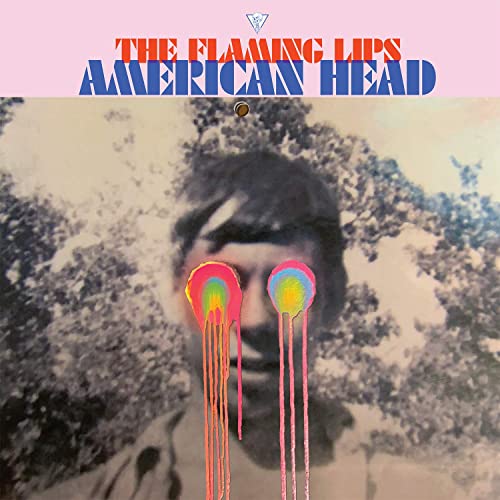 As with so many Stateside musicians, he’s hopeful of the Joe Biden era and he particularly yearns for an end to the culture of fake news that dominated Donald Trump’s presidency.

With typical imagination, he says: “I no longer want people to say aliens exist and they took JFK’s brain . . . ”

This from a man who likes to sing in a giant inflatable bubble straight out of a Sixties sci-fi B-movie.

Miley Cyrus is back making bangers