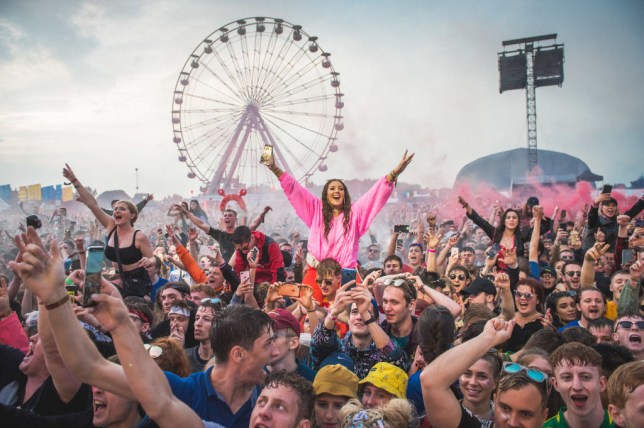 Parklife has ‘cancelled’ the tickets of a man who attempted to resell tickets he won for over double their value.

General admission tickets for the Manchester festival sold out in record time this morning after its all-star line-up was announced this week, with revellers queuing up to see Dave, Megan Thee Stallion, Da Baby, Disclosure and Skepta.

One person named Hamish was sitting pretty before the presale tickets even went on sale, having won a competition for Parklife tickets for himself and his ‘whole crew’ after impressing the festival’s official Twitter account with his group chat name, Turn the Heaton On.

However, he probably shouldn’t have tried to make money off the tickets, as a stunt to make over £1,000 from selling them massively backfired.

After Parklife announced that only day tickets remained after general admission weekend passes sold out, Hamish jumped in on the Twitter thread, tweeting: ‘3 weekend tickets for sale £350 each.’ 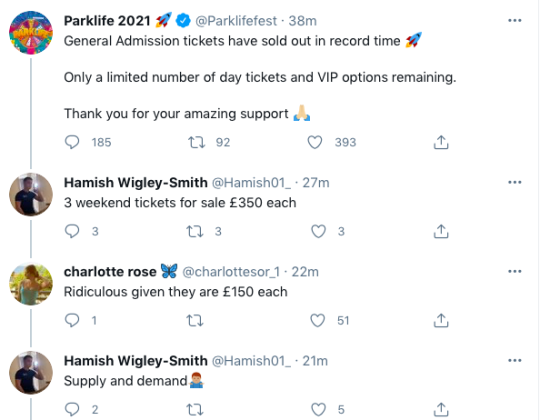 A woman named Charlotte hit out at him, replying: ‘Ridiculous given they are £150 each’ – with Hamish blaming ‘supply and demand’.

Charlotte tweeted: ‘Probably exactly the kind of person who bought about 8 just to sell them for double the price actual pig’ – with Hamish then explaining he hadn’t bought them at all.

He wrote: ‘Na I won tickets for me and my pals so why wouldn’t I sell them?’, and shared a screenshot of Parklife informing him he’d won the tickets for having the best group chat name.

Unfortunately, Parklife was tagged in the interaction, and a tweet from the account read: ‘Lol. Your tickets have just been cancelled pal.’ 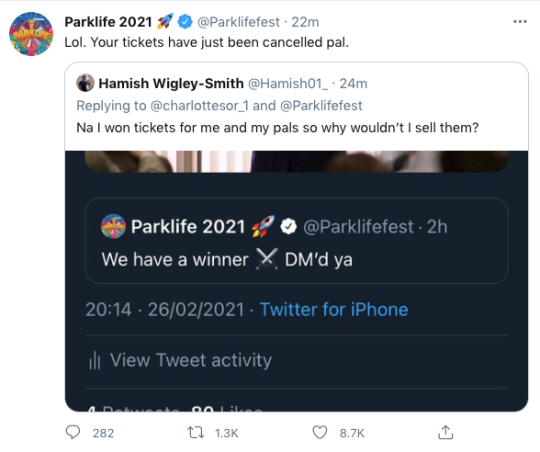 People praised Parklife for cracking down on potential touts, while others laughed at Hamish’s stunt backfiring, leaving him without any tickets.

Hamish tweeted: ‘Couldn’t write my life’, before adding: ‘I’d love to know what I was supposed to do with tickets I already had before I won the other ones, snowflakes of today have too many opinions.’

Parklife has previously called out touts on their website, writing: ‘We hate seeing customers turn up to the festival with fake tickets not being able to get in. We urge all customers to only buy from our official ticketing platforms mentioned above, the vast majority of tickets sold on secondary ticketing platforms & over Twitter or Facebook are fake.’

Those who missed out on this morning’s presale will another chance at Parklife tickets tomorrow, as general sale opens at 10am on Thursday.

On Saturday September 11, Dave, Megan Thee Stallion, Carl Cox, Young Thug, Kaytranada, Four Tet and Burna Boy are on the bill, while on the Sunday, Skepta, Disclosure, DaBaby, AJ Tracey, Eric Prydz and Jamie XX are among those who will entertain Heaton Park.

Parklife takes place from September 11 to 12 in Heaton Park, Manchester.