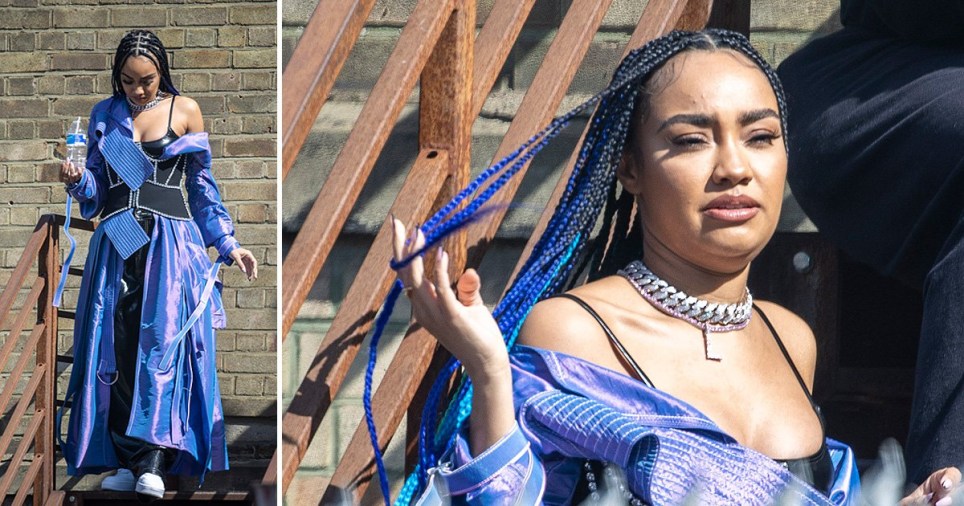 Leigh-Anne Pinnock grabs a break in between takes as Little Mix get to work on their new music video (Picture: Click News and Media)

Fans of the girl band might still be missing them as a four, but they can’t wait to see what Leigh-Anne Pinnock, Perrie Edwards and Jade Thirwall, who are carrying on as a trio, come up with next.

At a secret location in London, Leigh-Anne was seen grabbing a break in between takes as what is believed to be a club scene was being filmed.

The singer, wearing her hair in long braids, was dressed in a black, low cut corset dress with a metallic purple skirt that trailed to the ground, and shiny black trousers underneath.

She headed down a flight of stairs clutching a water bottle as she headed for some fresh air and chance to grab a breather, no doubt after pulling off an exhausting dance routine.

Dancers dressed in similar slinky outfits were also seen outside as they waited for shooting to resume. 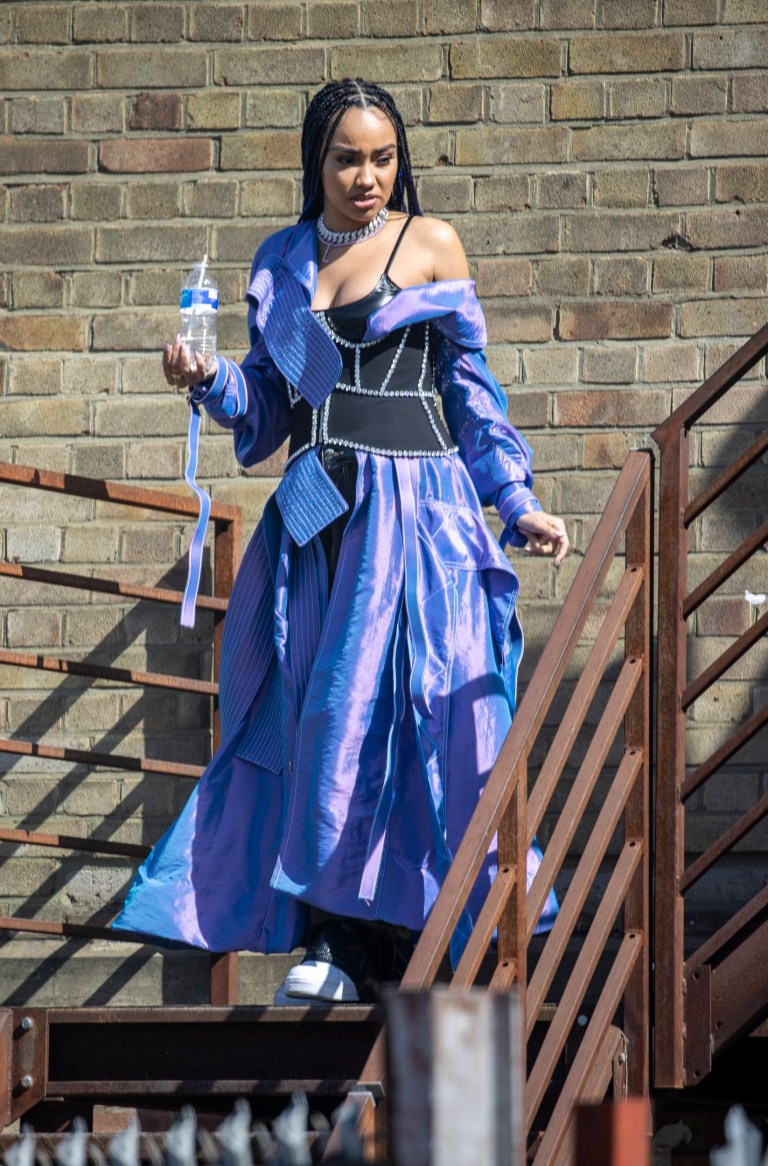 It will be their first Confetti video since Jesy Nelson quit the group (Picture: Click News and Media) 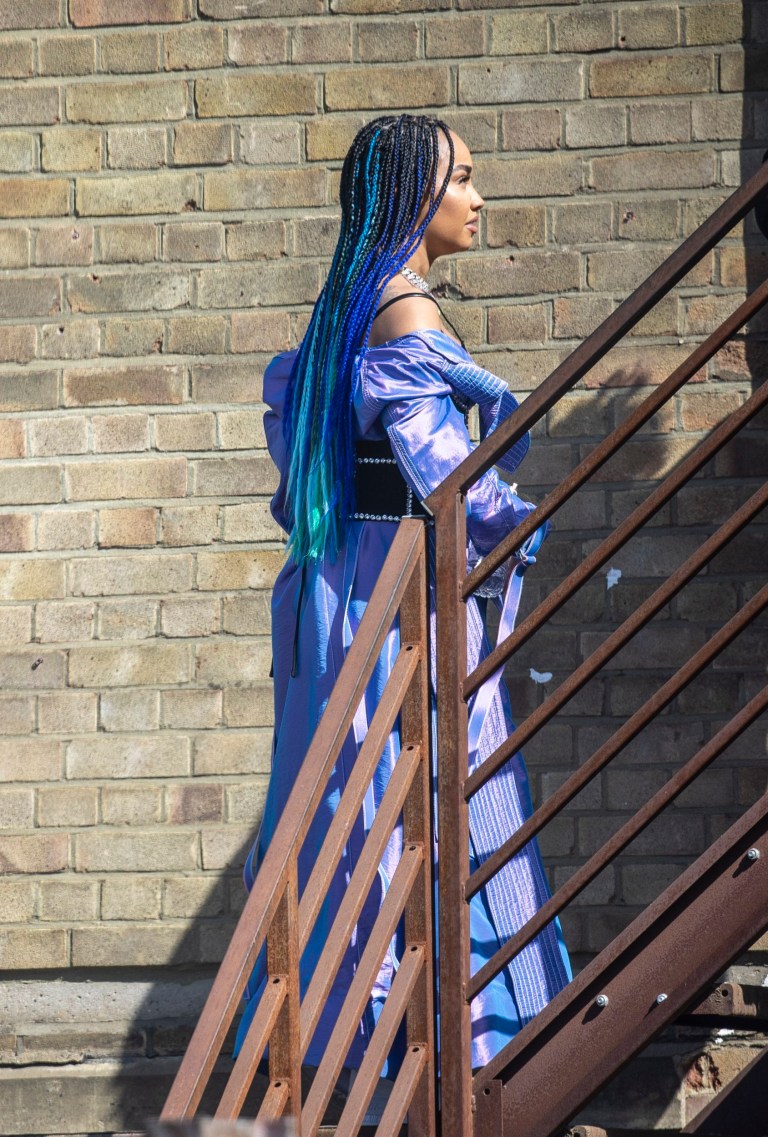 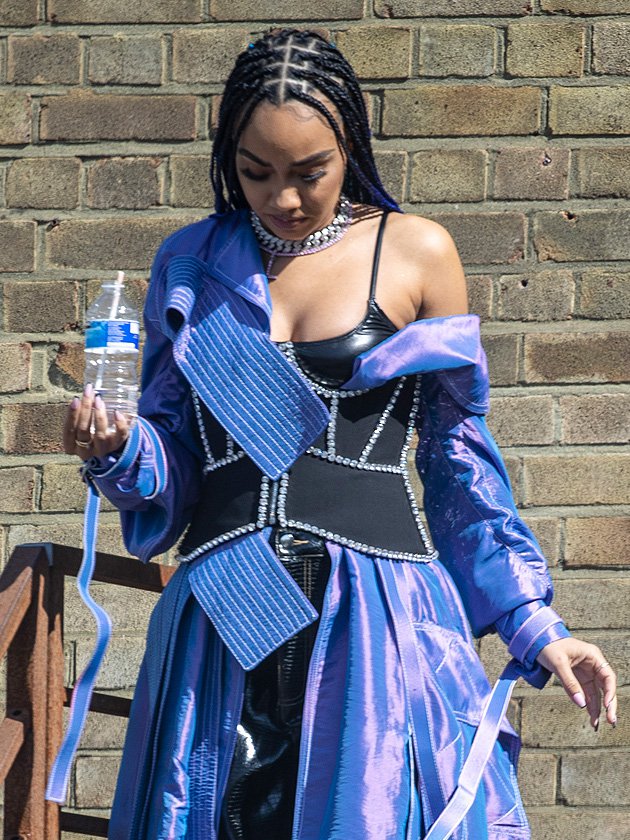 The dress was made up of a tight black corset and long metallic purple skirt (Picture: Click News and Media) 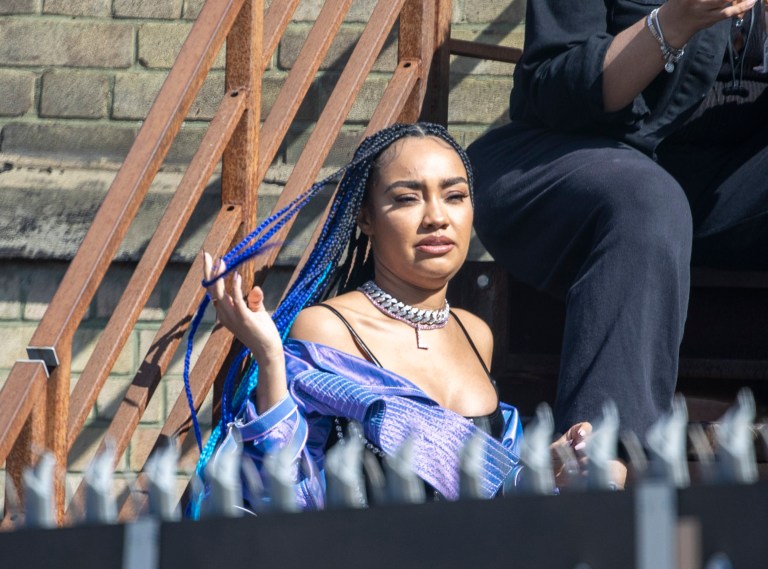 She had purple braids to match her dramatic outfit (Picture: Click News and Media) 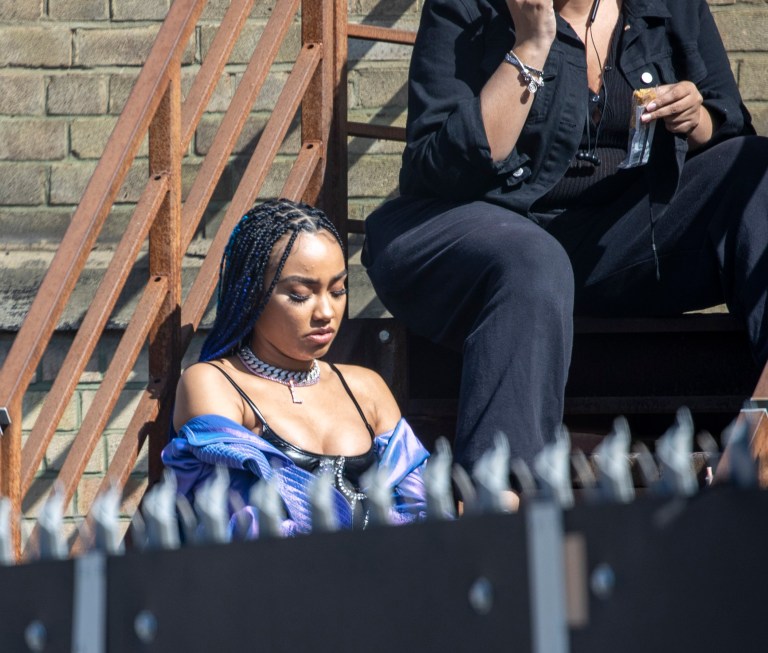 The singer sits down to take a break and get some fresh air (Picture: Click News and Media)

It will be the first music video since the release of their album Confetti to not feature Jesy, who has hinted at releasing solo music.

The new single will be a way for the X Factor winners to give back to their fans after the pandemic forced them to postpone their tour until 2022. 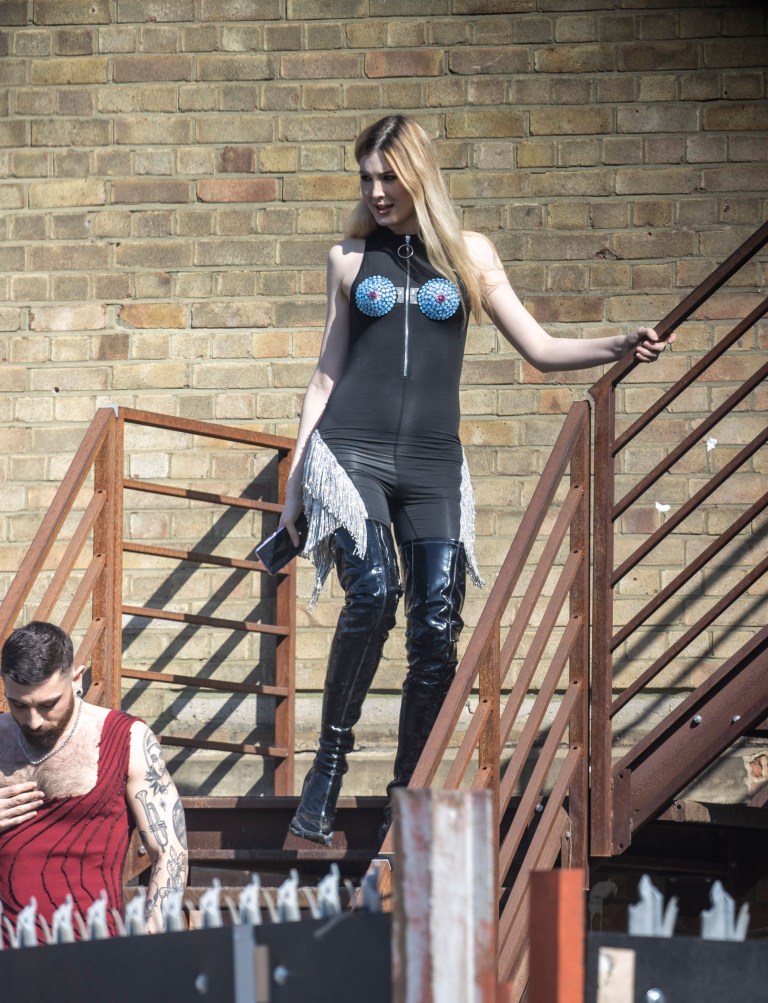 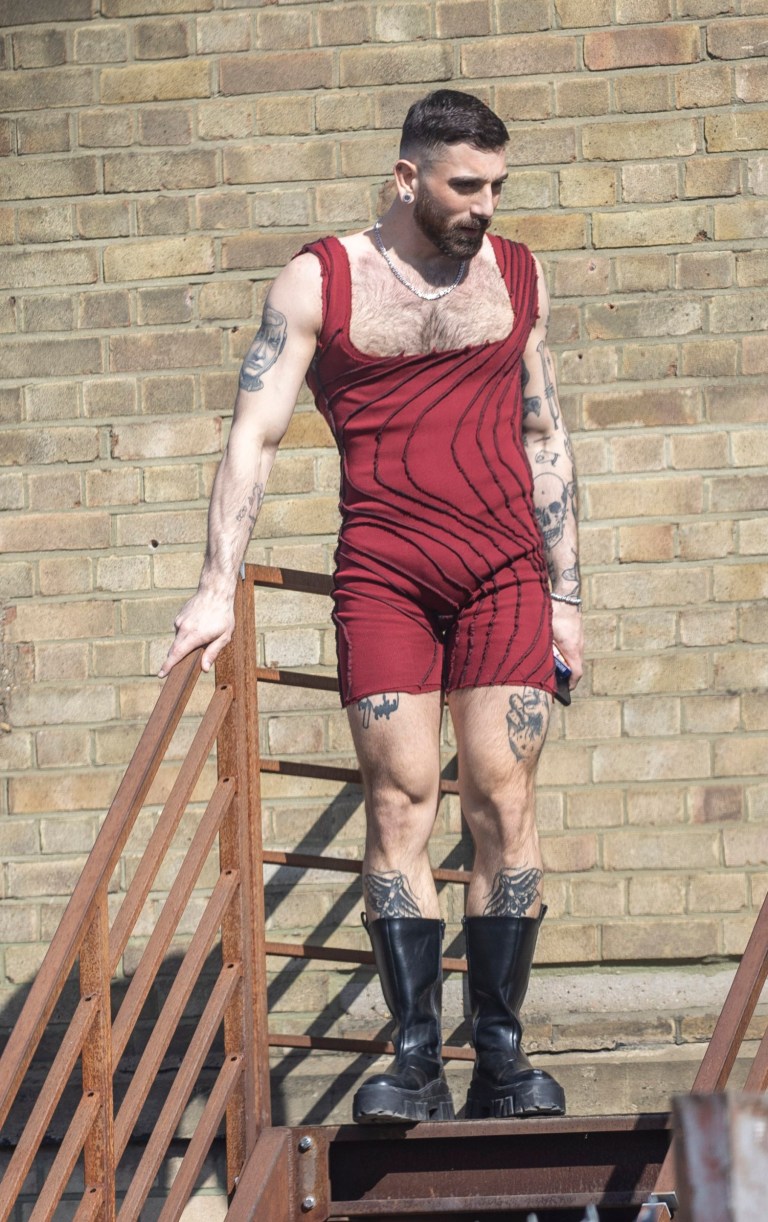 Luckily the weather in London has been nice recently (Picture: Click News and Media) 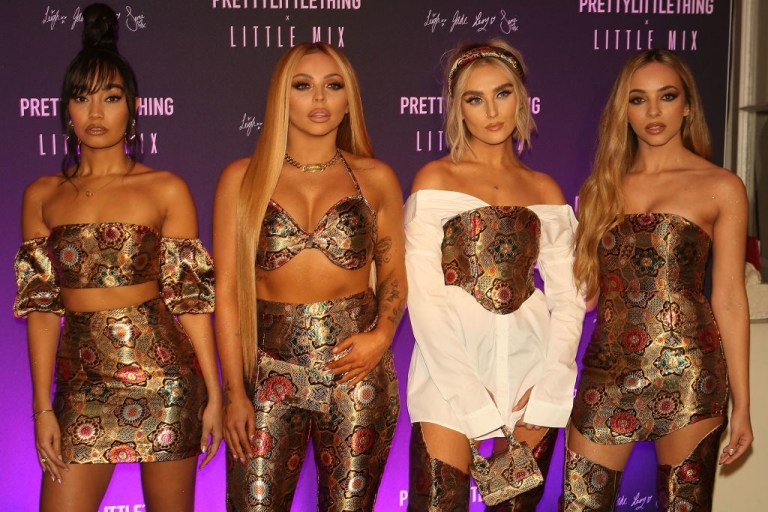 In a statement the trio said: ‘You know how much we love being on the road and performing every night for you all. However, due to the ongoing Coronavirus pandemic, we must prioritise the safety of our fans and crew and help to stop the spread.’

Throwing in an extra date for their fans in Cardiff, the Salute singers added: ‘We can’t wait to see you when it is safe to do so! Lots of love, the girls x’

Britney Spears Wrote Me a Letter Asking for Help