The video for Little Mix’s first single as a trio has dropped, as Jade Thirlwall, Leigh-Anne Pinnock and Perrie Edwards have re-recorded Confetti without departed bandmate Jesy Nelson, with a new verse added by rapper Saweetie.

If you didn’t miss getting hot and sweaty on the dancefloor before, you will now, as Little Mix strut into a dark room where people are throwing shapes.

Among them are Drag Race UK stars Bimini Bon Boulash, Tayce and A’Whora, who had us screaming at our phones when they were featured in the teaser dropped by the band last night.

A United Kingdolls and Little Mix crossover? What a concept.

In the video, A’Whora, who came fifth in the series, looks as fashion forward as ever in a neon green corset and elbow-length gloves, with top three queen Tayce is serving us a mullet and a look created from white vinyl.

The queens remark on the cheek, nerve, audacity, gall and gumption of someone spilling a drink on them, before Bimini, dressed in all red, arrives to clear up the situation. 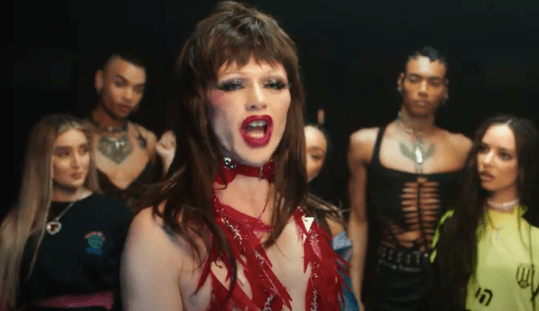 The Drag Race UK queens are in high demand for the charts right now, with finalist Bimini Bon Boulash starring in the video for Majestic x Boney M’s smash Rasputin.

Tayce, A’Whora, Bimini and series two winner Lawrence Chaney even hit the charts themselves as the United Kingdolls, with their version of earworm UK Hun cracking the top 30.

Little Mix have been known to champion drag and the LGBTQ+ community in their videos in the past, with Drag Race US queens Alaska, Courtney Act and Willam performing alongside Jade in the 2017 video for Power.

Jade also appeared as a judge on series one of Drag Race UK in 2019, with the bottom two queens lip syncing to Power in the lip sync for their lives. 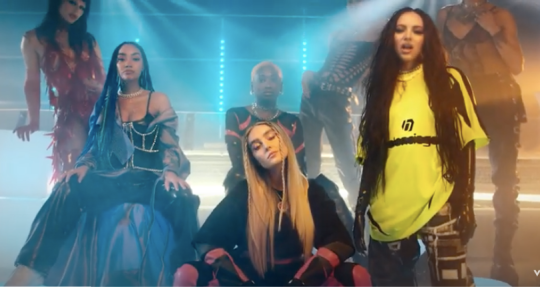 Little Mix are continuing as a trio (Picture: YouTube) 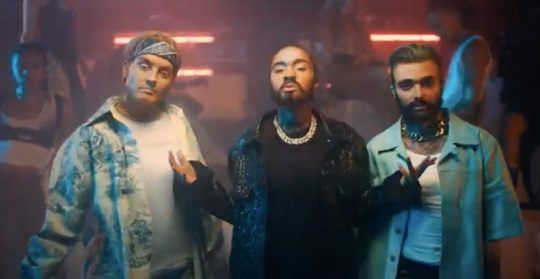 And the girls have turned into drag kings for Confetti, as the video features Jade, Perrie and Leigh-Anne not only as their usual femme selves, but also serving us their male alter egos.

Jade, Perrie and Leigh-Anne face off against J-Dog, Lenny and Pez in a dance-off, before they rate each other’s fitness while chatting in their respective toilets.

Confetti was included on Little Mix’s sixth album of the same name, released last year, but this single marks their first release as a three-piece after Jesy quit the band in December after nine years.

‘It’s just learning to adapt. I think it’s quite exciting.’

She added that they ‘got off to a good start’ as their last single as a quartet Sweet Melody hit number one after Jesy left, saying: ‘That was like, “Oh wow, this is a good sign, good omen, that this year is going to be good for us.”’

Confetti ft Saweetie is out now.