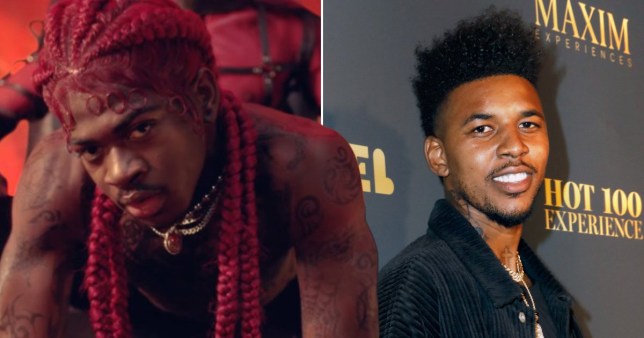 Lil Nas X served the most classy clap back to Nick Young who said his children were banned from listening to Old Town Road after the rapper released his controversial music video for Montero (Call Me By Your Name).

The 21-year-old rapper has received praise for the unapologetically queer visuals, which sees him pole-dancing in hell and giving the devil a lapdance.

However, the video has also garnered criticism over the religious imagery.

It appears NBA star Nick falls into the latter category and wasn’t impressed by the visuals as he tweeted on Sunday: ‘My kids will never play Old Town road again.. I’m still debating about wearing

@Nike after this come nike a drop of blood for real.’

Their classic Air Max ’97’s have been revamped and will be available in a limited edition stock of 666 pairs, each individually numbered “x/666” in red embroidery. The shoes will also contain 66 CCs of red ink in addition to one drop of human blood.

The trainers feature the Bible scripture Luke 10:18 on the side – a passage which references Satan’s banishment from heaven.

In response to Nick’s tweet, Lil Nas X replied: ‘They shouldn’t be playing old town road anyway, we streaming call me by your name now.’

Lil Nas X preempted the backlash and wrote a letter to his 14-year-old self explaining his reasons for living in his truth.

‘You see this is very scary for me, people will be angry, they will say I’m pushing an agenda. But the truth is, I am. The agenda to make people stay the f*** out of people’s lives and stop dictating who they should be.

‘Sending you love from the future.’

Lil Nas X shot to fame in 2019 with his track Old Town Road, which spent 19 weeks at number one on the Billboard Hot 100 chart thanks to Billy Ray Cyrus’ remix.

In June 2019, while at number one, Lil Nas X came out publicly as gay, later joking that he thought he ‘made it obvious’.