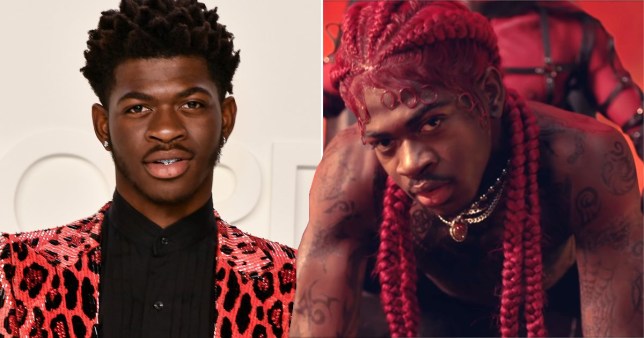 Lil Nas X has rubbished rumours that he is pretending to be gay to sell records following the monster success of his latest single Montero (Call Me By Your Name).

The 22-year-old rapper came out as gay in 2019 and has continued to own his sexuality ever since, notably in the music video for his new single Montero, which sees him unapologetically embracing his queer identity.

Montero reached number one in the UK and on the US Billboard Hot 100, joining the worldwide chart-topping success of his debut single Old Town Road.

However, the queer nature of Montero and its subsequent popularity has led some critics to speculate whether Lil Nas X has been pretending to be gay to reach the LGBTQ+ market.

Addressing the rumours, the rapper tweeted: ‘Y’all love saying i’m being gay for success but can’t name 5 successful gay male artists in the last 10 years to save your life.

‘It’s a million n****s in the industry that make nothing but songs about women and y’all don’t complain. but i make my first song about a n***a and now it’s my entire artistry.

When the Montero music video dropped, viewers were shocked to see the rapper pole-dancing in hell, being shackled by captors in Regency-era wings and giving the devil a lapdance.

However, others loved the non-apologetic video which also saw the musician don a series of candy-coloured wigs and skintight costumes.

So when the track went to number one in the US, the rapper of course seized the opportunity to hit back at his haters.

‘Y’all told a 19 year old who had just escaped the lowest point of his life that he would never have a hit again. you told him to stop while he’s ahead,’ he tweeted earlier this month.

‘He could’ve gave up. but 4 multi platinum songs and 2 #1’s later, he’s still here. thank you to my team and my fans! Ily… I hope my haters are sad. I hope they are crying. I want your tears to fill my grammy cup [sic],’ he added.

The impact of Montero has reached far and wide and, in some unexpected places, with the song topping the charts in Saudi Arabia – where gay sex is illegal.