Lana Del Rey has elaborated on the cover art of her forthcoming album ‘Chemtrails Over The Country Club’, appearing to pre-emptively respond to criticism about the diversity of the group of people it depicts.

The singer unveiled the artwork and the tracklist for the record late Sunday night (January 10). It features Del Rey and a number of other women gathered around a table smiling.

She also left an Instagram comment elaborating on the cover art, starting the message, “I also want to say that with everything going on this year! And no this was not intended-these are my best friends, since you are asking today.

“And damn! As it happens when it comes to my amazing friends and this cover yes there are people of color on this records picture and that’s all I’ll say about that,” Del Rey added.

Some of the people on the cover, she wrote, were “Valerie from Del Rio Mexico, my dearest friend Alex and my gorgeous friend Dakota Rain as well as my sweetheart Tatiana”.

“We are all a beautiful mix of everything- some more than others which is visible and celebrated in everything I do. In 11 years working I have always been extremely inclusive without even trying to.”

She continued, writing that “My best friends are rappers my boyfriends have been rappers.”

“My dearest friends have been from all over the place, so before you make comments again about a WOC/POC issue, I’m not the one storming the capital, I’m literally changing the world by putting my life and thoughts and love out there on the table 24 seven. Respect it.”

It is not clear who made the criticism Del Rey was responding to, or whether the statement was entirely pre-emptive.

Read Del Rey’s comment on the cover art in full below: 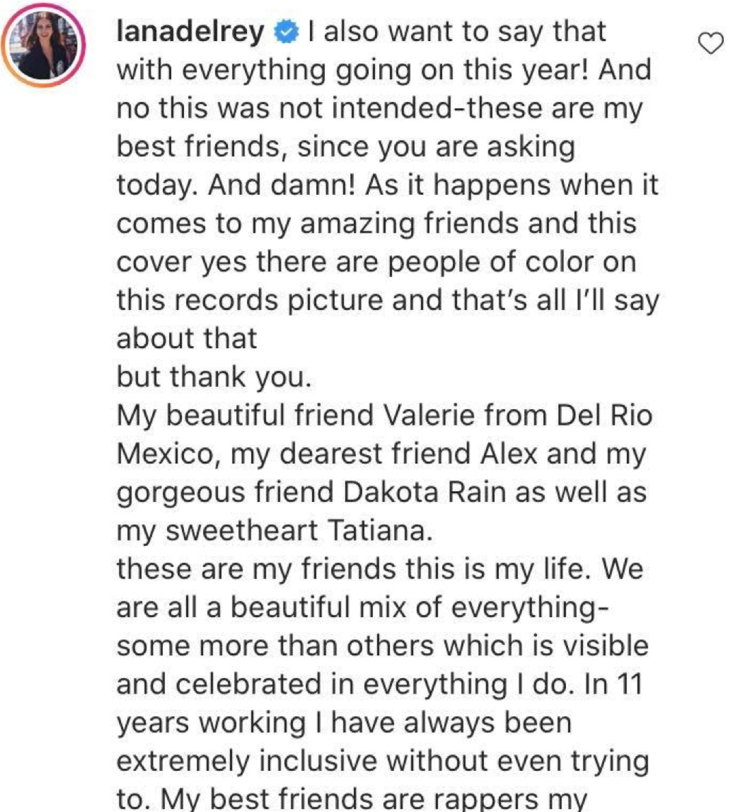 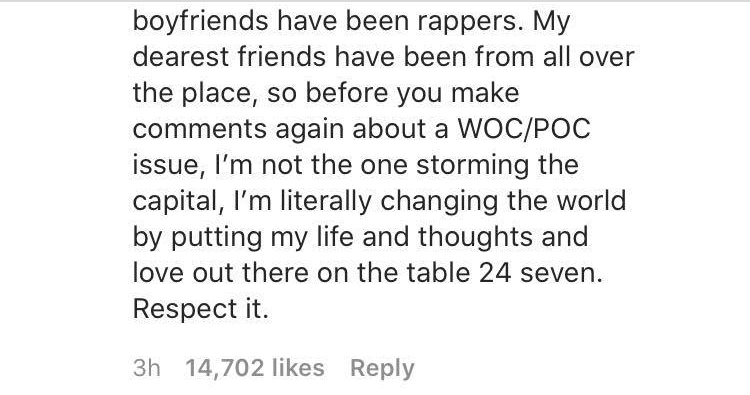 Last May, Del Rey drew criticism for an Instagram post she made in which she hit back at claims she was “glamorising abuse” with her music. In her post, she named a number of female artists in pop and hip-hop – including Doja Cat, Ariana Grande, Camila Cabello, Cardi B, Kehlani, Nicki Minaj and Beyoncé – whom, she wrote, “have had number ones with songs about being sexy, wearing no clothes, fucking, cheating, etc”.

She added, “With all of the topics women are finally allowed to explore I just want to say over the last ten years I think it’s pathetic that my minor lyrical exploration detailing my sometimes submissive or passive roles in my relationships has often made people say I’ve set women back hundreds of years.”

She later denied that her post was an attack on the artists she named, most of whom are women of colour, calling out “flip-flopping headline grabbing critics [who] can’t read and want to make it a race war” and claiming that the singers she mentioned were some of her favourite artists. She also posted a video message, in which she discussed “the need for fragility in the feminist movement” and further addressed claims that her post was racist.

“I’m not the enemy, and I’m definitely not racist, so don’t get it twisted. Nobody gets to tell your story except for you, and that’s what I’m gonna do in the next couple of books. So god bless, and, yeah, fuck off if you don’t like the post,” she said.

The tracklist for ‘Chemtrails Over The Country Club’ is 11 songs long, featuring the previously released lead single ‘Let Me Love You Like A Woman’. Find it below:

The ‘Chemtrails Over The Country Club’ track list is:

Of ‘Let Me Love You Like A Woman’, NME‘s Rhian Daly wrote that the song could be “a classic between-albums palette cleanser that, in the context of the new record, will continue her journey to ever more distant plains.”

While the exact release date for the follow up to ‘Norman Fucking Rockwell!’ is yet unknown, the album is set to be available for pre-order today (January 11) alongside the release of the video for the album’s title track.

Alongside the lead-up to the new album, Del Rey has shared a slew of covers, including classics ‘On Eagle’s Wings‘ and ‘You’ll Never Walk Alone‘, as well as George Gershwin’s ‘Summertime‘.

She had previously teased an entire album comprised of “American standards and classics” that is yet to be released.

Laura Hamilton shows off her phenomenal figure in sexy corset