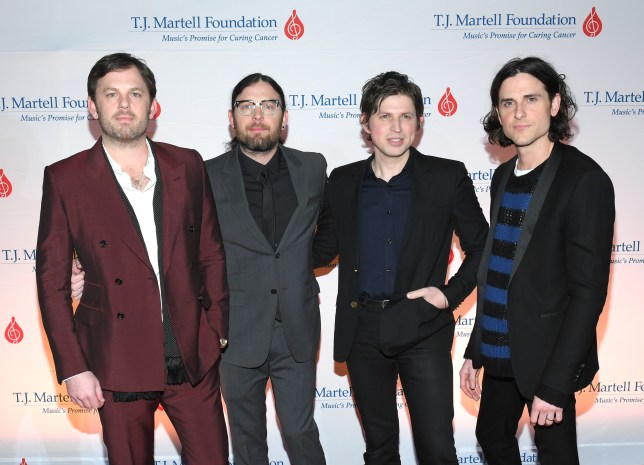 Kings of Leon have latched onto the future music with their new album (Picture: Getty Images)

Kings of Leon have become the first band in the world to release their new album as a non-fungible token (NFT), a seemingly progressive move but is it actually good for the music industry and fans?

The Sex On Fire hitmakers, consisting of Caleb, Jared, Matthew and Nathan Followill, released their brand new album When You See Yourself on Friday to usual streaming services such as Spotify and Apple Music.

However, fans who are particularly clued-up on the latest technology might have been looking to purchase via an NFT.

Yep, we hear you screaming, what’s an NFT?

An NFT is a type of cryptocurrency that can hold assets such as artwork and concert tickets rather than money. To get an idea of just how valuable NFTs can be, musician Grimes earned $5.8 million (£4 million) in 20 minutes selling her artwork digitally.

Those with tokens for Kings of Leon’s new album would be able to unlock exclusive content such as limited-edition vinyl and even front-row seats at future concerts if we’re ever allowed back into society again.

Exclusive content has long been a source of division within the music industry as some fans may feel excluded.

However, with the popularity and value of NFTs seemingly soaring at the moment, they could become an asset to the future of the music business.

Anthony Hamer-Hodges, Programme Leader – Music Business Management at London College of Creative Media (LCCM), told Metro.co.uk: ‘The current hype around NFTs is interesting as it demonstrates these essential economic principles of scarcity, value, supply and demand whilst simultaneously being much harder to pin down.’

A little sceptical about it all, Hamer-Hodges added: ‘What is actually being exchanged if the album is subsequently available later to other fans?

‘Exclusivity in music has never made much sense as most artists want their art and music to be appreciated by the widest audience possible.’

In this case, Kings of Leon’s album is still widely available on most streaming platforms in addition to the crypto version so fans shouldn’t really miss out.

However, on the chance an artist does decide to offer songs exclusively through the purchase of an NFT, Hamer-Hodges said: ‘Even if one committed and very rich fan was willing to finance the whole endeavour, a modern variation of royal patronage, it wouldn’t make for a thrilling gig experience when the rest of the audience don’t know the words to sing along.’

The professor continued: ‘We hear about digital art pieces, tweets or music being released as NFTs for several million dollars, but these are arbitrary valuations based on a non-existent peg of a cryptocurrency to our more familiar fiat currencies unless the artists actually sell out into dollars.

‘This is notoriously hard to do whilst earning the various exchanges and brokers involved large chunks of the resulting transactions.

‘All this is before we even mention the huge electricity and environmental impact that each Blockchain transaction entails.’

Stephen Duval, CEO at Empowerment IP, sees the positives of selling as an NFT.

He explained: ‘It’s an opportunity for creators to add value to their portfolio by producing hyper-unique, and therefore highly valuable, content to the market, which bolsters their Intellectual property.

‘Adding value to the concept that artists and/or creators can blur the lines between music and content to generate income, especially in this temporary lull in touring, by using innovative and powerful solutions.’

However, Hamer-Hodges offered a warning to artists who may be thinking of rushing to cash in, urging them to question whether their music is worth the hassle of an NFT in the first place.

‘Whilst artificial scarcity can be created by NFTs, I would caution musicians against embracing this area too enthusiastically unless they discover that in the end it is their music that is fungible and outside of a few rich patrons, the world can live without,’ he stated.