“WHEN a band has to prove themselves it’s really exciting and I like being in that position,” says Kasabian leadman Serge Pizzorno.

“I’ve always liked being the underdog — I’ve written a lot of songs about it — and this was where Kasabian found themselves.

Serge Pizzorno, 41, in foreground, stepped up as Kasabian frontman in July 2020 after singer Tom Meighan was fired for assaulting his now-wife Vikki Ager.Credit: NEIL BEDFORD 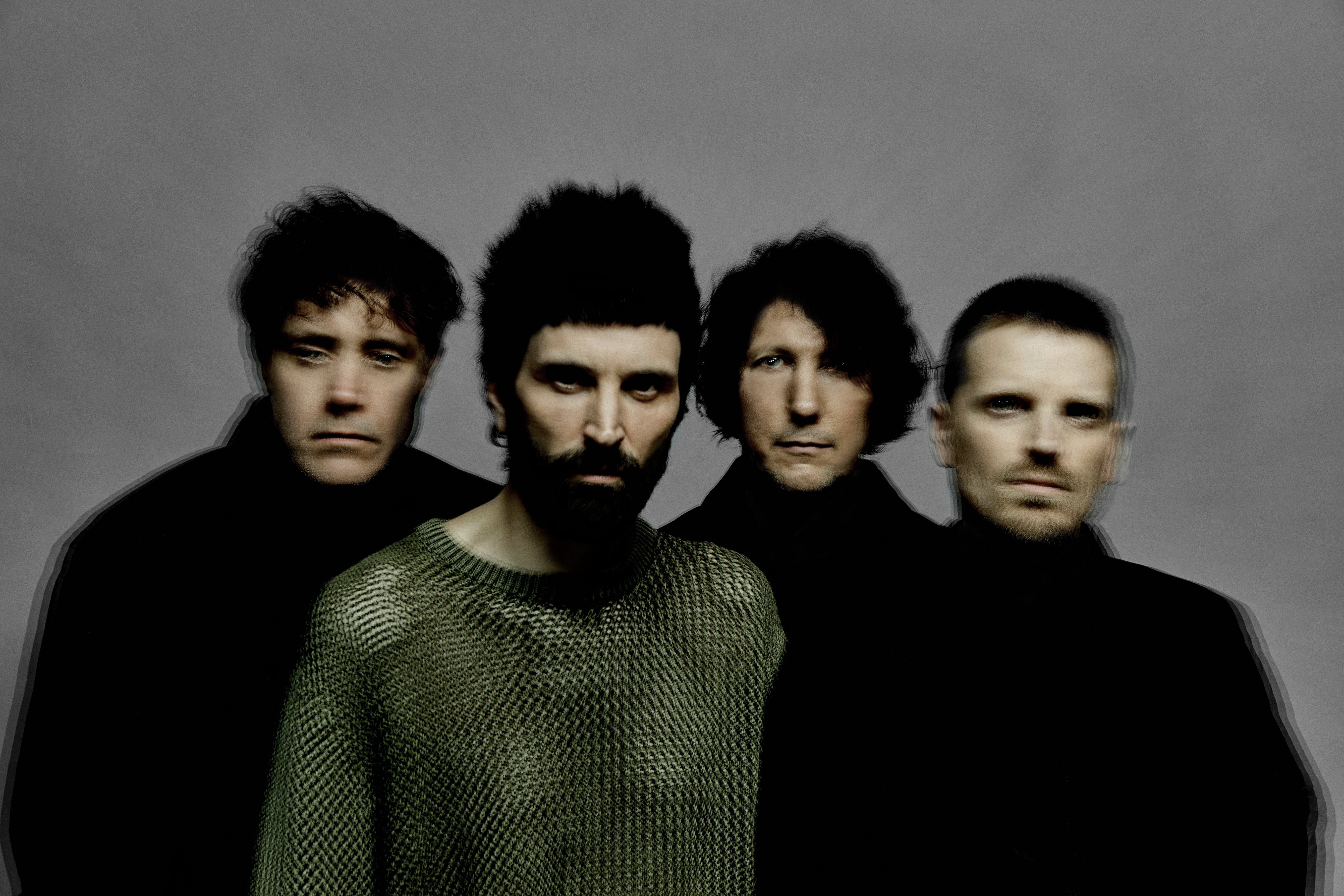 The band’s new album, The Alchemist’s Euphoria will be the first since Pizzorno Meighan’s departureCredit: NEIL BEDFORD 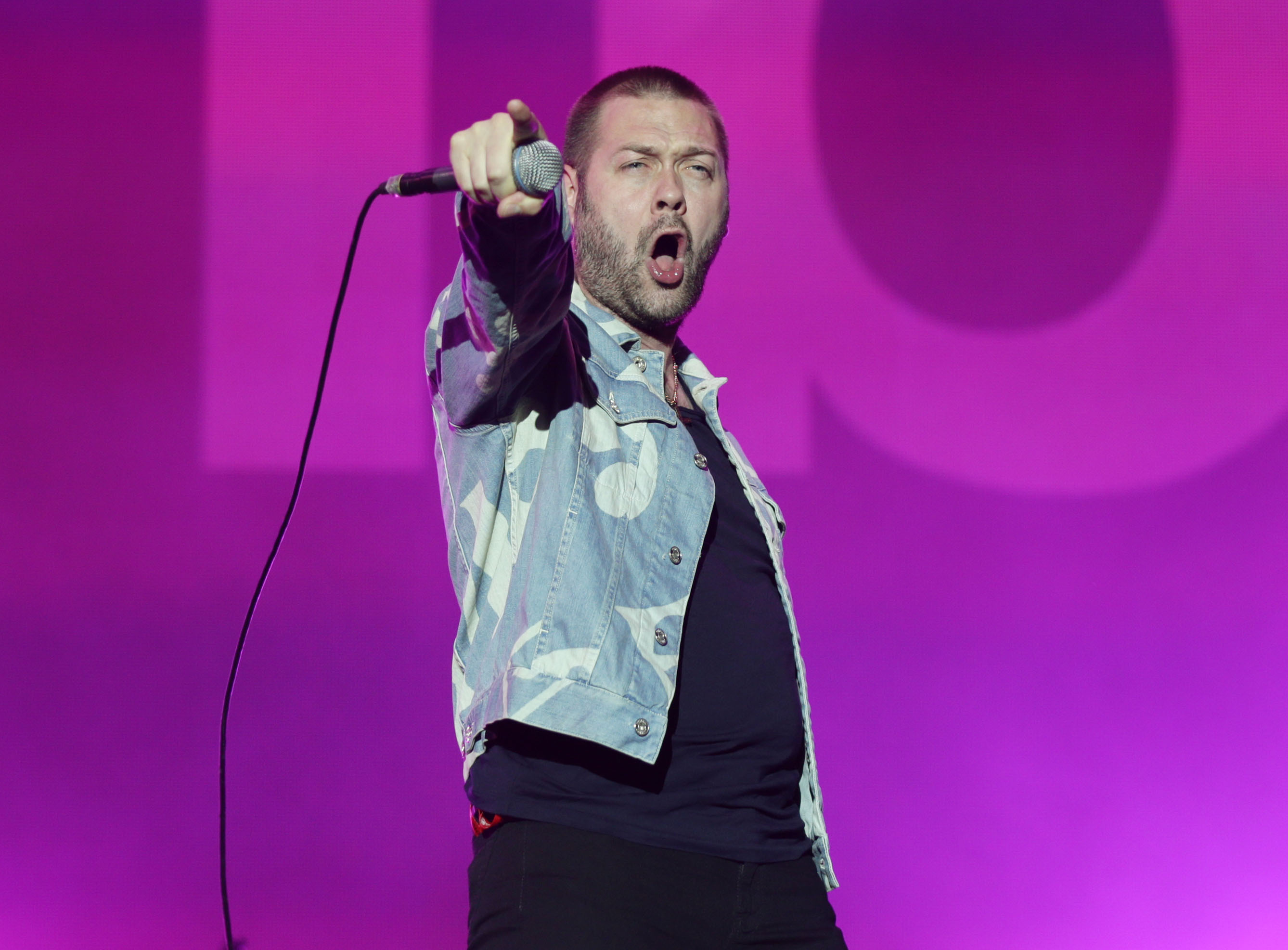 “We knew what was riding on it and we deserved our shot. The ‘new’ shows we’ve played have been really special and this album has given us a lot of confidence.”

Pizzorno is upbeat with lots to say as we chat about their seventh album The Alchemist’s Euphoria, the first without original singer Tom Meighan.

I’m sitting with the musician in his publicist’s office discussing what has been an emotional two years for the Leicester band.

Pizzorno, 41, stepped up as frontman in July 2020 after singer Tom Meighan was fired for assaulting his now-wife Vikki Ager. 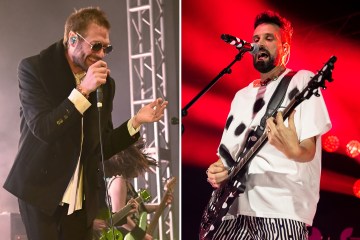 Meighan pleaded guilty and was sentenced to 200 hours of community service but, domestic abuse charities criticised the order as insufficient after it was revealed in court Meighan had repeatedly struck Ager, held her by the throat and dragged her by the ankles.

However, fans were divided over the decision to sack Meighan over the incident and many fans voiced their views on social media that he should be given a second chance. “I was aware of the chatter,” says Pizzorno.

“But no one knows what happened except us. To me the band is a sacred thing and we made the decision as a band that everything stays within the band. Tit for tat? I’m not going there.

“Playing shows or making albums was the only way for me. I do my talking at gigs or on the record.”

The future for Kasabian had been bleak. For 17 years the band were one of Britain’s biggest groups but Pizzorno, bassist Chris Edwards and drummer Ian Matthews didn’t know what came next.

The songwriter admits he thought about a new frontman, but they kept coming back to the fact these were HIS songs.

“Those words are in my blood,” he tells me. “I know where I was when I wrote every one of those songs. That counts for something on stage when the words come from within. So, I had to stand up and I had to step up. I had no choice really.”

Pizzorno says his decision to carry on and become the band’s singer was supported by his friends and family.

He says: “To park Kasabian’s songs for the rest of my life didn’t just affect me. It affected Dibs (Chris) and Ian, our crew, and families.

“What else were we going to do? Go and do something else? I have to pay my f***ing mortgage and so we had to do what made us happy .

“We made the decision as a band to carry on with me as singer. Tom knows that we’re there if he needs us. We spoke to him and he knows that. But subsequently, he’s moved on. He went solo before we even knew what we were going to do.”

Taking over singing duties, Pizzorno stresses he never wanted to be a frontman when he started the band as a teenager.

“I didn’t want to be the singer. It’s not my calling. But out of necessity I am now,” he says.

“There’s not been that much time to think too deeply, which is good for me as I can overthink.

“I can go to places when I’m on the sofa, but when I am on that stage the focus is absolutely insane. I just get on with it. It’s like jumping out of a plane.

“As long as you pack the parachute yourself, you’re OK. Once you’ve made the choice and stepped on to that stage, there’s no turning back. You are freefalling and I can’t be worrying about any of it by then.”

Pizzorno says he didn’t want to be “a guitar player having a go at being a frontman” and says he’s taken inspiration from artists he loves like Tyler, the Creator, Kendrick Lamar, Iggy Pop and Mick Jagger.

He says: “I want people to listen to the songs, come to a live gig and be part of the moment — the experience and the f***ing energy of our shows. I just want people to go insane to our music. And that’s what has been happening — kids have been going crazy in the mosh pit.”

Sipping on a cup of tea, the singer and dad-of-two says: “Being the frontman is a different animal, though.

“I’ve always been good in that once the suitcase is home, I’ve left that guy on tour and he doesn’t come home, but it’s about looking after yourself before a gig as well.

“You have to prepare for a gig, be on top and look after your throat. It’s almost being at athlete level — and I’m embracing it.”

Kasabian returned to playing live in October 2021 with a UK tour including two nights at London’s Brixton Academy. They also headlined the Isle Of Wight festival and supported Liam Gallagher at Knebworth in June and the reviews were some of their very best.

“Those shows at Knebworth were just unbelievable. I love Liam and thanks to him for giving us the trust and the support to play those shows.”

With new guitarist Tim Carter and joined live by Rob Harvey of The Music as multi-instrumentalist and backing vocalist, Pizzorno says: “There’s a new energy to our shows.

“There’s also a new generation of people getting into us for the first time. That combined with being locked away for two years means there’s a need for live music.

“We’ve always been about the new. We’ve never been nostalgic. We’ve never made albums that sound like the last. And so that’s why this new chapter is working so well.”

I didn’t want to be the singer. It’s not my calling. But out of necessity, I am now

Pizzorno had put out a solo album, The S.L.P., in 2019 which had also inspired the new record, but now he says: “My full focus is on Kasabian.”

He say: “I had the idea of The Alchemist as I love the idea of a guy in the studio, pulling different genres together to make something new. The euphoria is the bit of creating something special – where you f***ing get that unbelievable feeling.”

The Alchemist’s Euphoria, which was produced by Pizzorno and Fraser T Smith, is an album that combines the musician’s love of hip-hop, dance beats and huge Italian film scores.

“It is a new chapter, but it’s come from the same place that all the other albums have come from. I see it as the next phase,” says Pizzorno.

The album boasts some of the band’s best songs of their career. Chemicals and Scriptvre are already huge live while new single The Wall played out the Lionesses’ win in the Euro final on Sunday.

Rocket Fuel is fuelled by comments critics made about the band and T.U.E. (The Ultraview Effect) is dreamy psychedelic escapism.

‘Grief takes a while’

Pizzorno says: “And in terms of the idea and the vision of the record, the Ultraview Effect is central. That song is, basically three songs together — almost a folk intro, then it goes into electronica and then out into Italian cinema. It’s exciting.

“The idea for the whole album was get as much information as possible within a very short space of time. Attention spans being what they are — mine is bad.

“This album will always be an interesting record. Even if you come back to it in years to come.”

Stargazr is another standout, a psychedelic club anthem that Pizzorno says: “Will appeal to different generations and relate for different reasons. To some people it will remind them of The Hacienda, then others it will sound like Boards Of Canada and the early 2000s Warp music. Others will relate to it because of The Chemical Brothers while now, it’s like Bicep. It just depends where you are.”

He adds that album closer Letting Go is: “Sort of the perfect sentiment for everything. Just let it all go, man. Don’t hold on to things and don’t go over things again and again. We are reborn every minute of the day and on reflection, writing this record has been like therapy.

“Ultimately, Tom made his decision. And then we had to make our decision. And it’s kind of as simple as that. We’ve had to move on and it’s taken time to do that but grief takes a while doesn’t it?”

Pizzorno says now Kasabian are just looking ahead and have already started work on an arena tour in October.

“It’s been tough but we are back and at our best. This music is my expression. This is how I feel.” 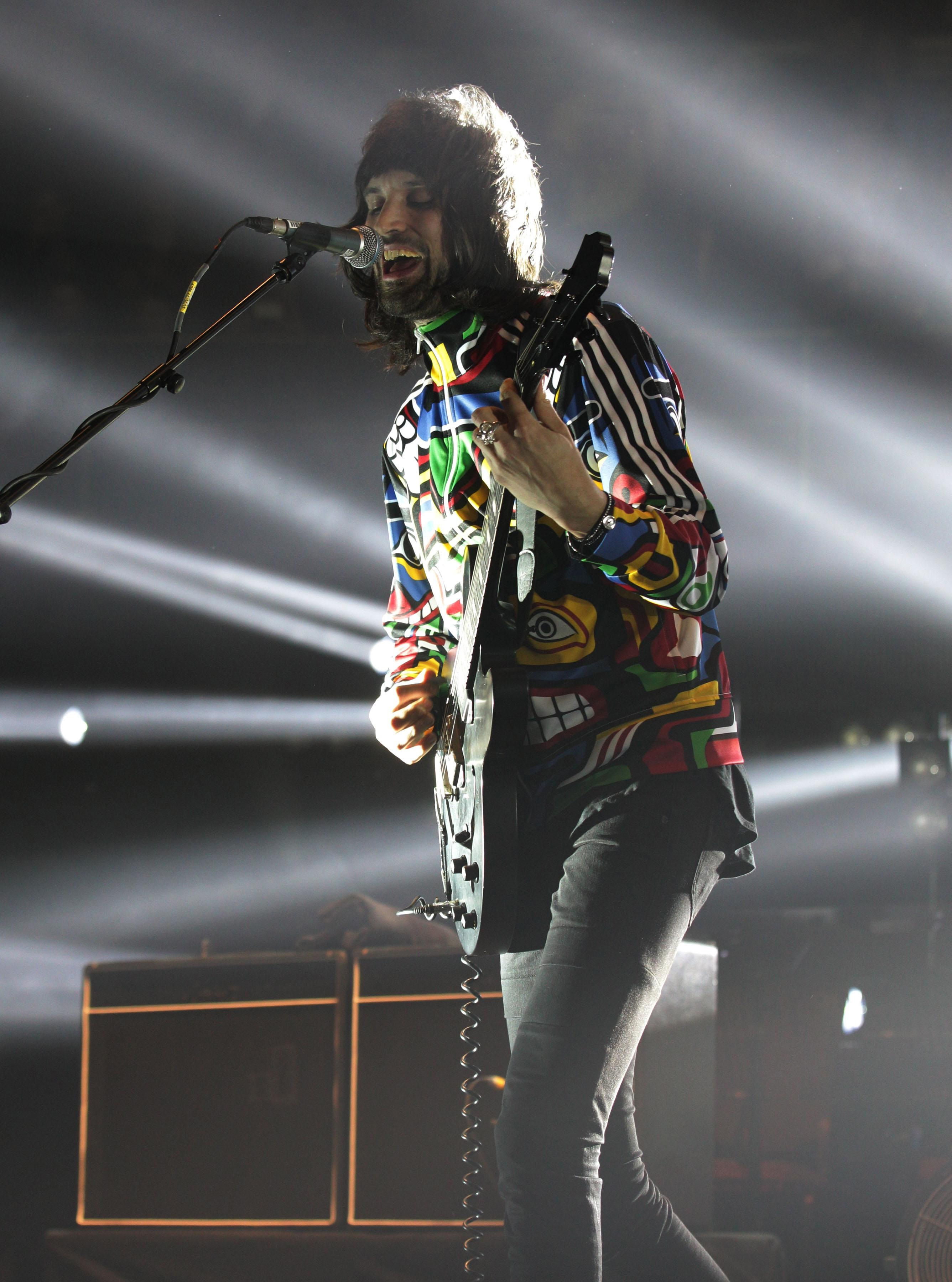 The Alchemist’s Euphoria, which was produced by Pizzorno and Fraser T Smith, is an album that combines his love of hip-hop, dance beats and huge Italian film scoresCredit: PA:Press Association 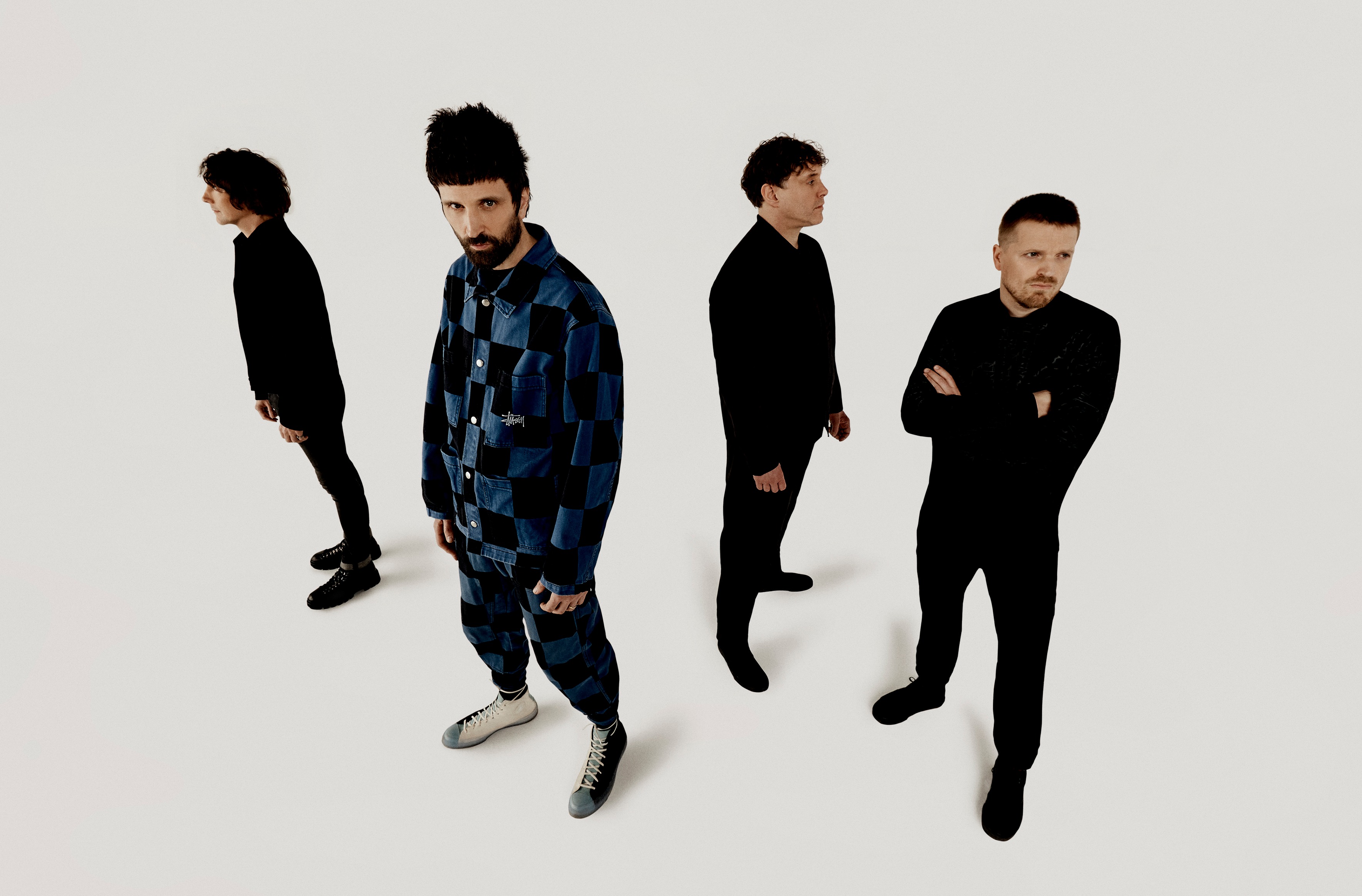 Pizzorno admits he thought about a new frontman, but they kept coming back to the fact these were HIS songs.Credit: NEIL BEDFORD 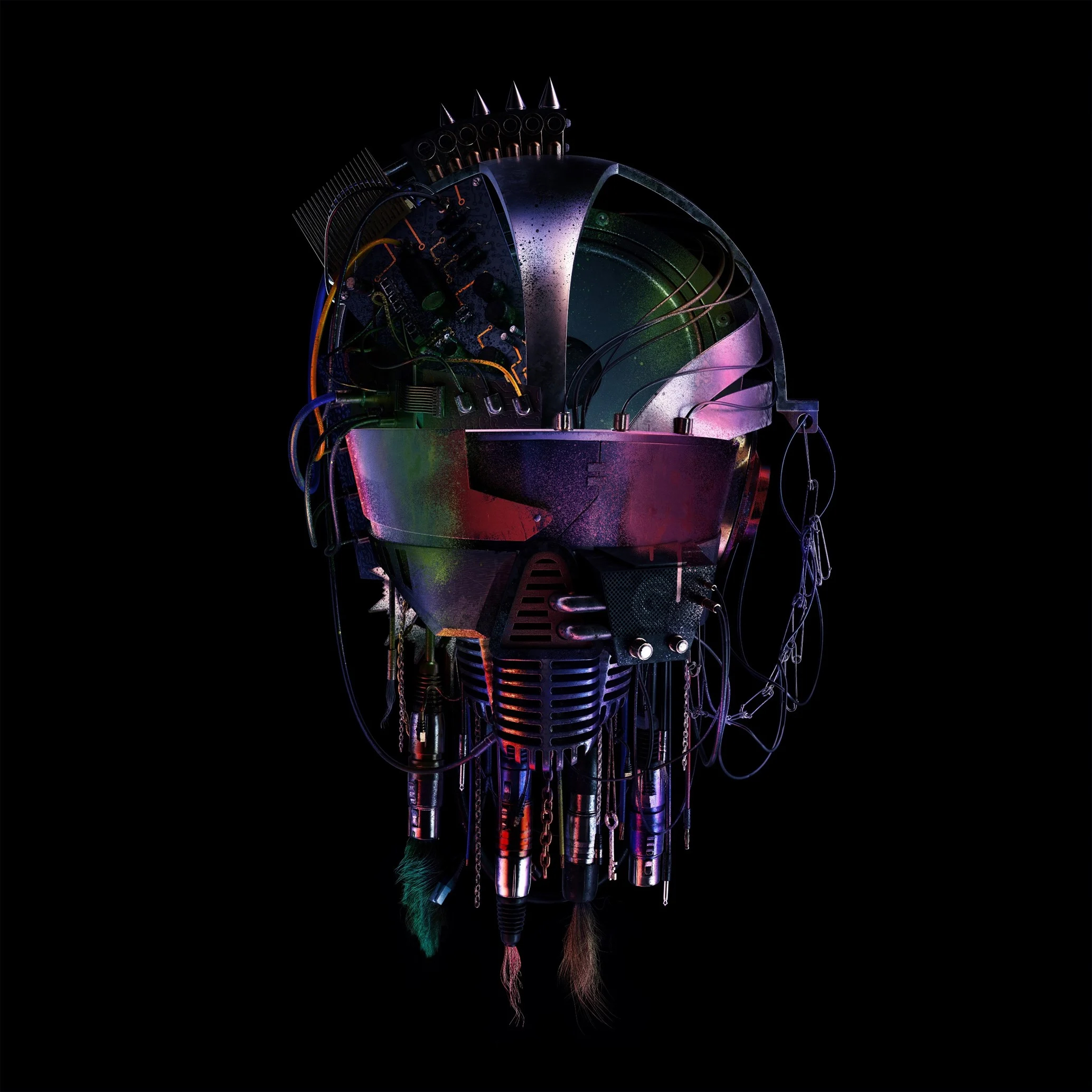 The Alchemist’s Euphoria is out on August 12