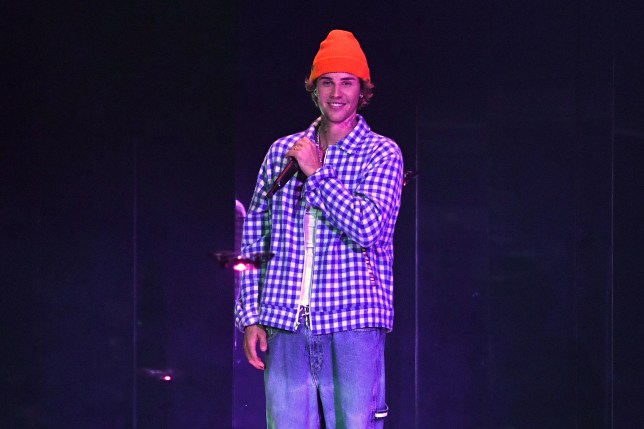 Justin Bieber has been slammed for using clips of Martin Luther King on his new album,. Justice (Picture: Kevin Mazur/AMA2020/Getty Images for dcp)

Justin Bieber has faced backlash for his decision to use clips of Martin Luther King speeches on his new album, Justice.

However, the civil rights icon’s family has publicly shown their support for the pop star amid the furor.

The Baby hitmaker sampled MLK on two tracks – 2 Much and Die For You – which feature on the pop album mostly filled with love songs.

Listeners immediately took to Twitter to share their issues with the choice as one wrote: ‘Justin Bieber has an MLK Interlude on his album. Then, an 80’s inspired pop song about dying for love comes on next.’

Another commented: ‘Justin Bieber really used an audio clip form Martin Luther King jr about injustice as the into for a love song about Hailey Baldwin….because that makes sense.’

One confused fan tweeted: ”justin bieber profiting off of the civil rights movement as a white man is weird. his album is called ‘justice’ and has an MLK interlude but speaks nowhere of social justice, and is focused on love and relationships… huh?’

Another wrote: ‘I really assumed the new Bieber album was going to be about social change and civil rights activism with the title and an “MLK interlude” but it’s about obsessive love and I’m so disappointed. It’s like Rev. Dr. Martin Luther King Jr was used and it feels so wrong. I am sad.’

Justin tweeted about the album’s release Friday and said he was using it to start ‘supporting organizations that embody what justice looks like in action,’ including The King Center, Equal Justice Initiative, and Anti-Recidivism Coalition.

Justin Bieber really used an audio clip form Martin Luther King jr about injustice as the into for a love song about Hailey Baldwin….because that makes sense

yes, weâre a year into a global pandemic but I think whatâs more bizarre is justin bieber releasing an album with MLK samples about racial injustice to sing about his white wife

I am crying cause Justin Bieber really made an album called JUSTICE and threw a few MLK speeches on there for the album to have nothing to do with injustice pic.twitter.com/povaLSZOFv

He also encouraged fans to donate to these organizations in exchange for a chance to win some of his merch, signed instruments and tickets to an eventual 2022 tour.

This led MLK’s daughter Bernice King to tweet: ‘Each of us, including artists and entertainers, can do something.

I still canât get over Justin Bieber naming his album âJusticeâ
and using that MLK audio clip before transitioning into a Fame Monster leftover. Also, no one at the label thought to tell him… this ainât it. I donât know why Iâm so annoyed. But, Iâm annoyed. Itâs dumb pandering. pic.twitter.com/mMiDlPSt7F

I really assumed the new Bieber album was going to be about social change and civil rights activism with the title and an âMLK interludeâ but itâs about obsessive love and Iâm so disappointed. Itâs like Rev. Dr. Martin Luther King Jr was used and it feels so wrong. I am sad. ð­

‘Thank you, @justinbieber , for your support, in honor of #Justice, of @TheKingCenter ’s work and of our #BeLove campaign, which is a part of our global movement for justice. #MLK #EndRacism.’

Justice is the singer’s sixth studio album, Justice and it pretty much serves as an ode to the love of his life.

Over two years after Justin and Hailey secretly tied the knot, it seems the singer more smitten than ever with most of the songs clearly dedicated to his model wife.

What Disney Channel show did Demi Lovato star in?