Festival bosses from the UK and Europe have spoken to NME about the likelihood of artists from overseas being able to perform at events this summer, and how COVID could impact on line-ups.

With many festivals cautiously going ahead after Prime Minister Boris Johnson’s roadmap to normality stating that full capacity live events and mass gatherings should be able to resume from June 21 in England provided that vaccination targets are met and new COVID variants don’t take hold, much speculation now surrounds what a summer of live music might look like.

Many fear that each country’s differing vaccination success and rules around quarantining might make it unviable for artists to tour internationally, while others are hopeful that the coronavirus situation will have vastly improved across the UK, US and Europe by the summer.

As it stands, Reading & Leeds is planning to go ahead over the August bank holiday with acts from overseas including Queens Of The Stone Age, Post Malone and DaBaby, while that same weekend will see the recently rescheduled All Points East in London seemingly  playing it safe with an entirely UK-centric bill including Jamie xx, Kano, Little Simz, Arlo Parks and Slowthai.

These are both a week before Lowlands Festival in The Netherlands, which recently revealed their plans to go ahead with a huge international line-up that includes Liam Gallagher, The Chemical Brothers, Aurora, Sleaford Mods and Yungblud – while admitting that they “cannot predict the future” when it comes to all artists on the bill being able to appear.

“Due to measures that may still apply during Lowlands, it may turn out that not all acts will be able to attend,” said organisers in a statement. “We are not only dependent on measures in the Netherlands, but also on those in countries where acts come from and / or are going to tour. The most important thing at the moment is that all these acts have wholeheartedly indicated that they will be there when the circumstances permit.” 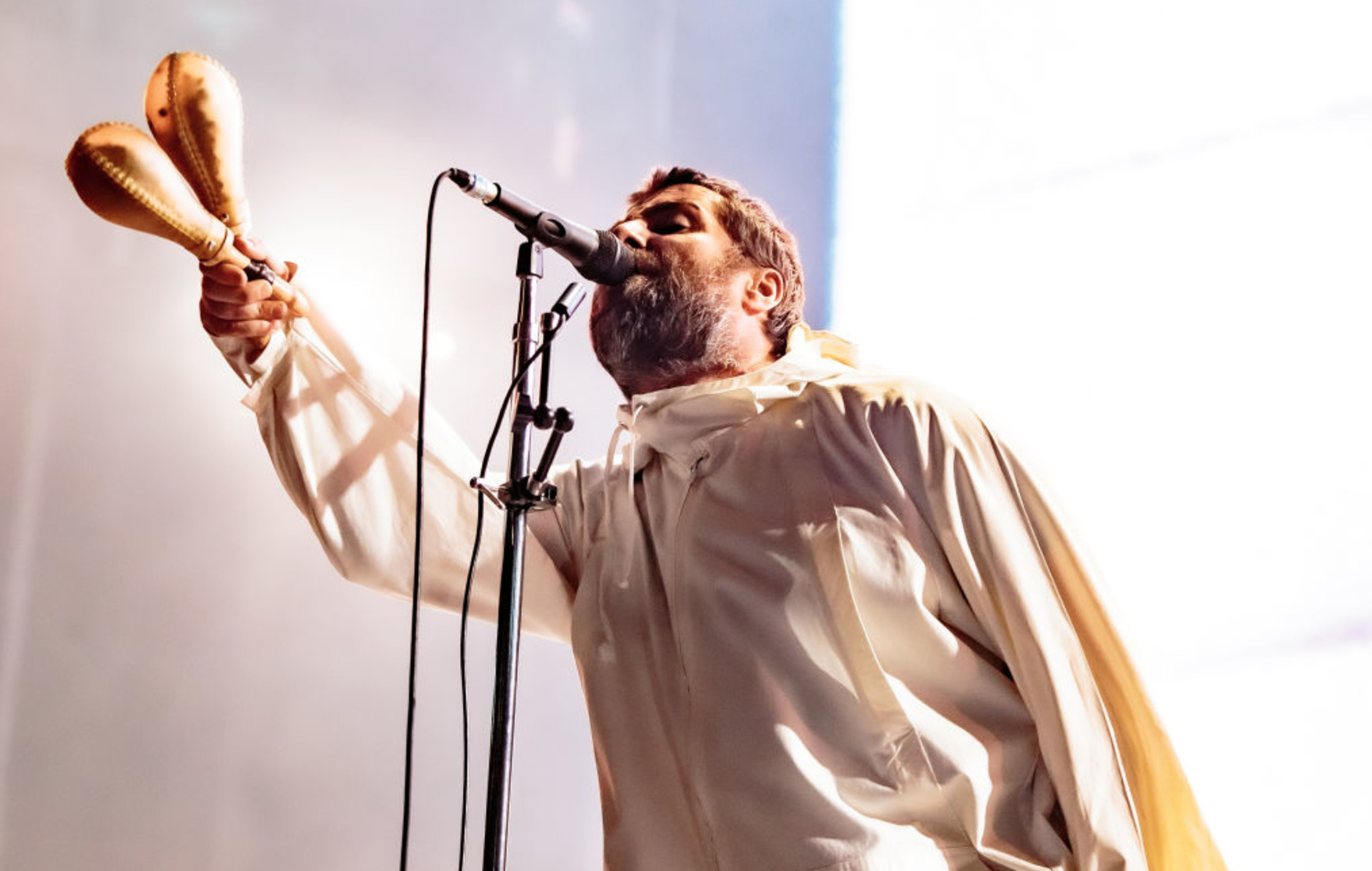 CEO of the UK’s Association Of Independent Festival Paul Reed said that this matched the mood of event bosses across the board – but that their main focus now was on putting on something safe and giving music fans something to look forward to, regardless of who was playing.

“Festival organisers have been talking for several months about alternative line-ups and what they might look like for the obvious reasons of travel restrictions,” he told NME. “I think the general sense out there is that it won’t really matter to audiences this year in terms who headlines and who’s playing.

“After doing 10 years of surveys at independent festivals, we know that over half the audience’s primary reason for buying a ticket was for the atmosphere and the experience, as opposed to headliners. You’ll inevitably see a lot more of that this summer due to the uncertainty around travel restrictions. People aren’t really concerned about the line-up.”

He continued: “It could be really exceptional in that sense. It could be an incredible opportunity for UK artists, and we’re very lucky that we’ve got so much talent on our doorstep that we can tap into. It’s really complicated in terms of international travel because it depends on what’s happening in each country and what the restrictions are. Getting to a point where an artist can tour and do a run of festivals but also quarantine in an economically viable way will be challenging.” 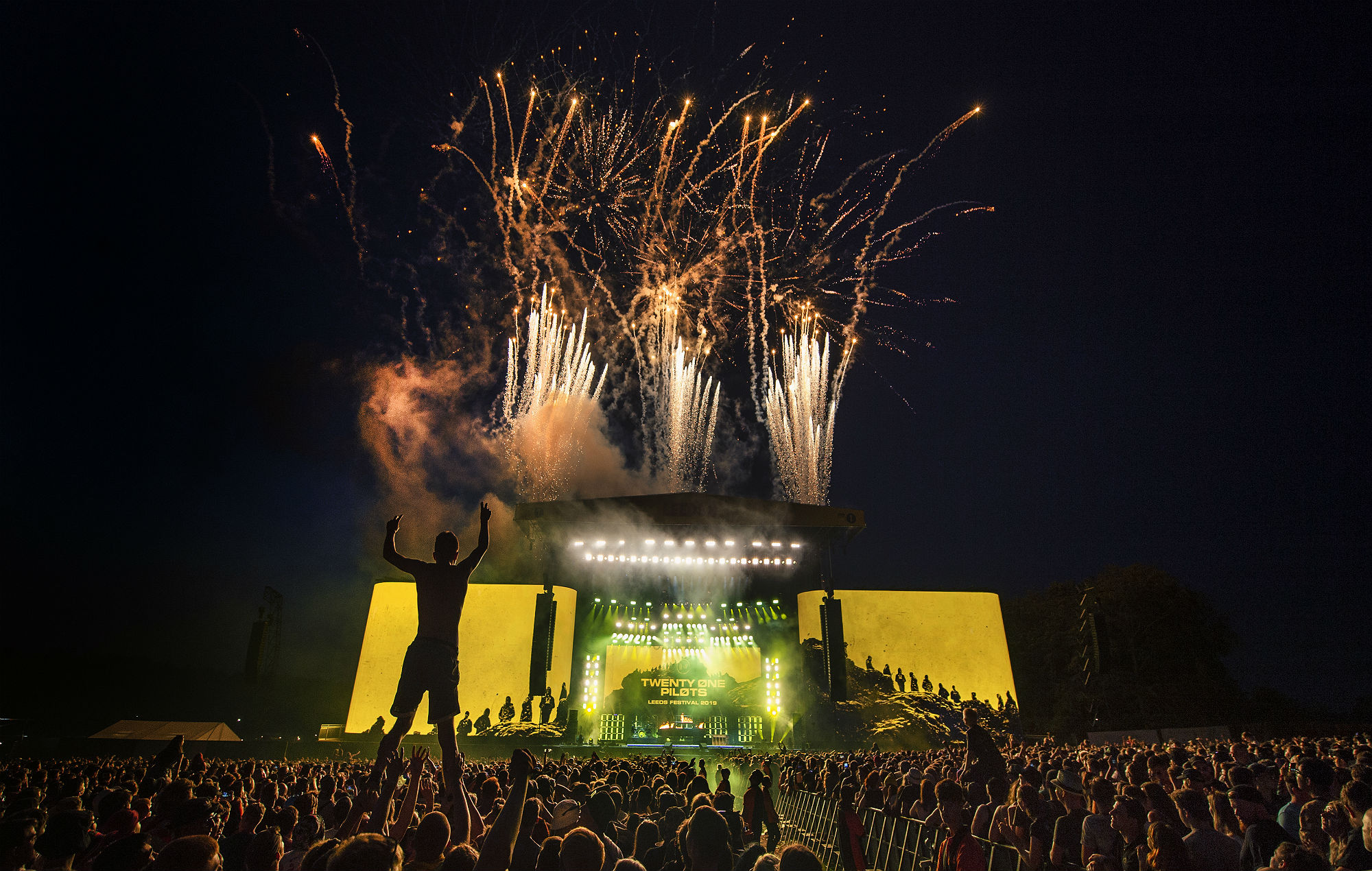 The main stage at Leeds Festival 2019. (Photo by Katja Ogrin/Redferns)

Alex Trenchard, who runs Herfortfordshire’s Standon Calling, told NME that his event’s line-up was heavy on UK talent, but that they’d be leaving some spaces on the bill for overseas talent should things open up.

“The line-up we’ve announced is pretty much a domestic line-up, but not wholly so,” said Trenchard. “Our headliners are Bastille, Hot Chip and Primal Scream – but at the same time we have left gaps in the rest of the bill for acts we’d booked from the US, depending on what happens and how they feel about travelling. We have got two US acts at the top of the bill in the form of Sister Sledge and De La Soul. We’ve spoken to them and they are optimistic that they are going to be able to travel.

“[US President] Joe Biden has said that he wants all US adults to have been offered a vaccine by the end of May. We’re cautiously optimistic about that, and we hope to be able to add a few more American acts if things go in the right direction. We’re open and flexible. If they can’t join the bill, then there’s plenty of amazing British artists that haven’t played a festival show in two years.” 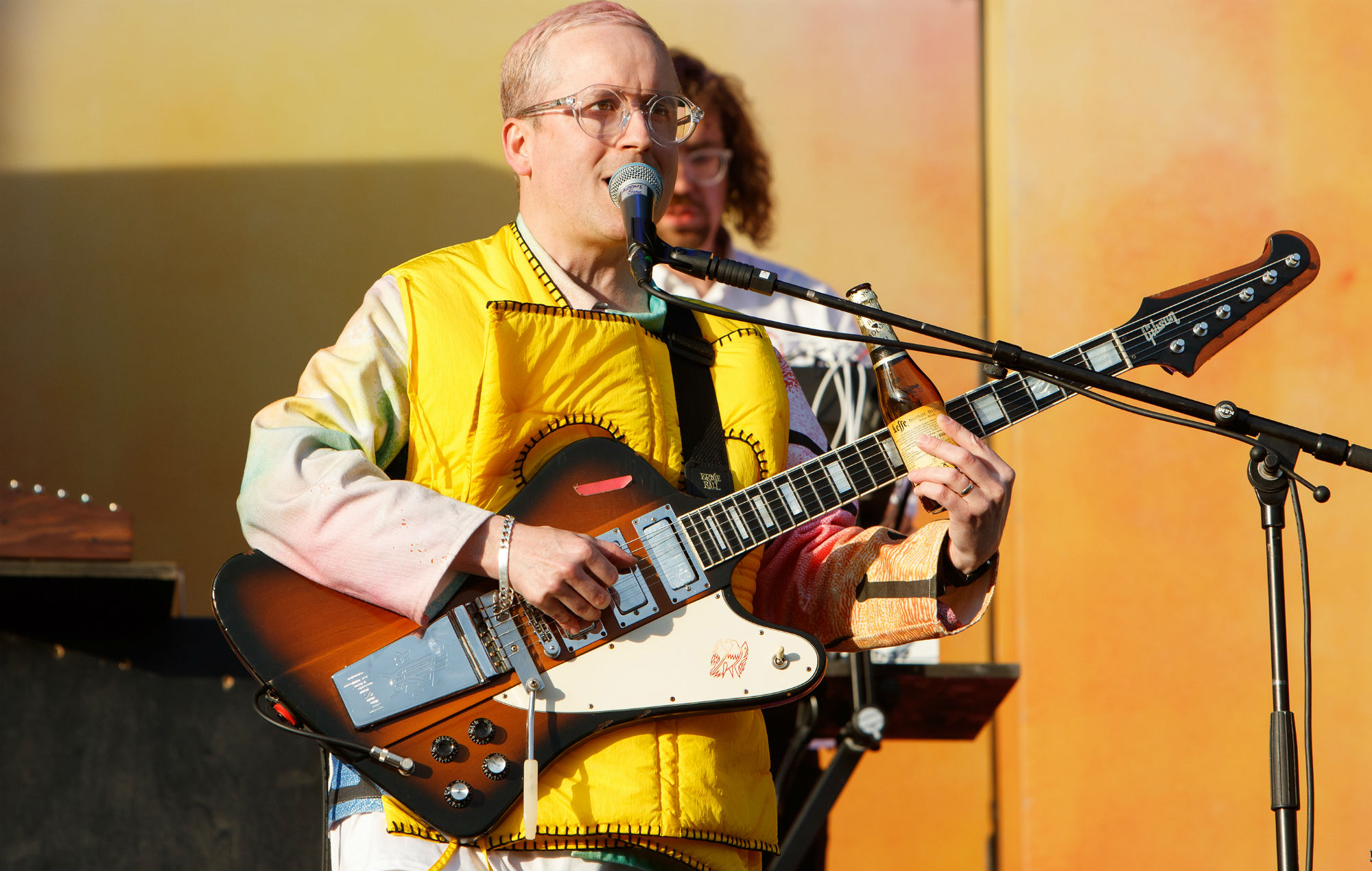 Adam Gregory is director of legendary UK metal festival Bloodstock Open Air, with the event set to go ahead in August to celebrate its 20th anniversary featuring the likes of Judas Priest, Skindred, Kreator, Bury Tomorrow, and Devin Townsend.

“A lot of the line-up is UK-based anyway,” Gregory told NME. “Out of the 140 bands that we’ve got, only 25 or 27 are international – and a lot of them are confident that they can still play. As long as the UK is open for shows, then they can still come.

“We spoke to Judas Priest. They’ve got three members in the US but they say they’re still on and that they’re going to get the guys back from US in plenty of time for the show. We’re relatively fortunate. We’ve had a few acts that we’ve had to drop, but that’s more because of the European position. From anywhere, flying for one show in the UK is not cost-effective. There are some instances of that where instead we’ve booked them for 2022 and been able to replace those bands for this year quite quickly. We’ve been quite fortunate, however there are a lot of festivals out there who might be having a slightly worse time of it than we are.”

Gregory added: “I think that the appetite from fans means that they don’t really mind if certain bands can’t make it, and they just want to get out there and go for a show. They’re a lot more forgiving than they would be in a normal year.”

Dr Michael Head, a Senior Research Fellow in Global Health at the University of Southampton, told NME that the music community can’t be certain what the rules will be for quarantining for overseas travel when the summer rolls around – and that “those policies might change in the last minute”.

“There may be restrictions on people coming into the UK, there may be the need for quarantines depending on where you’re coming from,” he said. “If you’re booking an artist to come to the UK in August, then you can’t guarantee that there wouldn’t be policies like needing to quarantine for two weeks. Booking overseas talent is a logistical challenge and you can’t guarantee what the rules might be at the time of the event.” 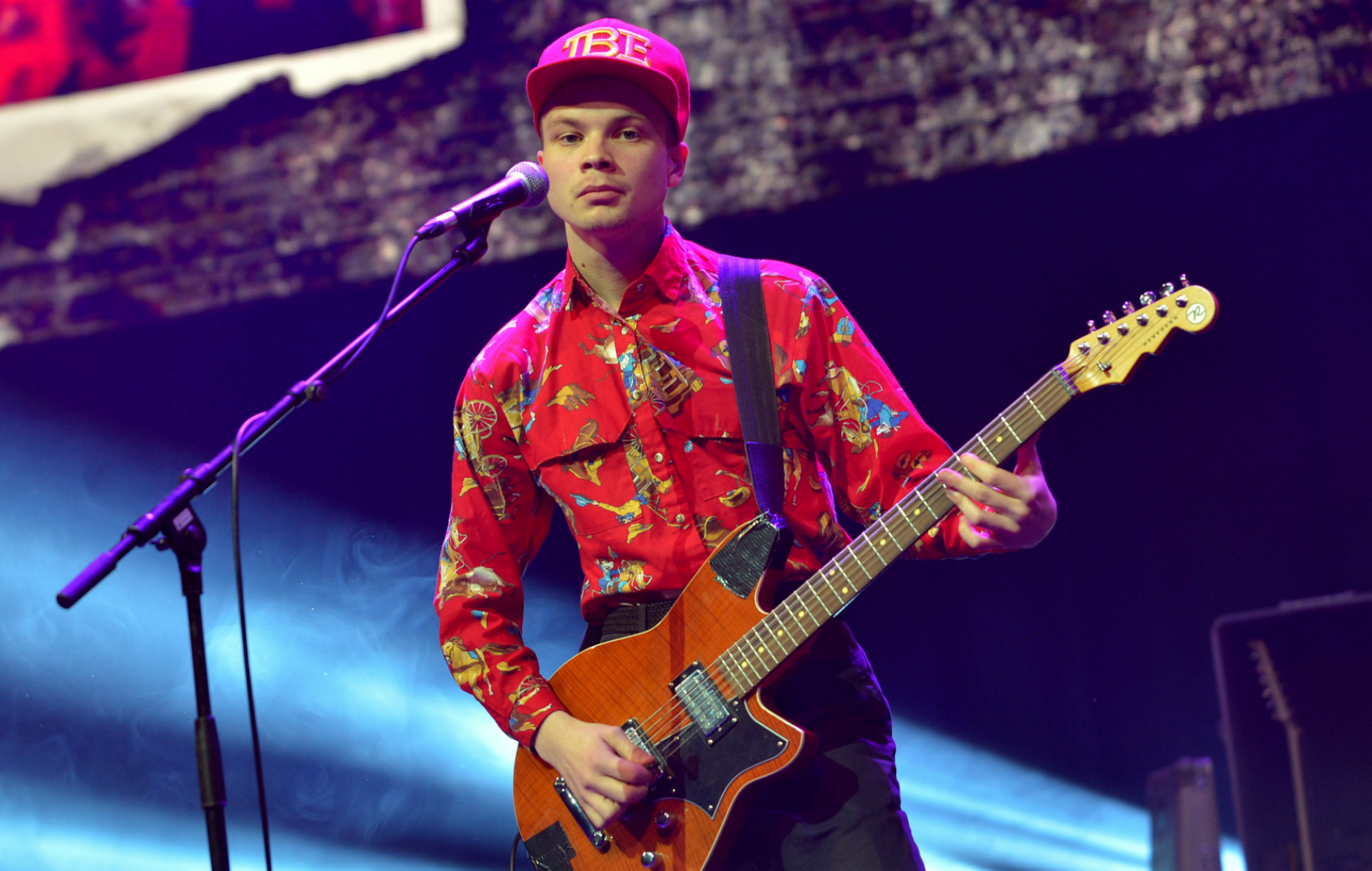 Speaking to NME earlier this month, Isle Of Wight Festival boss John Giddings agreed that his own festival and the UK’s summer at large could be dominated by domestic talent.

“The vibe I’m getting is that we’re largely two or three months ahead of the rest of the world,” said Giddings. “With Americans travelling, it’s 50/50 – but who knows? There are seven months to go and the whole scenario can change.

“It’s going to be the ‘Great British Music Festival’ because it’s based in Britain, but there are enough artists out there wanting to play and entertain people. There’s an appetite out there for entertainment in a field and we’ve got a precedent for delivering what people like.”

With Wide Awake Festival set to take place in London’s Brockwell Park in September with the likes of Black Midi and Dream Wife, organiser Keith Miller previously told NME that this summer could be a real boost for the UK’s guitar band scene, arguing: “If we have to do a mostly UK line-up, then we’ll still have an embarrassment of riches.”

“It seems pretty clear that because the UK is quite a bit further ahead with the vaccine than Europe, it means that if European festivals fall away then American acts will have fewer shows to play,” he added. “Flying over to the UK for four or five days is nowhere near as profitable as playing 25 shows in Europe and then five in the UK. Then there’s the whole question of ‘Will people be able to come and go across Europe to the UK? Will they need to quarantine?’ Then there’s the threat of the Brazilian variant. This is why we’ve deliberately not booked many non-UK acts on this year’s bill.”

Meanwhile in Europe, Madrid’s Mad Cool Festival boasts a stellar line-up that currently includes the likes of The Killers, Foals, Cardi B, Phoebe Bridgers, Kings Of Leon, Red Hot Chili Peppers, Deftones, Haim and Zara Larsson. Booker Cindy Castillo previously told NME that the festival were “currently working with agencies on all possible scenarios for this year” for how COVID might impact on the bill.

“I would say the whole industry is collaborating more than ever to try and make it work the best way, to achieve our plans,” she added. “We need live music to come back to our lives, to everyone’s lives.”

The huge demand for live music this summer has so far seen Reading & Leeds sell out, with Live Nation’s events selling an astonishing 170,000 tickets in the three days following the announcement of Jonson’s roadmap.