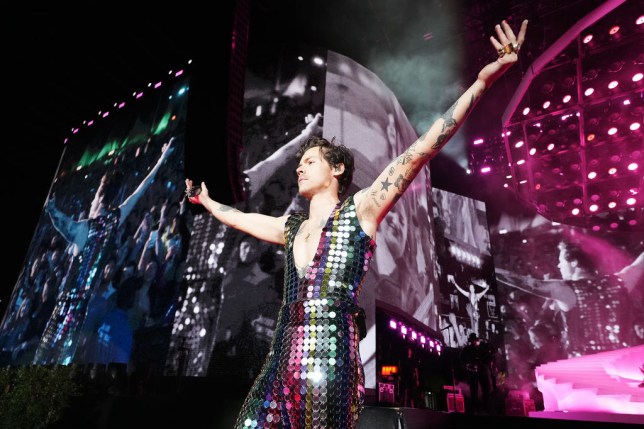 Harry Styles stunned fans with his latest get up (Picture: Kevin Mazur / Getty Images for ABA)

There have been plenty of killer costumes from the stars this Halloween, from Diddy giving us a performance of Heath Ledger’s Joker and Kendall Jenner breaking the internet with her not-so-child-friendly version of Toy Story’s Jessie.

Joining the ranks of amazing get-ups this year is pop sensation Harry Styles after he hit the stage as Danny Zuko from Grease at his latest live show.

Played by John Travolta, Danny is one of the main characters of the hit musical film, starring alongside the late Olivia Newton-John.

Watermelon Sugar singer Styles, 28, even treated fans to some of the character’s iconic dance moves from the 1978 classic during the Los Angeles show, titled Harryween.

Perfectly capturing Travolta’s iconic character, he took to the stage in a leather jacket and tight black trousers paired with black sunglasses and slicked-back hair.

He showcased his stellar costume while performing songs from his third album, Harry’s House, released earlier this year.

Styles even got fully into character treating fans to a rendition of one of the film’s hit songs Hopelessly Devoted To You.

Olivia Wilde, Styles’ girlfriend, was in attendance at the show alongside Babs Burchfield and Megalyn Echikunwoke in their best Halloween glamour for the occasion.

Fans have been praising the singer’s dedication to Halloween, with some claiming he has ‘won’ the holiday.

‘I just want to know where Harry Styles keeps finding the audacity because he shows up on this here Harryween dressed as Danny Zuko and sings Hopelessly Devoted to You and expects me to not die on the spot? okay Harold,’ one person tweeted.

Last year, the star’s Harryween show took place at Madison Square Garden in New York, with styles dressing up in a series of ragdoll costumes.

After wrapping the US leg of his current Love On Tour world tour, the singer will be heading to Europe for a series of shows including dates in London and Cardiff.

Styles will perform at London’s Wembley Stadium for two nights before heading to Cardiff’s Principality Stadium in June.