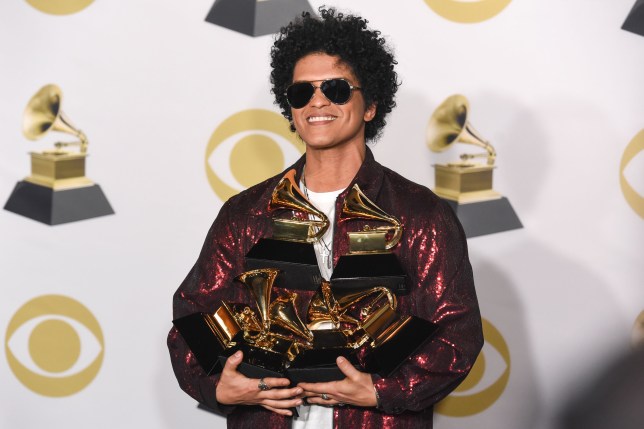 Bruno Mars clearly isn’t afraid to ask for what he wants after making a public and pretty hilarious plea to the Grammy Awards to add him as a performer.

The 24K Magic singer is hoping to return to the spotlight at the Grammys this weekend alongside Anderson .Paak to perform as their new collaborative duo Silk Sonic.

Silk Sonic released their debut single, Leave The Door Open, last week and believe it’s only right that fans see it live for the first time.

In an open letter shared on Twitter, Bruno wrote slightly tongue-in-cheek: ‘Dear Grammys. If you can see it in your hearts to allow two out of work musicians to perform at your show, we would really appreciate it. We just released a song and could really use the promotion right now.

‘We have a lot riding on this record (and the Pelicans game next week, but that’s another story).’

The musician continued: ‘We haven’t been able to perform for a while and we just want to sing. We’ll send in an audition tape and take as many covid tests as we need to.

‘I promise I won’t be extra. We just really want a gig again. I hope you’ll consider this request and give us the opportunity to shine. Love, Silk Sonic.’

Bruno included the hashtag #LetSilkSonic and it’s since taken on a life of its own with fans using the trend to badger the Grammys into giving in.

Reacting to the growing support from fans, Bruno tweeted: ‘Wow this started with just us 2 and now we’re a whole army! There’s nothing we cant do. First the Grammys then the world! Unlimited powerrr! [sic]’

However, Anderson wasn’t feeling so hopeful that their pleas would be met and jokingly offered to perform background for K-pop icons BTS who are confirmed to hit the stage.

‘Bro the @RecordingAcad haven’t even responded… @bts_bighit do y’all need a drummer? #LetSilkSonicThrive,’ the rapper wrote.

Bruno replied: ‘You’re right. I got excited we were trending for a while today. I’m sorry I let you down. I hope you & BTS go on to do great things.’

It comes after Bruno, 35, was forced to defend himself against accusations of cultural appropriation.

If Silk Sonic do get to perform at the Grammys, they’d be in great company as Cardi B, Taylor Swift, BTS, Harry Styles, Billie Eilish and Megan Thee Stallion are among the acts confirmed to perform.

The Grammys 2021 take place on Sunday live from the Staples Center in Los Angeles.