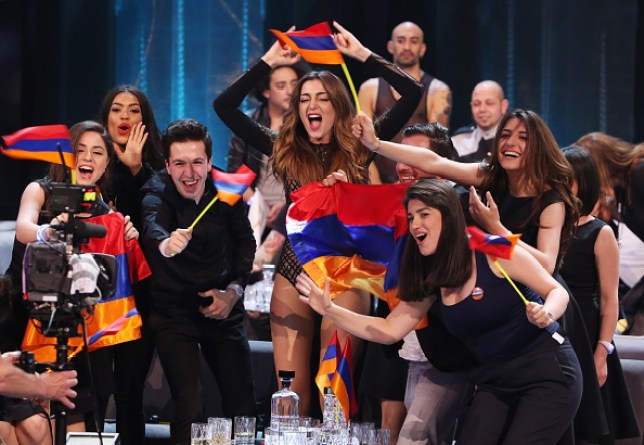 Armenia has been competing a Eurovision since 2006 (Picture: Vyacheslav ProkofyevTASS via Getty Images)

Armenia has pulled out of the Eurovision Song Contest.

The nation had confirmed its participation in the 2021 contest, after the event’s cancellation due to the pandemic last year meant that Athena Manoukian could not compete.

However, Armenia’s public broadcaster AMPTV has now withdrawn from the contest, saying that their proper participation is ‘impossible’.

A statement read: ‘After careful and detailed discussions, the Public Television Company of Armenia has decided to withdraw from the Eurovision Song Contest 2021, considering the latest events, the shortness of production time as well as other objective reasons that make the proper participation of Armenia at ESC 2021 impossible.’

‘Armenia have a great record at the Eurovision Song Contest and always bring excitement and quality performances to the stage. We understand the reasons for their withdrawal and we will miss their hard working and professional delegation in Rotterdam. We very much hope to welcome Armenia back in 2022.’

Last year, Athena Manoukian entered the contest with her song Chains On You.

It had not yet been decided whether Athena or another artists would be representing Armenia in 2021.

Armenia has never won at Eurovision since they debuted at the contest in 2006, but has six top 10 finishes.

Their best result came in 2014, when Aram Mp3’s Not Alone came fourth, losing out to Conchita Wurst’s Rise Like A Phoenix, which won for Austria.

They previously withdrew from the competition in 2012 citing security concerns, but returned in 2013.

Despite their previous success, Armenia failed to qualify for the grand final in 2018 and 2019, so haven’t appeared in the final since Artsvik came 18th in 2017.

Now, 40 countries will compete at this year’s Eurovision, which will take place in Rotterdam this May.

While the EBU is keeping an eye on the changing coronavirus situation, the current plan is to have all the acts perform live in Rotterdam, although delegation sizes will be reduced.

James Newman will represent the United Kingdom after he was unable to compete last year with his song My Last Breath.

The Eurovision Song Contest grand final will take place on May 22.

“His soul and music will live on”

Lady Gaga reacts to fan campaign pushing for Volume II of ‘Artpop’: “We always believed it was ahead of its time”