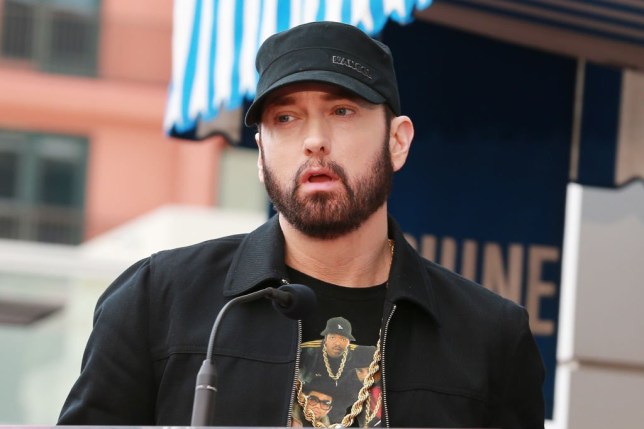 Gen Z might not be satisfied with Eminem’s apparent response to their outrage (Picture: Getty Images)

If Gen Z were really expecting Eminem to apologise for his offensive lyrics after they tried to cancel him, they’ll be sorely disappointed by his apparent response.

Those born between 1997 and 2012 united on TikTok last week in an attempt to cancel Eminem after seemingly only just discovering a line from his 2010 song, Love The Way You Lie, featuring Rihanna.

Eminem raps: ‘I know I’m a liar, if she ever tries to f***ing leave again, I’ma tie her to the bed and set this house on fire,’ which some Gen Z feel glorifies domestic abuse.

Well on Friday, the Grammy-winning rapper released the music video for his new single, Tone Deaf, in which he appears to make a direct address at those trying to boot him from relevancy in 2021.

Tone Deaf is lifted off Eminem’s 2020 album Music To Be Murdered By – Side B and the music video sees the rapper racing through the streets during a police chase.

Although the track was previously released, the timing of the music video and the lyrics it features could be more than coincidence.

Eminem, 48, is notorious for his controversial lyrics which have called out many a celebrity over the past two decades.

Last year, the Lose Yourself hitmaker came under fire for another song on Music To Be Murdered By, which sees him reference the Manchester Arena bomb attack which killed 22 people during an Ariana Grande concert in 2017.

Eminem raps on Unaccommodating: ‘I’m contemplating yelling “bombs away” on the game / Like I’m outside of an Ariana Grande concert waiting.’

As backlash mounted, Eminem released a statement explaining that the lyric had been taken out of context.

The rapper, real name Marshall Mathers, said: ‘In today’s wonderful world, murder has become so commonplace that we are a society obsessed and fascinated by it. I thought why not make a sport of it, and murder over beats? So before you jump the gun, please allow me to explain.

‘This album was not made for the squeamish. If you are easily offended or unnerved at the screams of bloody murder, this may not be the collection for you. Certain selections have been designed to shock the conscience, which may cause positive action. Unfortunately, darkness has truly fallen upon us.

‘So you see, murder in this instance isn’t always literal, nor pleasant. These bars are only meant for the sharpest knives in the drawer. For the victims of this album, may you rest peacefully. For the rest of you, please listen more closely next time.’

So basically, sorry not sorry.